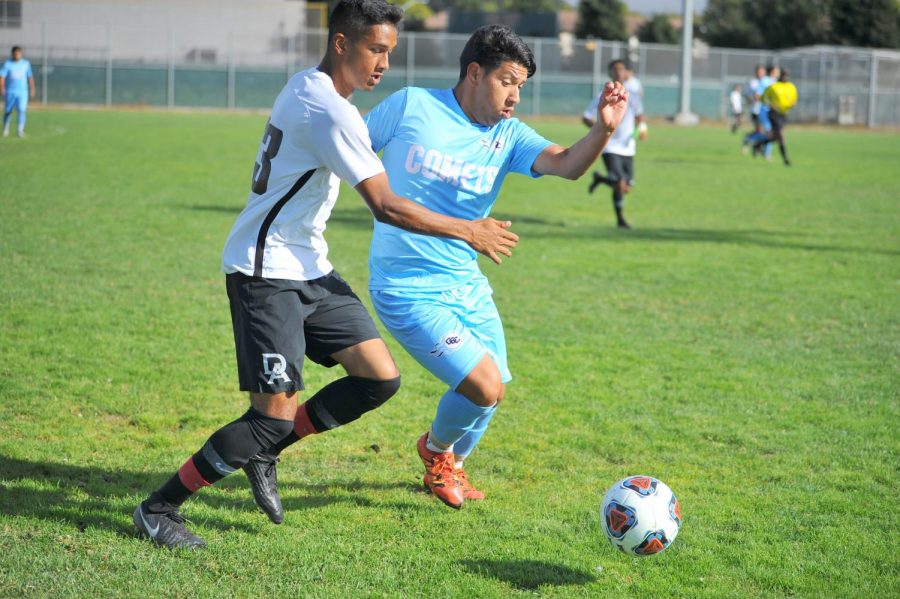 After an 0-9 start to its season, the Contra Costa College (0-9) men’s soccer team played a tough defensive game but struggled to create goal opportunities in a 2-0 home loss Friday against De Anza College.

CCC returns to action Friday at home against Napa Valley College at 4 p.m.

Early in the first half against De Anza the game was deadlocked.

Most of the game was played in the middle of the field with both teams sizing up and feeling out each other’s game plan. CCC pressed De Anza (3-3-1) on every touch, while the Dons attempted to complete deep passes and build from the wing.

Although the Comets went into halftime with four shot attempts to De Anza’s one, the Dons looked to be the more dangerous team.

The Comets missed a first half-chance in the 18th minute after a great offensive build-up involving multiple passes on the wing. CCC crossed the ball to an open Comet forward, but his shot was blocked by a Don defender.

Some Comet players made their case to the referee for a handball, but to no avail.

Comet coach Rudy Zeller, during the first half of the game, repeatedly told freshman defender Devin Martinez, “Stop playing out of the back because we’ve turned it over three times.”

The Dons came close to netting the first score with 20 minutes to go in the first half after the they missed a corner kick. De Anza center back Jarod Puthoff leaped over everyone, but had his clear heading chance go just over the crossbar.

“We are slowly improving, but we still can’t find a win”, Zeller said.

After the 20-minute mark, De Anza began to play with more urgency. The Dons began pressing hard on every Comet attempt to play from the back.

A bit of controversy came late in the first half when CCC stole the ball after a tackle, which left De Anza’s Tyler Khan down on the ground. However, play continued. CCC used the advantage to create a chance on goal but the shot was off target.

De Anza coach Rusty Johnson was furious with the referees. He asked why play wasn’t stopped after his player was on the ground for more than two minutes. The referee apologized for his mistake after a brief conversation with Johnson.

“For us, in the first half we had to get used to the surface because we play on a big, wide turf field,’’ Johnson said.

The Comets had a chance to surprise the Dons with a direct free kick, but Martinez’s shot was saved by Dons’ goalkeeper Gerardo Hernandez for a Comet corner kick, which was wasted.

The game went into halftime tied at 0-0.

In the 47th minute, midfielder Luca Bravo opened the scoring for De Anza with a great chip over Comet goalkeeper Orlando Perez. The shot was assisted by a Jarod Puthoff long ball, making it 1-0.

Onlookers were stunned because of the quickness of the goal.

De Anza swiftly moved the ball through CCC’s half of the field leading to a great chance in front of goal with forward Douglas Stone’s shot missing just high.

The kick was one of his two misses during the contest.

CCC struggled to finish off attacks because of misplaced passes and its attacking structure, which frustrated some fans.

The Comets showed small flashes late in the game, but lacked the numbers up top to score.

CCC fell behind 2-0 in the 82nd minute when De Anza’s Marco Torres sent a beautiful first-time volley screaming into the net. The goal was assisted by Avi Libman.

Zeller said his team has shown great effort through the season and believes that effort, along with the slow improvement and growth of his players are building blocks this season.

“It’s difficult to point out success when you are 0-9. We’ve played hard and our effort has improved. I think we outplayed them (De Anza),” Zeller said.