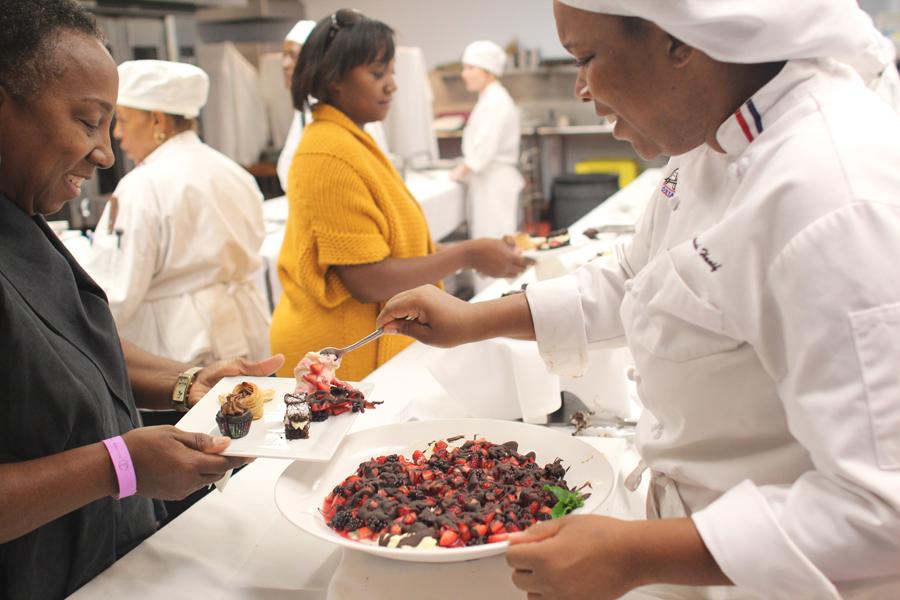 Students, community members and their families came out to sup- port the culinary arts and music departments during the Chocolate and Champagne fundraiser on Sunday.

The annual fundraiser was held in the Three Seasons Restaurant located on the top floor of the Applied Arts Building.

Tickets for the event were $30 at the door, but people who pre- purchased their tickets received a $5 discount.

Many families decided to end their weekend with delicious des- serts and elegant drinks here at Contra Costa College.

Guests had the option of sit- ting inside the restaurant or min- gling outside while a live jazz band, comprised of CCC music students, performed. The entertainment

gave the event a lively feeling, and as one approached the restaurant the band could be heard from the parking lot.

Unlimited desserts and bever- ages seemed to bring the commu- nity together. Former students and local residents all came out to be a part of the event.

Students crafted 25 different types of desserts, Sharkes said. Attendees walked through the kitchen and surveyed each table, sampling the desserts and pastries as they did. The culinary students prepared large amounts of each of the culinary treats, in preparation for the all-you-can-eat advertising.

Visitor Kenny Alvarado said he was “very much impressed” with the treats and he would definitely come back to another culinary- sponsored event.

“Food, wine and music is a good combination,” Sharkes said.

A chocolate fountain, a staple of chocolate-themed fantasies, was also present at the Three Seasons Restaurant on Sunday. The foun- tain attracted more attention than any of the other desserts.

During the event, a raffle was held for the guests. Sharkes raffled

off a prize every half hour to an hour up until about 2 p.m. The jazz band also played until 2 p.m.

Sharkes said the event is a “long term investment.” The vendors and the culinary department have a close relationship with one another.

“Vendors get promotional benefits and love to do it,” Sharkes said.

The proceeds from the Chocolate and Champagne event go directly to student scholarships.