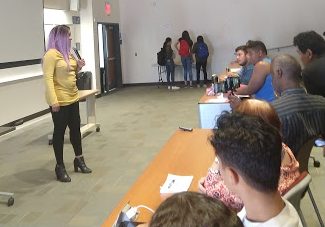 Biologist CaT Bobino speaks about the increasing diversity in Science, Technology, Engineering and Math (STEM) fields at CCC’s STEMCafe on Friday in GE-225.

When CaT Bobino first tells people she is a biologist, the most common response she gets is their first reaction — “You don’t look like a biologist.”

“Well, what does a biologist look like?” she responds. “What does a scientist look like, what’s the preconceived notion of being a scientist? We come in all shapes, forms and colors, likes and dislikes.”

Bobino is a Science, Technology, Engineering and Math (STEM) ambassador and was the guest speaker at Contra Costa College’s STEMCafe on Friday.

The event was held in GE-225 from 2-3 p.m. where Bobino held a presentation in which she told her life story and spread her message of increasing diversity in STEM fields.

Bobino is not only a biologist, but a businesswoman, podcaster and media presenter.

Growing up as an African American woman in Oakland, she was sometimes told she did not have a lot of opportunities.

The scientist’s main message was to get diverse people in STEM fields to share their stories and inspire people to go into those fields. She especially warned them not to let their cultural backgrounds or communities hold them back.

She focused on the inclusion of different people to be represented in STEM — mainly focusing on people of color and women.

Bobino said people like that are underrepresented in STEM, and she wants to break through that barrier.

She even asked the audience to think of a famous scientist in the media who could represent women or people of color.

She mentioned names you might recognize, such as Bill Nye and Stephen Hawking and even Neil DeGrasse Tyson. She pointed out only recently has an African American man, Tyson, been given the spotlight in STEM communication.

Bobino really wants women and people of color to tell their stories on her podcast, “In the Know with CaT Bobino,” so racial diversity can become commonplace in the world of STEM.

After attending Stillman College, an HBCU in Alabama, on a full scholarship and then attending Cal State-East Bay for her master’s degree in biology, Bobino decided to come back to Oakland.

She has worked in zoos, veterinarian clinics, laboratories and has also been on BBC, PBS, KQED, and KOFY-TV. The Bay Area native has also guest starred on the television program “Genius by Stephen Hawking.”

In her many careers, she said one of the difficulties of being a minority was having to prove herself to her colleagues through talking to them and schmoozing.

That resonated with several audience members because as minorities from the Bay Area, having to prove their worthiness can be crippling to their self-confidence.

Chemistry major Rosa Lopez said she decided to come to the STEMCafe last-minute, but it was so worth it to her.

She stayed because she got inspired by Bobino and could relate to her, growing up in the Bay Area and being told by her community her options were limited as a Latina woman.

Bobino’s business, In The Know Consulting, LLC, introduces STEM to children and continues diversifying the field of STEM by helping people through their educational careers and their goals in STEM.

During the presentation, Bobino said even if someone is not interested in STEM, there are so many educational opportunities out there if they just look into it.