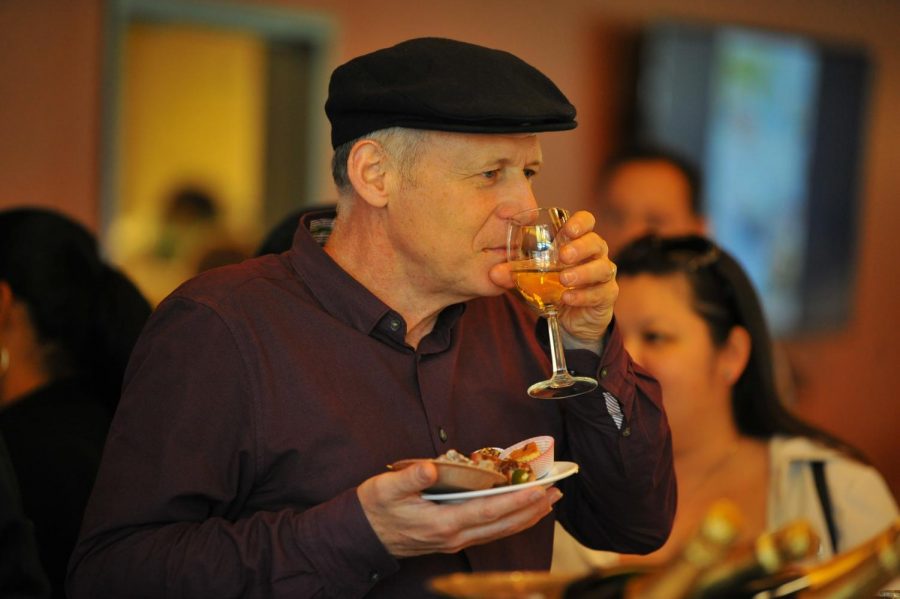 Pianist Walter Bankovitch takes a sip of champagne at the annual Chocolate and Champagne event in Aqua Terra Grill on Oct. 12.

With over 30 appetizers and confectioneries to choose from, and more than two hours of live music, Aqua Terra Grill was busy with customers on Oct. 12.

The event took place from noon to 3 p.m., but people started leaving at around 2 p.m.

Culinary arts professor Elisabeth Schwarz said the event was successful and she was happy to have the community’s support.

Students from the music department performed just outside the restaurant for about two hours, beginning with three instrumentalists and two vocal soloists displaying their talent.

At around 1 p.m., CCC’s commercial jazz vocal ensemble JAZZ-ology performed its set to entertain the customers of Aqua Terra.

There were a few seating areas outside for diners to enjoy their food and watch the performers, but throughout the duration of the performance, few people sat outside.

Vocal jazz soloist and former member of JAZZ-ology Laura Karst said in past years during the Chocolate and Champagne event, people in the dining hall of Aqua Terra didn’t hear or even realize JAZZ-ology was performing outside.

In response to this, Schwarz said, on the way in customers could see the group was performing and customers were able to go outside to watch and eat.

She said she wished Aqua Terra’s and JAZZ-ology’s sound equipment were compatible so more patrons could hear their performance within the restaurant.

Music department Chairperson Dr. Stephanie Austin, who participated with her students in the event, said every year Chocolate and Champagne is normally advertised only as a culinary arts event. But she wants people to know JAZZ-ology is there — performing, and not only providing entertainment, but also fundraising along with the culinary arts department and more people should know about that.

After JAZZ-ology performed its set of five songs, it was announced that the culinary department would be awarding a scholarship to five of its students.

Dyels attended the event and it was his second time giving out this scholarship.

He is an alumnus of the department and he wants to continue supporting the program.

Hernandez said it was her first time ever applying for a scholarship and she was so excited and grateful to have received it — she said it was completely unexpected.

Nuñes said this was her first Chocolate and Champagne event and she served as the hostess.

She thought it was successful, but wished more people knew about it so they could raise more money for scholarships.