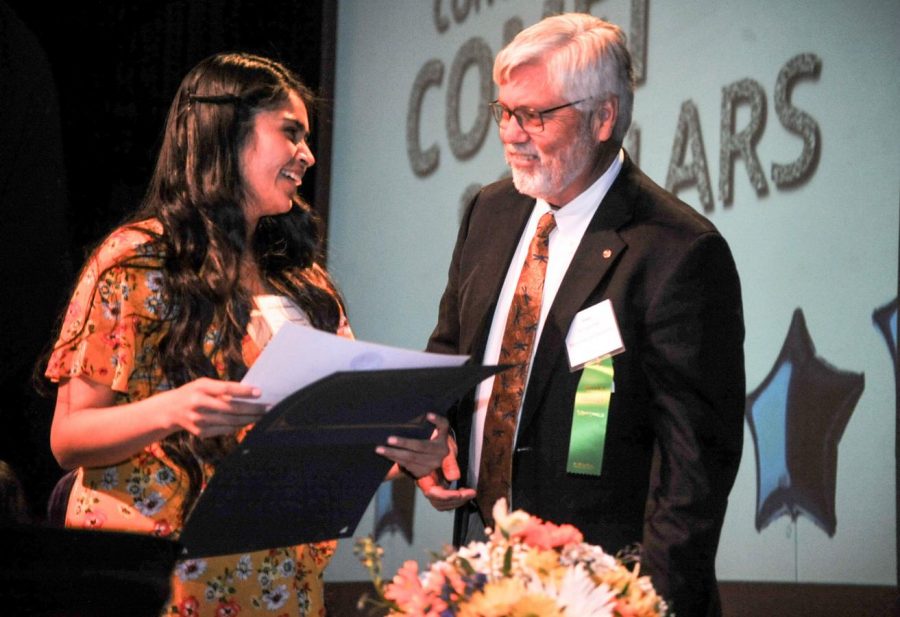 Josielyn Bustamante (left) receives a scholarship certificate from Foundation Secretary William van Dyk during the Scholarship Awards Ceremony in the Knox Center on May 2.

After receiving a hefty donation of $50,000 from community members and author Sam Genirberg in the spring 2019 semester, the Contra Costa College Foundation has again received generous contribution from the activist.

The El Cerrito resident has doubled down on his gift from last semester, donating another $50,000 and has given a total of $100,000 to support CCC students.

You may be wondering why he would give away so much of his money — but the simple fact is he likes CCC and its students.

He is also currently giving away $10,000 a year, via four iterations of the $2,500 scholarship named after him — the Genirberg Family Scholarship.

Marcellino said the students who receive the Genirberg Family Scholarship will also receive a complimentary copy of Genirberg’s book, “Among the Enemy: Hiding in Plain Sight in Nazi Germany.”

The CCC Foundation is a separate nonprofit organization that raises money for programs and students at CCC.

“We fund Historic Black Colleges and Universities (HBCU) tours and we’ve supported some innovative cross-department projects and we are raising money for the food pantry,” Marcellino said.

Essentially, the Foundation raises money and then gives the money away.

Currently, the Foundation’s two biggest programs are its scholarship programs and Wrap-Around Fund.

The Foundation held a fundraiser at Richmond’s Riggers Loft called the “Bring a Friend” event on Sept. 11, where its goal was to get new people to learn about CCC and the Foundation — and possibly contribute.

“The goal of the Bring a Friend event was to try to raise awareness for the college and the Foundation. The more people know about us, the more they can support us,” Marcellino said.

Kale said she works on social media and marketing, as well as collecting contact information at events to keep in touch with the program’s donors and contributors.

The two work with other departments on campus — especially marketing.

Howard said she and Marcellino work together on different initiatives, events and materials and have worked closely together to make the Foundation a success.

Howard and her marketing and media design team help write stories and post them to the CCC website for the Foundation.