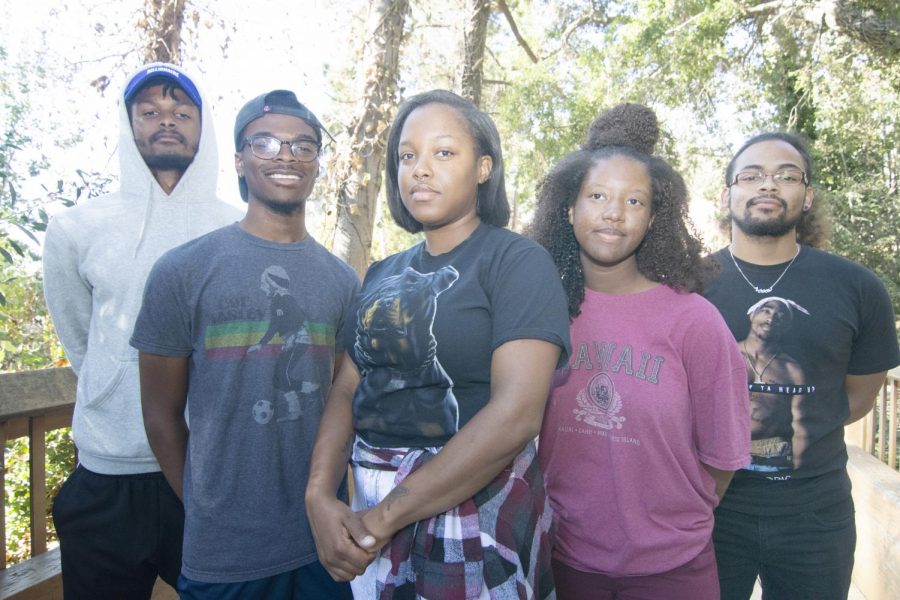 African American studies major Tiye Gordon (middle) has taken up the leadership role in the Black Student Union this semester and hopes to lead a group of black students to promote black-oriented education and create a safe space to breed a black identity.

Tiye Gordon’s educational journey and life experiences have led her to Contra Costa College to study African American studies and have given her the motivation to lead the Black Student Union (BSU).

“I want to create a study space for black students,” Gordon said

After graduating high school in 2007, Gordon enrolled in an academy of arts program, which she did not complete, and later started beauty school in 2013.

After dropping out of that program, she enrolled at CCC in spring 2019.

“I needed to figure out why starting school this time was different from the other times,” she said.

She said taking African American studies classes was the spark to her passion for education.

At her previous post-high school educational institutions, she never saw a day when she was taught by a teacher or professor of black ancestry.

Even more, there was no BSU or a space for black students to come together as black people, she said.

“I hadn’t had a black teacher since high school, and there is something about having the connection with someone that is teaching you that looks like your mom,” she said.

When she started taking classes at CCC, she said she experienced a remarkable thing.

The teachings of black history from a black professor increased her desire to uplift the history of the black students, she said.

One of those teachers is African American studies department Chairperson Carolyn Hodge.

“Tiye (Gordon) is comfortable with public speaking, has consistency and has realized that she wants to be a leading force,” Hodge said.

This semester, Gordon is the president of the BSU at CCC, and she said she wants to ensure her black peers have access to a think tank that can connect black minds to their roots.

“We want to create a group of black people who can encourage each other to continue on with their majors and create a study group around that,” Gordon said. Gordon’s goal is to be a lighthouse for resources to her black peers and guide them to programs that can edify their minds as black people.

Specifically, she wants to make sure black students know that there are African American classes that they can take that fit into their general education plans.

She said she also wants to raise awareness about the drop in African American studies classes offered at CCC.

“Having the African American classes cut affects how many black students see an image of themselves in history,” she said.

Political science major Kwaku Baffo-Gyan said to fight against the societal norm to exclude minorities from educational institutions’ curriculum, black students need to come together and form a union where they can represent themselves.

“People treat you different when they don’t have knowledge about your culture — when you have a different skin color or your name sounds foreign,” he said.

Baffo-Gyan, the BSU treasurer, said no matter what, black students have to take their identity and be themselves.

He said in college it is important to join a group and form a movement, even if it is hard to get people to buy into the idea of communal progress.