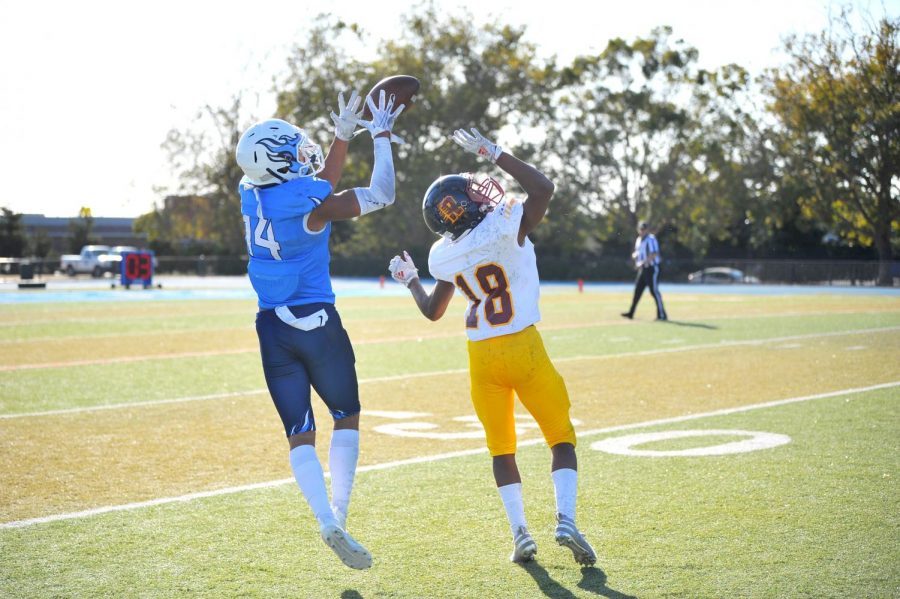 Comet receiver Dominique Latham goes up for a catch during a game on the football field.

For Contra Costa College wide receiver Dominique Latham, life wasn’t as easy as he made it seem growing up in Seattle, Washington.

Latham grew up moving around the state and growing up without a father, leaning on his family and football at a young age. Latham praised his mother for helping mold him into the person he is today — while also motivating him.

“My mother motivates me to do football stuff. She lifts me up after games, good or bad. She’s solid and my rock — especially because she was the father and mother figure for me,” Latham said.

Latham was born in Kirkland, Washington, a suburb east of Seattle. After that, Latham said he lived all over Washington.

The receiver said his transition to the Bay Area was easy for him because he said the weather is somewhat similar and he has teammates from Seattle here.

Latham said even with some teammates being from Seattle and the nice Bay Area weather, he still feels a little homesick.

Comet coach Patrick Henderson said Latham was originally a part of the group of recruits from Seattle but didn’t expect him to be a spark this season.

“Dom (Latham) was a part of the group from Seattle. We didn’t expect him to be a spark that he is. If he keeps it up, he will make waves in the program and (accelerate his) recruitment,” Henderson said.

Latham leads the Comets in receptions, yards, games played and touchdowns, compiling 18 receptions for 233 yards and two TDs this season.

Latham gets through the grind of being away from home because he talks to his mother and brother on the phone every day.

He also credits his history of moving constantly to helping him adjust to life away from his family.

“It’s tough being away from family, but I get to talk to my mom and brother every day and about everything. It’s a good thing to have moved to different places because it helped me with getting comfortable with new people in new places — kind of a blessing,” Latham said.

Cherry said he has got to know Latham in high school and began to talk a lot more during their junior year.

The conversation they had led to Cherry coming to CCC.

“Me and Dom (Latham) started talking a lot during our junior year. He told me he was looking at junior colleges. He’s the one who got me to come out with him to CCC,” Cherry said.

Along with being good friends outside of football, Cherry said they complement each other’s game because of their familiarity.

“When we are running routes, whether he catches the ball or I catch the ball, we help each other succeed. We’re like a dynamic duo. We complement each other’s games very well,” Cherry said.