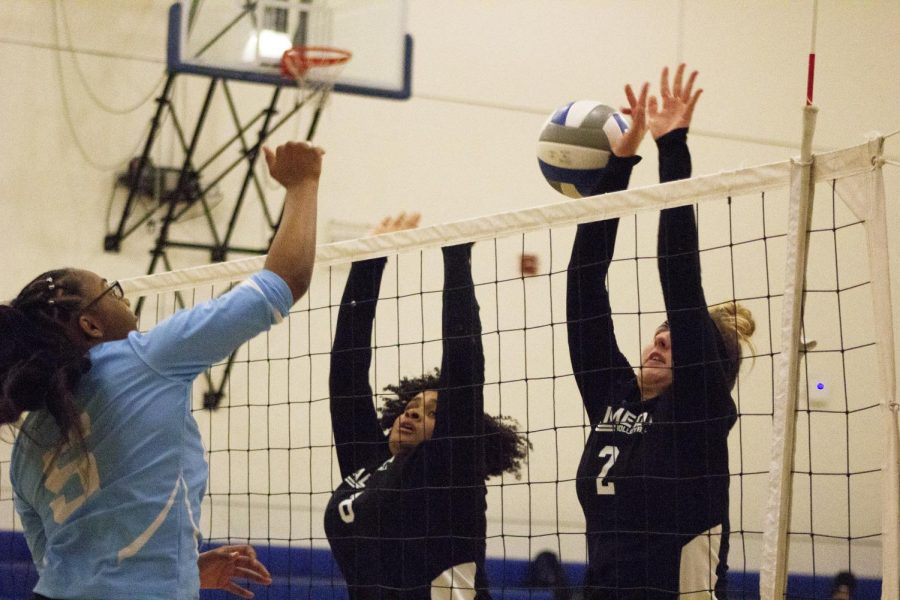 Freshman middle blocker Christina Hall (left) hits the ball past two defenders during the Comets’ game against College of Alameda on Oct. 16 at Pinole Middle School.

Dropping two games in straight sets last week against College of Alameda (3-15 overall, 2-6 in the Bay Valley Conference) and Yuba College (6-8 overall, 4-4 in the BVC), the winless volleyball team is entering the halfway point of its season without a single set win.

The Comets (0-9 overall, 0-8 in the BVC) have struggled all season with their receiving, which culminated in the last two game losses where service receives were a primary factor of their defeat.

Against Napa Valley College on Oct. 9, the Comets lost their first set 25-0, giving up 16 services aces to libero Sophia Green. The trend continued against Alameda when the Comets gave up 22 service aces, 10 of those from outside hitter Camille Selna.

“We have bad coordination on the court. (Alameda) hits a lot of corners and we couldn’t get to the balls,” Comet middle hitter Yarely Escobar said.

The first two sets against Alameda were emblematic of the Comets’ season as a whole. The team failed to capitalize on Alameda’s mistakes and generate its own offense.

The first two sets both finished 25-7, with Alameda dominating behind Selna’s hitting, which put a lot of pressure on libero Jamie Tianero to get digs and keep plays alive.

“We couldn’t get a read on Camille (Selna). They had two amazing hitters,” Tianero said.

In the third and final set, the Comets were able to rally and put together an early scoring run that put Alameda on its back feet. There was a noticeable shift in the team’s energy making everyone play better.

Tianero, setter Kimberly Calip and outside hitter Sydney Thach were instrumental in the team’s scoring run.

Tianero said, “In the third set we all were hyped. We try to keep the energy up after points. We play so much better when we’re happy to play.”

Despite their early push, the Comets were overwhelmed by Alameda’s offensive pressure and lost the set 25-11, losing the game 3-0.

This season has been one of hardships for the volleyball team. With the Gymnasium renovations, the team is practicing and playing home games at Pinole Middle School. In addition, the team has had several roster shakeups that forced the team to integrate new players into the lineup.

Due to the departures, the Comets now have to integrate new players Christina Hall, Anna Miculob and Janna Galang into more substantial roles.

Coach Christy Tianero said another major challenge is managing her players’ busy schedules alongside the added commute time that comes with practicing at Pinole Middle School.

“When we practice receives, we don’t have everyone (there) so the ones who can be there have improved, but when you’re on the court there are six people on the court.

“We’re a work in progress. It’s tough to get everyone to practice,” Tianero said.

The Comets are entering the point in the season where all their remaining games are rematches.

The team dropped its first rematch of the season against Yuba on Friday.