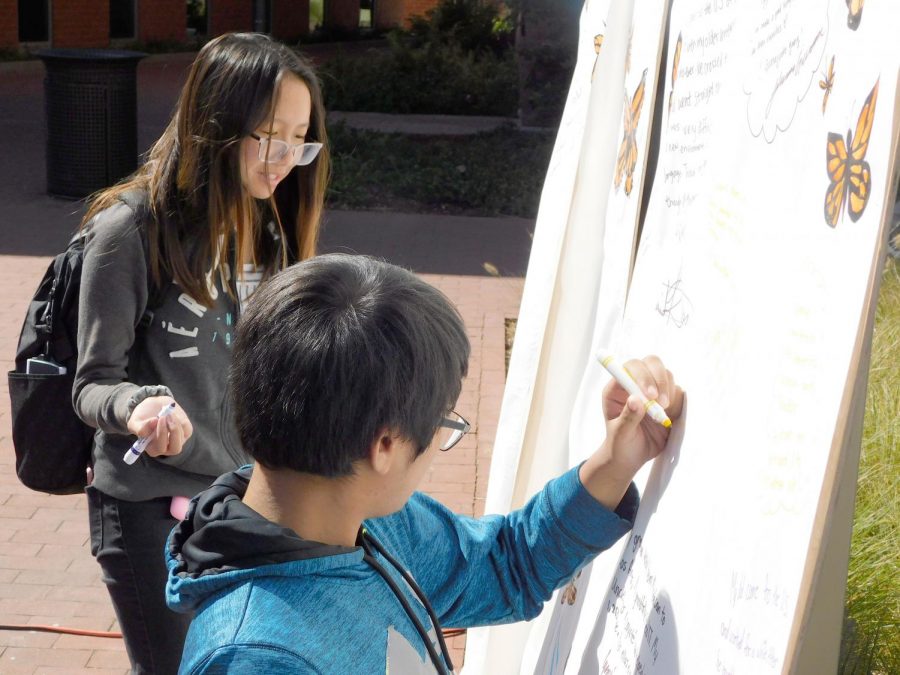 Students write messages on a poster during the annual Undocum- ented Student Week of Action in the Campus Center Plaza on Oct. 14.

In support of undocumented students and as a means to offer access to available resources, the Dreamer Alliance at Contra Costa College held its annual Undocumented Student Week of Action from Oct. 14-18.

This week is a system-wide campaign at California colleges to advocate and provide support and resources for undocumented students in the state.

Over the course of the week, Contra Costa College offered webinars with information on how to pay for college, how to access reputable legal support and how to achieve healing through art.

The week of immigrant advocacy began with an event held in Campus Center Plaza hosted by the Student Life Office.

About 100 attendees were greeted with Mexican bread and agua fresca (fresh fruit flavored water). They also had the opportunity to share their immigration stories on a poster board.

“We hope students engage in this weeklong event,” Student Life Coordinator Charles Ramirez said. “Hopefully, students will be comfortable to share their stories so other students can get a perspective of what it means to be an undocumented student.”

During the course of the week, different factors such as the evacuation of the college due to the NuStar Energy Facility fire in nearby Rodeo negatively affected the student participation in activities.

ASU Vice President Alfredo Angulo said a lack of communication between college administrators and organizers provided a challenge with planning the events.

“Administrators kept switching who was in charge of organizing it, so we had limited time,” Angulo said. “The task of organizing it was originally given to Student Life about two weeks before — but then they decided to task the Dreamer’s Alliance.”

The poor promotion of the event was also a factor in decreased student participation in events like the webinars.

The “Undocuhustle” webinar and the “Unducually” mixer event were merged into one event because fewer than 10 students showed up to each gatherings.

“The week was all planned and advertised within basically a week and a half, so we didn’t have much time to get the word out,” he said.

Angulo said most students on campus were not aware of the events because the Dreamer’s Alliance only had one day to distribute fliers with information about the activities.

“We are hoping that next year administrators don’t throw it at us last minute,” he said. “I understand that due to our lack of full-time administrators, things are taking longer to do. I wish they (administrators) had more consideration for the larger meaning behind this week.”