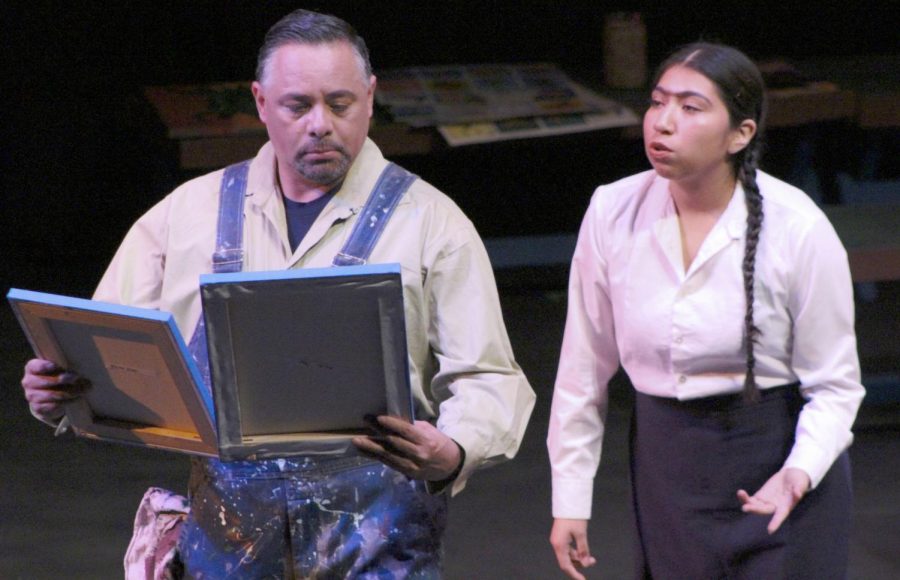 A young Frida Kahlo, played by Vanessa Crisostomo Garcia (right), shows Diego Rivera, played by Carlos-Manuel Chavarria, her artwork during “Frida Kahlo: The Artist; The Woman” in the Knox Center on Oct. 24.

A young actress seamlessly embodied the soul of Frida Kahlo as the drama department put on the world premiere of an emotionally explosive biographical play that gave audiences a glimpse into the heartbreak surrounding the life of the eclectic artist.

In a performance that allowed the story to play out on stage, the cast was led by actress Vanessa Crisostomo Garcia, who plays Kahlo. “Frida Kahlo: The Artist; The Woman,” was a trailblazing effort for the community as it was entirety performed in Spanish, with English subtitles being projected overhead.

While the drama that plays out on stage provided a deep look at what Kahlo’s heartbreak might have been like, it at times felt like more light could have been shed on how it all impacted her as an artist.

Audiences were ushered by the chorus into different events that made up Kahlo’s life.

The show had a strong start and was bolstered by a flurry of scenes performed swiftly, introducing the audience to the unique combination of the strong, smart and trailblazing attitude that makes up Kahlo.

For the majority of the show and carried rather gently to its end, the performance evoked a sense of what Kahlo’s heart went through.

Garcia bares her soul on the stage as her lines were delivered with a fluency that allowed for a visceral display of how Kahlo actually felt.

In scenes of anguish, she would growl in disgust with a face that could not be mistaken as otherwise.

Playing to an underlying duality of joy and sorrows in the show, Garcia was able to transform into the sweetest soul when the ups and downs allowed.

The show certainly put audiences through a multitude of different emotions as tragedies often befall Kahlo. While the audience watched the process unfold at every turn, events were depicted with increasingly dramatic effect.

From the outset of the show, attendees ere exposed to Kahlo’s intensity and passion through her behavior in the face of uncertainty.

Even as she left her stomping grounds in Mexico City, the artist stayed true to her culture.

She adeptly navigated disgust and confusion with the cultural differences she found in America.

Early on, viewers see Cinthya Zuniga playing La Pelona, a skeleton representing death, dancing across the stage reacting to what goes on during scenes.

The rest of the cast appears oblivious to death’s dance.

Zuniga adds a layer of appreciated comedic relief from the show’s tense moments by emoting in response to the actor’s actions.

Adding another layer of complexity to the story, she follows Kahlo throughout most scenes as a constant reminder of the difficulties that come and go in her life.

This dynamic highlighted Garica’s acting strength as screams in Spanish captured the audience’s attention regardless of what was happening on the periphery.

Emotions flew across the stage colliding in passionate moments of love and tragedy as Garcia masterfully drew the audience into each scene.

A story of Kahlo’s valiant soul baptized through a life full of difficulties unraveled on stage portrayed beautifully by Garcia.

The simplistic set of a table and benches, leaving the middle of the stage free, gave room for the actors to fully take up space with their movements in the theater.

Garcia takes advantage of this by showing a fierce physicality in her scenes even as she holds a cane and subsequently hurls it across the stage or sits in a wheelchair swinging her arms.

The show’s chorus, which served as a narrator, did a fine job reciting lines providing exposition for the upcoming scenes.

The play’s rehearsal schedule took a hit prior to production, yet the cast still did its best to perform well — even as they traveled off-script for chorus scenes.

Once the show gets into a rhythm, it becomes increasingly clear that it is going to be full of solidarity in the face of tragedy.

With every introduction of some kind of positivity in her life, whether it be a new love, new-found independence or acceptance and accolades in the artistic world, there was always a downturn not too far ahead.

This constant emotional pendulum means there was a large task for the actors to accomplish. They were trusted to keep the audience in tune with each beat.

Thankfully, director Carlos-Manuel Chavarria used this set up to his advantage by allowing Garcia as Kahlo and himself as Rivera to combine dynamic performances to portray the famous relationship in the play.

The duo storms the stage with electric energy perfectly portraying the relationship down to the appropriate age gap.

We watch the effects of Kahlo’s relationship with Rivera ripple throughout her life and career as she branches out and becomes a successful artist in her own right.

There were some happy moments between the pair, but mostly the audience watched difficulties and disagreements play out.

With devoted effort, the two thespians brought out a masterful rendition of heartbreak and perseverance.