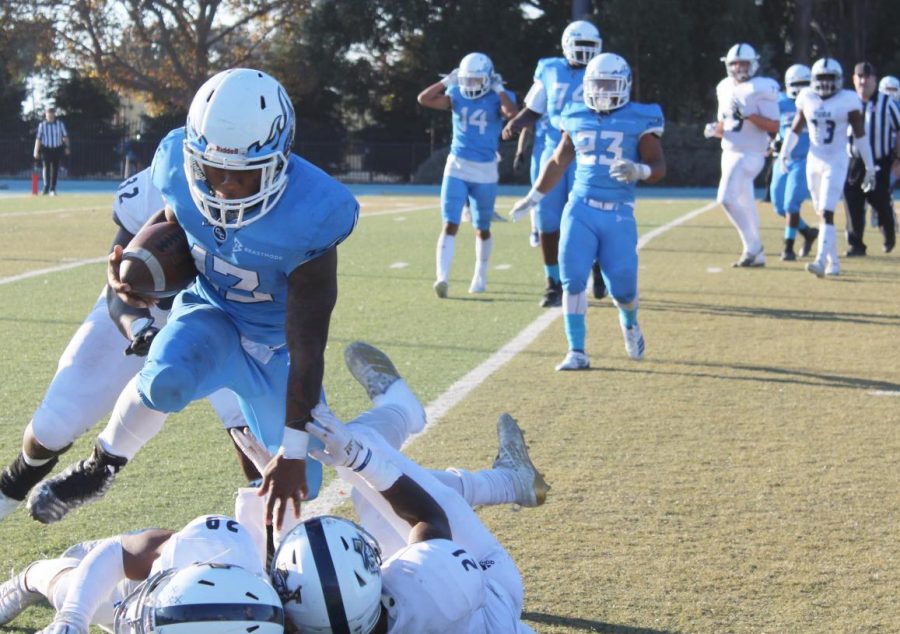 Comet running back Jerald Daniels trucks a defender during a rushing attempt during the Comets’ 30-9 loss to Yuba College on Saturday on Comet Stadium.

Despite making gains on a one-win 2018 season, this year’s football team failed to reach the expectations players and coaches set for themselves this season.

The season ended for the Comets (2-8 overall and 1-4 in the Pacific 7 Conference) with a 30-9 loss to Yuba College Saturday at Comet Stadium.

Comet coach Pat Henderson said, “This was a tough loss. I’m just happy that the sophomores were able to come out here and that players were able to play ball in front of their families.
“We appreciate everybody supporting us. It’s not always easy when you lose,” he said.

For the Comets, the season was dictated by offensive lapses, however the team was vastly improved defensively.

In this game, the Comets offensive woes continued with the only score coming by way of a run when the team was just a handful of yards from the goal line.

Comet quarterback Jaylen Tregle said, “This game was hard fought. That is what the sport is. I’m really proud of my team. It was a game all the way through the third quarter. I think we can be proud of that.”

Despite the final score of 30-9, Yuba College led by just eight points in the third quarter at 17-9.

“The season wore us down a little bit,” Tregle said. “But it goes to show how much heart we have considering we played with low numbers during games, but we competed all the way through. I think we fought hard all the way to the end.”

Just looking at the Comet squad this season, those who know the size of the team in years past can see there are fewer players in uniform than before.

Henderson said, “One thing that I could say that I learned from this year is that we have to continue to do a good job recruiting. That will help us a ton.”

The fact that there were fewer players on the sideline for most of the season was not simply a matter of recruiting. Nagging injuries have also been a contributing factor to the team failing to provide a complete package of players on the field this season.

“This year we had a lot of injuries. However, we have a lot of good players in the program who will allow us to continue to fight at a high level moving forward,” Henderson said.

Comet coaches were not the only members of the program to recognize there were factors outside what happened on the field that were an impediment to the team’s ultimate success.

Freshman Jonah Barnes-Moore said, “We did some good things this season, but we definitely have to get better. A lot of it comes down to getting new players in.

“We had some adversities when it came to injuries along the way, so we’re just looking forward to next year. However, our main priority is making sure we clean up the mistakes that we had this year,” he said.

“We play hard, but sometimes playing hard is not enough, especially when you have injured teammates,” Ma’ae said.

Despite the disappointing record, and finishing the season with a loss, Henderson remains cautiously optimistic about his team’s chances moving forward. He also commends his players for supporting each other and fighting with unity through the ups and downs of what felt like an extremely long season.

“Each team is special. I have always appreciated how this team comes out and fights. I appreciate those guys for that,” Henderson said.

“They do a great job with building relationships with each other and regardless, win, lose or draw, our players are always willing to go the distance for us.”