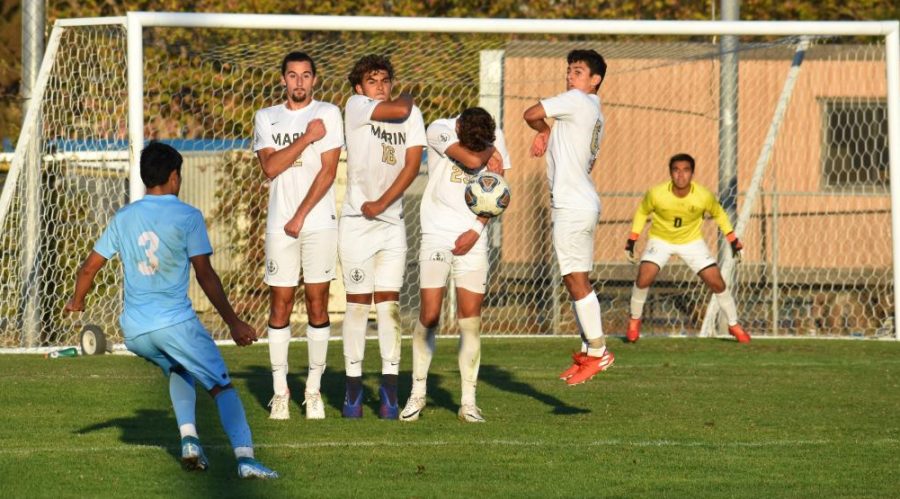 A tough season is nearing its conclusion for the men’s soccer team after the team lost its sixth straight game, its second longest losing streak this season, a 4-0 loss Friday to the College of Marin at the Soccer Field.

Contra Costa College’s 4-0 loss embodied the entirety of the 2019 season.

The Comets (2-16 overall and 2-7 in the Bay Valley Conference) began the game without an eligible goalkeeper, which forced the team to play someone with no experience in goal.

Comet defender Devin Martinez said two of his teammates, goalkeeper Orlando Perez and defender Brandon Barajas were out because they both received red cards in CCC’s previous game against Mendocino College.

Martinez said, “We were down two players today, Brandon Barajas and Orlando Perez, because we received two red cards in the last game. We didn’t have a goalkeeper today so whoever was willing to go into the box played.”

The Comet who stepped up was freshman Luis Serrano, who began the game in goal for the Comets. He was tasked with stopping the BVC’s leading scorer coming into the game, Marin’s Peter Carroll.

Five minutes into the game the Mariner’s (5-12-2 overall and 4-3-2 in the BVC) Carroll put his team up 1-0 after receiving a diagonal pass in the penalty box. The striker then completed the shot, which deflected off a Comet defender.

Shortly after the Mariner score, CCC wasted a good chance to get on the board after striker Eliezer Paul-Gindiri’s shot missed wide wasting great build up play.

Marin controlled the pace of the game for the majority of the first half, allowing CCC some chances but nothing concrete.

Carroll put away his second goal of the day after hitting a half volley inside CCC’s penalty box. His score gave the Mariners a two-goal lead in the first half.

Throughout the game both teams got physical at times, with play remaining chippy after a whistle was blown.

Mariner coach Geoff Aguiar said the chippiness was a result of the referees not doing their jobs.

“It’s on the officials to do their jobs,” he said. “When they let things go, it gives (the players) a mindset that they can get away with things.”

To start the second half, CCC switched goalkeepers and allowed midfielder Hugo Lopez a shot in goal for the Comets.

Although both Serrano and Lopez made good saves at times, it was clear they’ve never played the position before.

The Mariners scored a third goal when defender Dany Rodas finished off a thorough pass on CCC’s right wing for 4 minutes into the second half.

Following the score, the entire Comet defense pleaded with officials for an offside call that never came.

Carroll finished off his hat trick and capped off a 4-0 win with a solo run into the Comets’ penalty box, after receiving a throw-in on CCC’s left side.

Comet defender Moises Hernandez said his team played hard in this game and through a tough year.