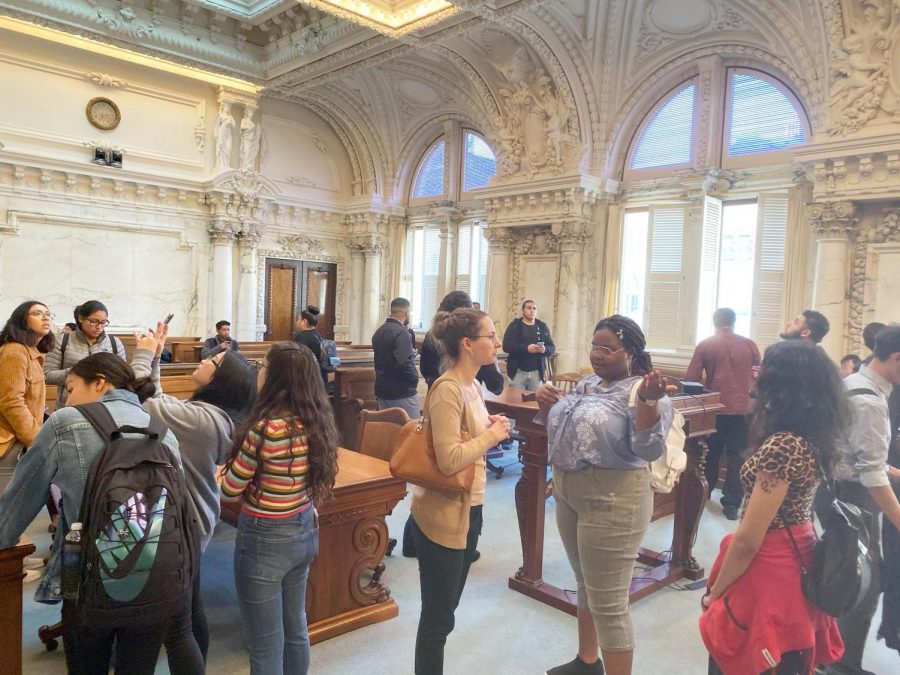 This opportunity offered students insight in both the history written on the walls of the building itself and in how the judicial system and courtrooms in general function.

“This is a unique opportunity and it is great to learn about the judicial system and how things are done in the courts,” political science department chairperson Vanna Gonzales said.

With the help of state administrative assistant Olivia White, students learned about the details in the building and facts and the history behind surrounding the building.

The Ninth Circuit Court is a federal appellate court with limited jurisdiction, however, all appeals heard in this court may be taken to the Supreme Court of the United States.

Most importantly, only cases that fall under federal law are taken by the court including civil and criminal matters.

Students were also able to speak to a staff attorney, Jennifer Nut, who explained in depth the role of judges, staff attorneys and the process in which cases are taken in.

“In the U.S. there are parallel court systems. In the state of California it’s the Ninth Circuit. There are about 60 staff attorneys who work behind the scenes, helping the judges make their decisions, Nut said.

“We also deal with immigration cases. They actually come straight here without even going through trial court,” she said.

Nut explained the cases are each rated on a scale of 1-24.

The cases categorized from 1-3 will most likely never be heard. Death row cases are always rated 24 and have priority over most. This is how cases are reviewed, she said.

However, immigration cases have begun to gain popularity because of news exposure.

In recent years, roughly 265,000 people from the Northern Triangle of Central America have left their home countries. Many of which are seeking asylum due to the violence of gang members inside their countries.

According to the Council on Foreign Relations, “migrants from the Northern Triangle often surrender to U.S. border patrol agents to claim asylum.

In 2018, the United States granted asylum to roughly 13 percent,” almost doubling the amount they accepted in 2015.

In San Francisco, the Ninth Circuit Court handles about 13,000 cases a year, with the majority having to do with immigration, White said.

Students were able to see how the Ninth Circuit Court handled a petition for Fernando Aguirre-Urbina to halt his deportation to Mexico.

Despite it being his native country, he contends that he may be tortured if he returns, according to testimony he gave established in court records.

Aguirre-Urbina’s lawyer argued that under the Convention Against Torture (CAT), Article 3, Section 1, which states that “No State Party shall expel, return or extradite a person to another state where they are substantial grounds for believing that he would be in danger.”