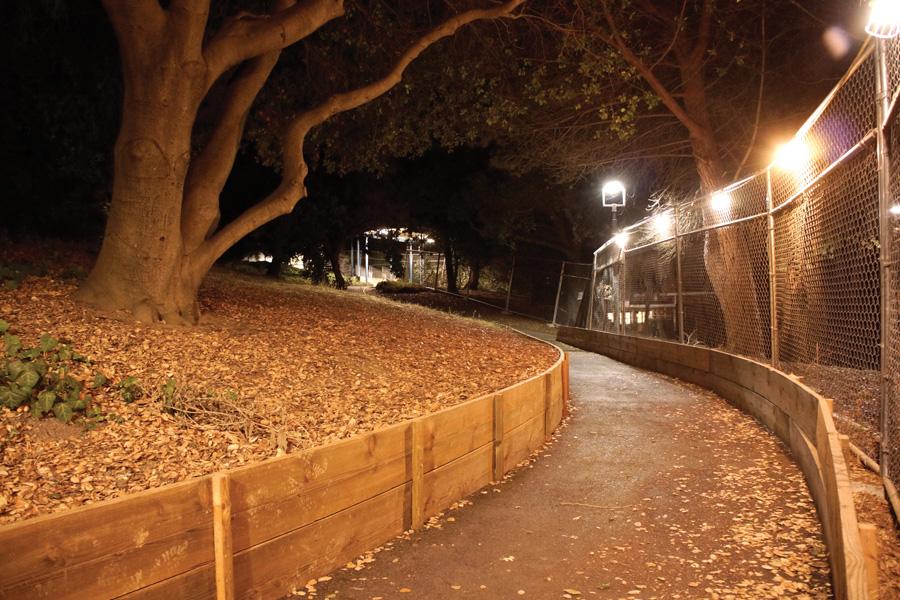 New lights have been installed along the temporary walkway behind the construction area of the new Classroom Building.

Prior to the installation of the lights, the area behind the construction was dimly lit by distant lights on either end of the pathway, which raised concerns for the safety of those crossing campus at night.

“People were nervous out there,” Buildings and Grounds Manager Bruce King said. “Lighting is something that just makes people feel safer.”

The cost of the new lighting system was about $3,500. It was installed by Contra Costa Electric last week, King said.

Student Jose Trujillo said, “The lights help a lot. Before you just didn’t know what was out there. I now feel safe walking around (campus) at night.”

The lights are hooked into the electrical grid on campus and are hung from the top of the chain-link fence along the walkway.

Marisela Tanori, a nursing major who was walking along the path with her son after a meeting with her professor Monday, said she had previously avoided the temporary footpath before the lights were installed because of how dark it was there.

“It was around 8 p.m. the last time I got out of a meeting, so it was really dark. We walked (along Campus Drive) instead, but now that the lights are here I will just walk this way,” Tanori said. “When there’s no lights, anyone could jump out at you.”

King said the lights are on a timer system that is set to have them turn on at 6:30 p.m. and turn off in the morning at 7 a.m. Those times will be adjusted to account for the end of daylight saving time, he said.

In November, Buildings and Grounds will walk through the campus to look for any trees that need to be trimmed to allow more ambient light to shine, and to see where lights could be installed to improve the feel, he said.

He said that he is still receiving bids for the completion of lighting starting at Lot 14 to the PS Building and that Buildings and Grounds expect to have the additional lighting in place soon.

The lights can be seen from Castro Road, King said. “When I was walking down the street (Castro Road) I could see the lights up there. I was like, whoa, that’s us.”

Student Zitlali Resendiz said, “I think there’s enough light on campus now, but it does get a little creepy behind the college at night. One time walking from class I had to use my phone to light my way.”