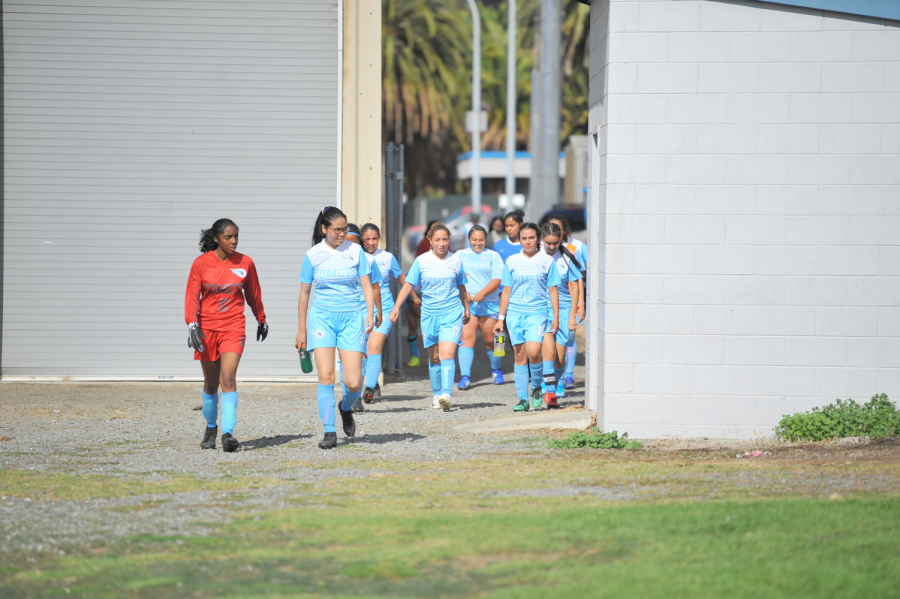 The women’s soccer team (3-10) walks to the Soccer Field for a home game on Aug. 27 during their first full season in over two years.

The Contra Costa College women’s soccer team finished its 2019 season stronger than many who saw the team struggle to muster up enough players to complete a season could have imagined.

The Comets went from not having a team deep enough to compete, to a team with 11 games played under its belt and the wherewithal to bring home victory three times while scoring 10 goals in the process.

The team finished 3-10 in the Bay Valley Conference.

Last year, the team did not gather enough players to field a regulation team and have a full season, however, that changed when coach Ted Steen was hired to restore the women’s program.

Athletic Director John Wade said, “I trust that coach Steen is doing a great job with the team. He knows what he is doing and I’m letting him do his job.”

At the beginning of the season, most of the players were inexperienced, some never having played organized soccer before.

Steen said he is proud of the team for creating a culture of sisterhood between the players.

“We built a nice sense of family around the team that goes beyond just playing the sport. Soccer is not just about competing, it’s about the relationships that you build,” the first-year coach said.

Even though the season is over, the team is still working hard to ensure a stronger come back next season.

According to Steen, recruiting of high school players is just peeking this week and the coach plans to attend multiple local matches in an attempt to lure local players to CCC.

It’s all about just getting in touch with coaches and going out there and seeing the players that are going to be available, Steen said.

His plan is to either check out the seniors who are going to be ready to come in the next year or look at the juniors and underclassmen as potential future additions to his Comet squad.

Of his 11 players who made it through the rebuilding phase of the women’s soccer program, two players are going to be moving on.

One is going to be transferring and one has completed her two years of eligibility.

“Right now, we’re in our recruiting season,” he said. “During the spring semester we will be doing our off-season training, which will be a class. Courses will run twice a week and will include working in the weight room, doing some cardio work and when the weather gets nice, heading back out onto the field.

“In the summer we’ll have our summer class going on, all in an effort to bring the program together,” Steen said.

That’s when the team plans to begin preseason training.

“I actually have a team coming back, so we were able to schedule a few preseason games (for next year). That way, we’ll have some non-conference games to go along with our conference schedules,” Steen said.

Recruiting players is not something that happens totally off-campus, he said. There are many players on campus who would like to have an extracurricular activity in their life, some just need a motivational push.

Middle College High School student Kimyatta Newby, who was thinking about joining the soccer team, said, “I would love to join the team if I had extra time at this point. I play baseball and basketball, but I lack the agility required to play soccer. Also, people who know me say I quit easily.”