‘The Mandalorian’ brings a new perspective to ‘Star Wars’ 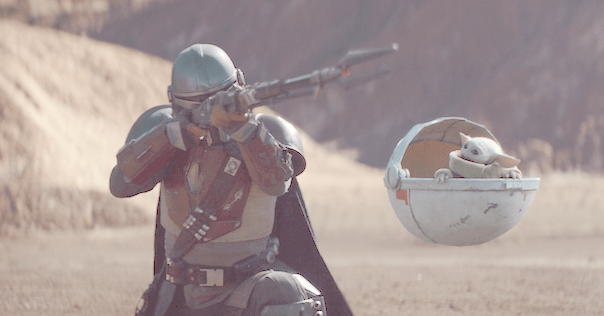 The Mandalorian (Pedro Pascal) aims his cycler rifle with Baby Yoda by his side during the new Disney+ original series “The Mandalorian.”

It feels like it’s been forever since fans have gotten a more down-to-earth “Star Wars” story that doesn’t revolve around a Jedi, the Force or galactic politics, but instead focuses on the relatively normal individuals who reside in the rich “Star Wars” universe.

“The Mandalorian,” an eight-episode miniseries on the new Disney streaming service Disney+, is scratching that long-desired itch for a more personal “Star Wars” tale and is one of the best and most universally loved “Star Wars” releases in over a decade.

Focusing on a Mandalorian bounty hunter, played by Pedro Pascal, the series follows The Mandalorian (Mando) as he’s on the run with his highly desired companion Baby Yoda from every bounty hunter in his side of the galaxy.

The Mandalorians are a culture of notorious bounty hunters known as the best in the galaxy and Mando was considered the best of them all. After being tasked with hunting down Baby Yoda, Mando makes the decision to run away with his previous target and instead become its protector.

From the start, Baby Yoda steals every scene he’s in and every moment is instantly memeable. Disney has almost certainly landed on a cash cow of selling Baby Yoda plushes.

But Baby Yoda isn’t just around for cuteness (he is incredibly cute), but acts as a pivotal part of Mando’s character growth as he shifts from a stoic by-the-book bounty hunter to a more humanized parental figure risking his own health to protect his young companion.

And no, Baby Yoda isn’t the younger version of the well-known reverse-talking Jedi master. The miniseries takes place after “Return of the Jedi,” so the Yoda who fans are familiar with is dead.

No one knows the name of the species to which Yoda belongs, thus we get the name Baby Yoda.

However, while Mando and Baby Yoda evading bounty hunters is the series-long narrative that ties each episode together, the show takes a serialized approach reminiscent of a “Star Trek” series. Each episode can be enjoyed by itself as a self-contained story.

The tight 30-minute episodes have no room for excess and leave the audience wanting more.

It’s refreshing to have short, digestible episodes in a television landscape that sees hour-long episodes as the norm.

The stories are simple but give a new perspective on the life of normal inhabitants in the galaxy as opposed to the grand hand-picked-by-destiny figures of Luke and Anakin Skywalker.

In one episode, Mando travels to Sorgan and assists an ex-Rebel shock trooper Cara Dune in helping the native under armed population destroy an AT-ST walker that local bandits have been using to terrorize them.

In another episode, Mando travels to Tatooine and meets a young bounty hunter looking to prove himself.

Each episode is a simple point A to point B style narrative and it works.

There’s no need for complex storylines.

“Star Wars” is best when the stories are simple and to the point with the background of a grand space opera to give it a shine.

The episodes also manage to have a surprising amount of depth and moments to dissect.

“The Mandalorian” feels like a western mixed with old samurai flicks. Both genres were inspirations for the “Star Wars” series as a whole.

However, “The Mandalorian” leans into this influence heavily.

Episode 4, titled “Sanctuary,” is filled with western movie tropes. The lone, nameless gunman comes into town, takes out the bad guy, and leaves just as fast as he came in.

Other episodes have visual and narrative references to old samurai movies like Akira Kurosawa’s “Seven Samurai.”

Pascal does a great job as Mando, giving the character a personality and life despite still having never seen the character’s face.

The dry humor and small inflections in Pascal’s delivery are great.

The revolving door of characters that come into Mando’s life are interesting too.

Her episode “Sanctuary” has some of the best action scenes in large part due to Carano’s action style influenced by her MMA background.

The vapor farmer, named Kuiil, that Mando meets in the first two episodes is also a fun character.

If “The Mandalorian” is representative of the general quality that will be found from the upcoming Marvel and future “Star Wars” miniseries, then it seems like a no brainer to carve out a part in that budget for a Disney+ subscription.