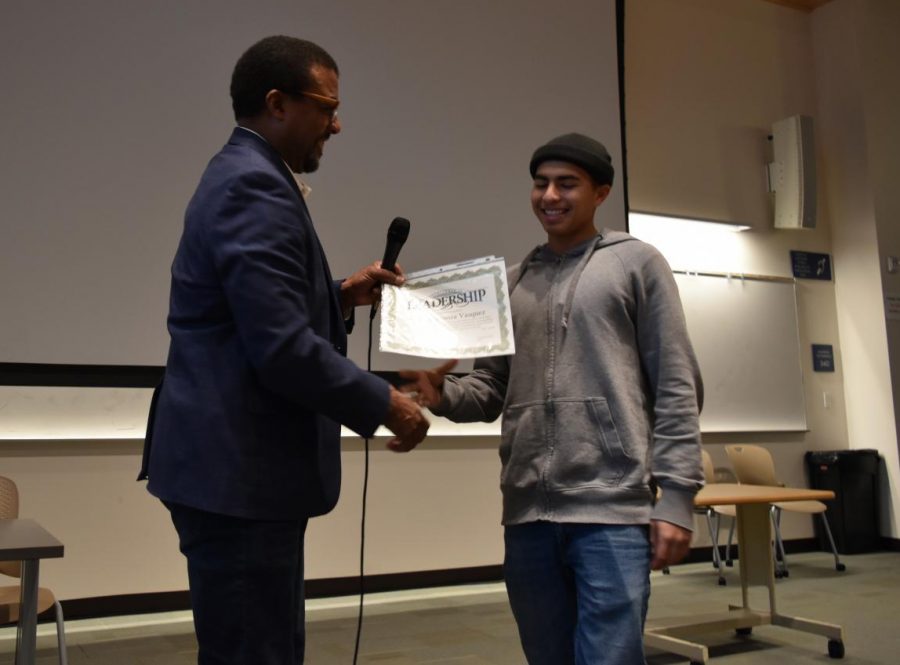 With the end of the semester approaching fast, the Gateway to College program put their grief for the death of one of their students aside to celebrate the achievements of their students during an annual awards ceremony.

On Friday, the program held an assembly to recognize the hard work of Gateway students and more than 30 awards were distributed throughout the collection of students.

“Our students often come into the program out of high school with an average GPA of 1.3. Most of them have completed fewer than half their credits for graduation,” Debro said. “They struggle academically and we want to acknowledge students who are starting to do the things they need to do to be successful in school.”

The assembly began with a moment of silence in honor of Jamarrea Frazier — a Gateway to College student who died from gunshot wounds on Nov. 26.

Debro broke the silence by telling students that he understands the hardship most of them go through when they have to focus on schoolwork on top of having to deal with the feeling of not being safe.

“You deserve to be loved, you deserve respect and you deserve safety. I see your effort and I really appreciate it,” he said.

Some students had a hard time holding their tears and they had to step outside to recover. Minutes later, the event took on a happier tone once the award winners were announced.

Students were recognized for achievements such as good behavior, perfect attendance, most improved student and academic excellence.

“I feel proud of myself for all the hard work. Everything paid off in the end and that makes me feel good because it wasn’t easy,” Gateway to College student Noelia Gonzalez said.

The program gives Contra Costa College an important boost in enrollment because most students enroll in college courses once they graduate from the program.

Gateway to College teacher Morgan LaRue said the program supports students who struggled in high school but have the desire to graduate and possibly attend college. It also teaches them skills and behaviors important to academic success.

Through the program, they learn they do have the ability go to college.

“What’s really inspiring is that when they finish, they know what a community college is — even if they don’t finish with Gateway,” LaRue said. “There is a good chance they will enroll in college later and they still feel part of the college family.”

Gateway to College has some 12 people between staff, teachers and caseworkers who work closely with students and can provide a supportive connection with their family and friends.

“In here, students have a lot of support. But what’s more important is that they have a big family, (at Gateway)” Sciacqua said. “Just by the fact that these students are here every day is already an achievement. A lot of students lost someone this semester, but we pull it together and support each other.”

Every semester Gateway to College recruits students from WCCUSD who have dropped out of school. The students integrate into the program by taking a combination of high school and college classes.

Some students who have graduated from the program move on to higher education institutions.