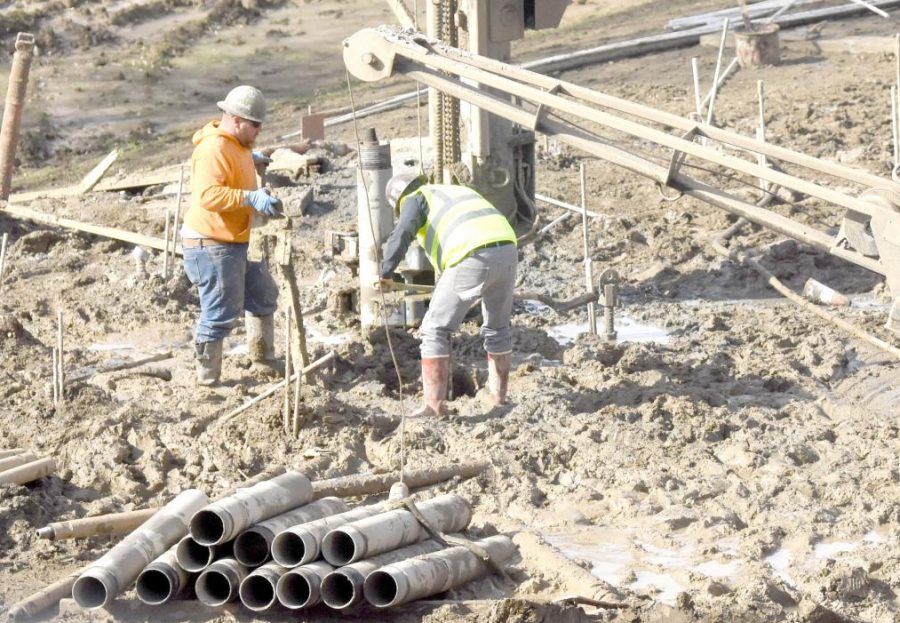 Construction on stage two of the $68 million state-of-the-art Science Complex will soon be underway.

The college district awarded BHM Construction the task of laying the foundation for the new building.

During initial planning for the project, construction of the complex was planned to be done in three stages.

The first stage consisted of three increments, which were demolition, leveling the ground and the installation of utilities.

Increment zero was to tear down the old Health Sciences and Liberal Arts buildings. This was completed by Central Valley Environmental (CVE) during the summer session.

Increment one consisted of leveling the ground and removing excess backfill material, performed by D-Line Constructors during the fall semester.

After increment one was completed, CVE treated the soil with an asphalt seal to keep the ground dry during the rainy season.

Buildings and Grounds Manager Bruce King said the soil is sturdy enough for the heavy equipment to be installed on the construction site.

BHM Construction removed the sealant and is currently driving anchors into the ground for the new building.

The next step will be bringing utilities, such as gas and electricity to the site.

“During the next month or so, they will get the site ready to lay the foundation path,” King said. “Eventually, toward the end of the semester, they might be able to start building up.”

The Science Complex was funded by Measure E and is estimated to be completed in 2023.

Contra Costa Community College District Trustee Vicki Gordon said the construction of the building was part of the Measure E committee that pushed hard to get the funding for the Science Complex.

“We are discussing that perhaps now is the time to bring back to the Governing Board the idea of another bond or measure because we still have a lot more buildings and lot more renovation to do,” Gordon said.

“This is a three-story building that will complement the campus and it will be unique with state-of-the-art architecture,” said Azarnoush. “We will continue to bring usable spaces for students, faculty and the community.”

He said the first floor will house staff offices, a computer lab and six classrooms furnished with anatomy and physiology labs.

The Center for Science Excellence, dean’s office and biology labs will be on the second floor.

The third floor will feature a 55-seat planetarium, laboratories for engineering, ,and chemistry labs as well as designated market space.

The roof would be built to reduce vibration and will be used as an upgraded observation deck.

Faculty from the science department worked closely, contributing ideas with SmithGroupJJR, the developer of the project, for two years.

“I’m just glad for everybody that supported this project because a new science building was very much needed,” Celesia said.

He said the poor circulation of air in the current Biology Building makes it difficult for students to concentrate because the temperature in the classrooms could reach up to 80 degrees Fahrenheit.

“Students deserve a proper science building that will continue to inspire them and support them,” Celesia said.

“This new building is not just for students with science or engineering majors — all kinds of students will be able to use the facility,” he said.

Before the second stage for the Science Complex began, students and administrators gathered at the upper plaza of the General Education Building for a groundbreaking ceremony on Nov. 20.

During the ceremony, Contra Costa College Interim President Damon Bell thanked the community and their partners for their contributions.

Contra Costa Community College District Student Trustee Shreejal Luitel said it is essential to recognize that most of the students in the CCC STEM program come from low income­­­ families and the Science Center will be a much-needed improvement to their education.