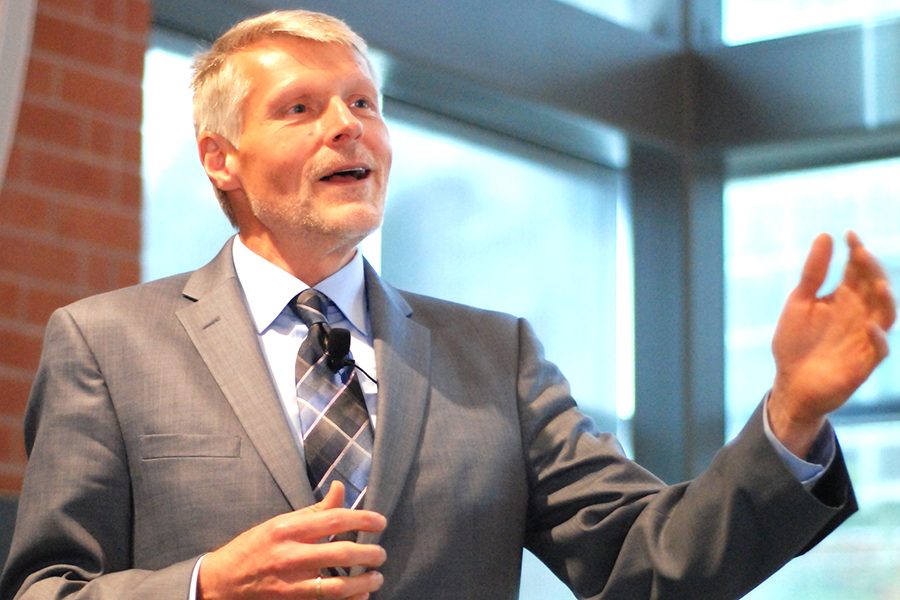 For the short term, the district Governing Board has chosen an experienced, familiar face to fill in as chancellor while the search for a permanent replacement for former chancellor Fred Wood continues.

Interim Chancellor Eugene Huff has a successful record of 19 years within the Contra Costa Community College District starting out in human resources before rising to executive vice chancellor of administrative services.

His appointment could last between a few months to an entire year depending on how soon a full-time hire is found.

“I’m honored to serve as interim chancellor,” Huff said. “My major objective is to help the board through the next couple months as we continue the search for a permanent chancellor. We have accreditation this year, so we’re wrapping up our accreditation reports.”

Huff will balance out his duties across the three CCCCD campuses as the district bounces back from a chaotic year of administrative changes. However, Huff is confident in his abilities.

“When Chancellor Wood was out for surgery in 2019, I served as chancellor for six weeks. A lot of the responsibilities and the day-to-day duties I’m pretty familiar with,” he said.

Huff does not have any lofty ambitions to shake things up in the district.

“As an administrator, my goal is to make these decisions almost invisible to the students in a lot of ways,” he said. “One thing we don’t want to do is have administrative stuff get in the way of our students’ education.”

“My goal as an interim is to keep things steady as we go, make sure we have zero issues around accreditation and help get a good permanent chancellor in here,” Huff said.

Huff plans to work together with Contra Costa College Interim President Damon A. Bell to create an inclusive climate.

“Dr. Bell brings expertise and experience as he’s worked at a number of community colleges with similar issues. I believe he will be able to work with the community on what to do next,” Huff said.

The past few years have been marked with turmoil regarding diversity in upper management at CCC.

“There’s some misinformation we’re trying to make sure folks are aware of. We absolutely seek diversity and have hired minority positions in several of our most recent management hires, most obviously, Dr. Bell himself,” Huff said.

“The district not only professes to value diversity, but our actions indicate that it is something we will achieve,” Huff said.

On Jan. 22, the Governing Board approved the contract to hire our new interim chancellor.

“Hiring and firing of the chancellor is the one role that the board has power over,” district Governing Board Trustee Rebecca Barrett said.

“We had a special meeting where we heard from constituent groups who felt very strongly it should be an internal candidate.”

As a new board president, Barrett said she really wanted an internal hire, since they would already have some familiarity and an established working trust. She said Huff has been very open and accessible.

“While serving as acting chancellor, he came in over Christmas break and spent three hours talking me through different things about the district as I had just been voted in as president of the board,” Barrett said.

His knowledge is precisely what the board was looking for in this transitory phase, she said.

Barrett said, “We’re just looking for someone to keep the district running who knows how the day-to-day is supposed to run. We’re going through the accreditation process and he’s been with the district for over 19 years so he’s at least familiar with that process. He can help lead the district and the president’s making sure that’s all submitted correctly.”

The Governing Board was not looking for someone to rock the boat, instead they sought someone to handle the current situation.

Barrett said Huff identified in his PowerPoint that there are administrative vacancies at CCC. When there are significant vacancies, the job still needs to get done. It just gets moved onto other people who are already working at capacity.

“We’re just hoping that Gene (Huff), in this interim period, can keep all the functions moving forward. He’s going to be supportive of CCC’s interim president as they go through the process of searching for a permanent replacement.” Barrett said.

Interim President Bell is trying to focus particularly on campus climate, she said.

While some are happy to have an inside promotion with his experience, there are others on campus who see this as the continuation of a negative status quo.

“Gene Huff is part of the problem. Gene Huff has no respect for diversity, inclusion or equity,” history, anthropology and geography department Chairperson Manu Ampim said. “Huff has said and done nothing to make sure there’s equity and inclusion of people of African descent, or even Latino for that matter, when it comes to hiring.”

Ampim said administrators have only recently been heeding to the outside pressures from groups such as the African American Staff Association and the Richmond NAACP Chapter.

“Huff was fundamentally involved in the disruption of our campus with bad decisions, removing administrators and advising (former chancellor) Fred Wood with input that made no sense for our campus,” Ampim said. “As a top administrator, he has to be held accountable for the districtwide disruption.”

“Gene Huff is derelict in his duty. He is irresponsible for not clarifying the policy and procedure that would have exonerated VanderWoude and cut a lot of this nonsense off at the head,” Ampim said.

He said while complaints have been heard against previous chancellor Wood, there are still problems residing with our current leadership.

“We tell him what’s best for the campus — he agrees and says he’s going to do A and B. Then he goes back to Martinez and they turn him around. What does he know about our campus? Nothing.

What does he want to know?” Ampim said.

“He certainly can make some changes even in the interim position,” he said.

While there are sure to be some who are upset with the current state of affairs, others are happy to see Huff stepping into his new role.

“He has a wealth of experience in the district which, for me, is a big positive,” Athletic Director John Wade said. “Huff knows the ins and outs of the district, the good things and those that need working on.

“If we look at it in a positive manner, it should give us an opportunity to move the district forward,” Wade said.

In the spirit of improvement, he noted one of the most important things Huff can do.

“The biggest thing for our college is to listen to the needs that we have and try to address those needs,” Wade said. “For me, it would be good to have someone come in and listen, take time listening to everybody and figure out what we need from there.”