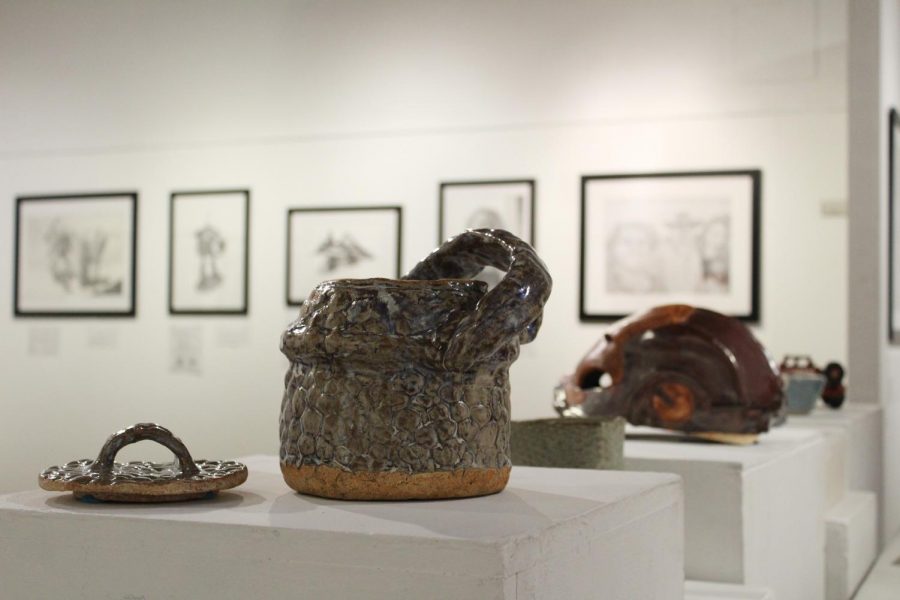 Drawings and sculptures created by Steven Berndt are pictured from left to right — ceramic baskets, a replica Iron Man mask, a ceramic bowl and a replica of Cobra Jeep from the G.I. Joe franchise. This artwork is available for viewing at the Eddie Rhodes Gallery in A-5.

As a self-taught artist, Steven Berndt is no stranger to the term “Growth”, in fact, the word represents Berndt experience as a student at Contra Costa College.

Recalling his work with the tabletop gaming company, Frontline Gaming, until their move to San Diego, he describes how the company’s departure to Southern California left a desire in him to continue creating art.

It was that desire that ultimately led to his decision to attend CCC late in 2018.

This choice would ultimately lead him to where he is now, with his own exhibit at the Eddie Rhodes Gallery, aptly titled “Growth.”

Attendees of the exhibit described Berndt and his exhibit as “creative” and “ambitious”, with a small crowd moving through the exhibit on its very first day.

Berndt describes his exhibit being set up as an essay, with the “introduction paragraph” of his essay being the assignment he received from his instructors.

It ranged from negative space, shading, cross-hatching, to even master copies of classic paintings.

The next part of the exhibit consists of the “body paragraph” which includes a diverse gallery of magnificently detailed artwork ranging from portraits, such as the one dedicated to his sister after her graduation, wooden and ceramic sculptures, to more notable pieces such as his work for the company Frontline Gaming.

Prominently featured is a gorgeous master copy of Guido Reni’s “Archangel Michael Defeating Satan,” a visually remarkable piece that took Berndt over 125 hours to complete, as well as a tribute to the late Bernie Wrightson (1948-2017).

Wrightson is an artist best known for his work on DC Comics’ “Swamp Thing” and for his adaptation of the novel “Frankenstein.”

The final portion, the “conclusion paragraph”, consists of a short and detailed explanation consisting of Berndt’s thoughts on the piece, as well as how the construction of the piece assisted in his growth as an artist.

Berndt describes the pieces he creates not as work, but as something that is his passion, and that such time-consuming pieces like “Archangel Michael Defeating Satan” feel like a breeze because he’s simply doing what he loves.

Berndt’s definition of art is that it is an expression of one’s self, that art is about evoking emotions in its audience which makes the art itself emotionally powerful.

One example of this is seen in the piece titled Unplanned Interior. It is a piece that places subliminal messaging at the forefront of the artwork with words and phrases such as “clutter”, “sloth”, “clean me”, and “chaos” seen throughout the piece.

Overall, “Growth” is an exhibit that is a testimony to the arts program at CCC. Berndt’s use of hues, color, and attention to detail showcases not only his abilities as an artist, but his skills as a student at the college as well.

From the insane amount of detail in his tribute to the late Bernie Wrightson and his work on “Frankenstein,” to the masterful use of the variety of hues in his master copy of Guido Reni’s “Archangel Michael Defeating Satan,” Berndt’s interpretation brought a new life to the 385-year-old painting — Berndt has done what he says he has — grown.

For those interested in seeing the marvelous artwork of Steven Berndt, his exhibit “Growth” will be available for viewing at the Eddie Rhodes Gallery in the Art Building until Feb. 27.