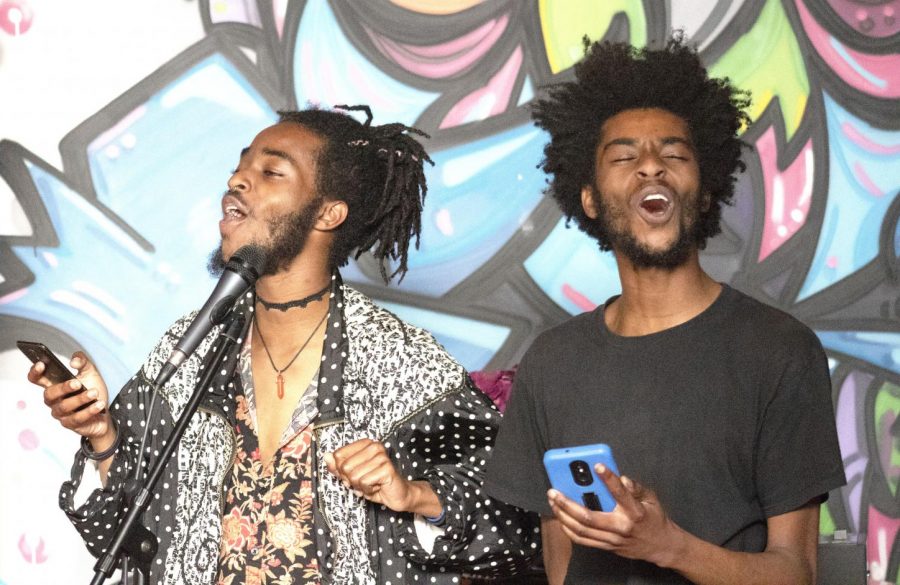 Reggie (left) and Collin (right) Edmonds perform a piece at The RichOak Open Mic, one of the sister shows to the Berkeley Poetry Slam, held at The Starry Plough on Feb. 12.

Berkeley — Wednesday nights are like no other at the Starry Plough Pub, a quaint Irish Pub a few blocks from the Ashby BART Station.

The venue has hosted the Berkeley Poetry Slam since 1998 and has seen its fair share of well-known poets & their contemporaries, however, in recent years the longest running poetry slam on the west coast has come under new and dare I say — bombastic management.

Starting with the venue, the Starry Plough Pub is unlike any of the other dive bars sprinkled throughout the Bay Area.

From the terracotta-colored brick walls, gorgeous bar counter, to the various flags and posters hung throughout the pub, The Starry Plough’s character not only on displays its Irish heritage, but also exhibits their support for the disenfranchised and the working class.

In addition, the pub’s atmosphere glows under the various weekly events scheduled for the community, from the Irish folk dancing night on Mondays, Free Funk Nights on Thursdays, to even including youth singing on weekends throughout the year.

The Plough’s food and drink menu is also something that should not be ignored, with the bar offering a wide selection of beer, wine, ciders and other non-alcoholic beverages.

It also has a smaller, but delicious menu provided by the in-house kitchen.

The drink menu houses common brews such as Modelo and Modelo Negra, Sierra Nevada and Lagunitas. It also makes room for more notable brews such as Pranqster, Smithwicks and Snakebite.

The in-house kitchen, on the other hand, offers classic pub grub such as wings, sandwiches and burgers.

The spot also houses what many call a Megalodon of a meal affectionately called the Plough Burger. It’s a behemoth of a meal stacked with two patties, with extra bacon and cheese, sautéed onions and mushrooms.

The slam itself began around eight o’clock with the host, Javi, another familiar face around the Bay Area poetry scene, introducing himself.

Throughout the night, the ten competing poets vocalized their experiences through poetry, their work ranged from joyful to sorrowful and everything in between. As the first round ended, the scores were calculated to determine the top five poets to qualify for the second round.

The feature of the night, CiCi Jevae, a Richmond native and Poet Laureate. She is an organizer of the Roots Slam, a graduate from both the University of California, Santa Cruz and California College of the Arts with a BA in Sociology and an MFA in writing respectively.

Jevae is also the Media, Arts, & Culture (MAC) Program Manager at the RYSE Center in Richmond. Jevae’s voice echoed through the room, allowing the silence of the audience to be her canvas.

She spoke into the microphone and recited her poetry detailing her physical and emotional experiences through life as Black woman in the United States.

Two of the organizers, Reggie Edmonds and Arvind Nandakumar were also there to take in the competition. Edmonds describes himself as a “23-year-old poet, educator and organizer based in Richmond.” Edmonds, alongside his twin brother Collin, are the founders and organizers of Rich Oak Events among other organizations.

Edmonds is a seasoned veteran of Bay Area poetry and began writing as a student at Richmond High School when the non-profit organization Bay Area Creative, a 501©(3), began teaching spoken word on campus. They are now on their board of directors.

Edmonds describes how they came into organizing as an “accident” as they originally had no interest in running one show, let alone the three they organize now.

They said, after feeling unwelcome at another show and making a mention of how “no one would feel unwelcome as I did, “the idea of creating a space to perform took shape. Edmonds nor their brother took the idea seriously until a few months later when Edmonds’ mentor had reached out to them and made an arrangement to transfer control to what is now the Alchemy Open Mic (originally titled The Alchemy Slam) to the Edmond siblings.

People interested in visiting the Berkeley Slam for a writing workshop or amazing poetry can visit the Starry Plough Pub, located at 3101 Shattuck Ave, Berkeley, CA 94705.