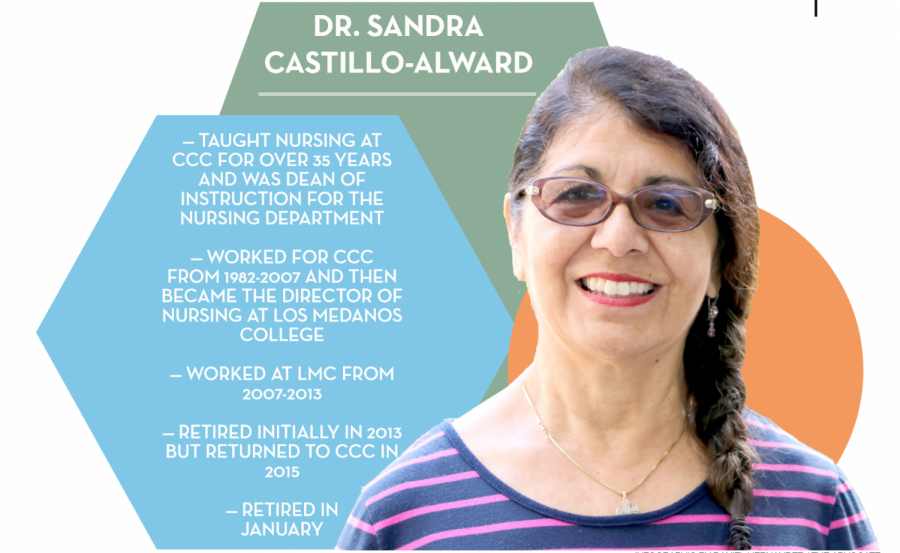 Dr. Sandra Castillo-Alward is one of Contra Costa College’s most treasured professors and has now retired after over 35 years as a nursing professor, program director and friendly face around campus. Dr. Castillo-Alward has retired for the second and final time after cherishing her time here.

Dr. Sandra Castillo-Alward is one of Contra Costa College’s most treasured professors and has now retired after over 35 years as a nursing professor, program director and friendly face around campus. Dr. Castillo-Alward has retired for the second and final time after cherishing her time here.

Before she came to CCC as a professor and later nursing program director, she was a very young registered nurse (RN) who graduated from nursing school when she was 21 years old. Her specialty was medical-surgical patients, working primarily in hospitals, but she decided to start teaching because by 1978, she had four children and wanted to be home for weekends and holidays to be more available to them. “Teaching seemed to be the next natural step,” Dr. Castillo-Alward said.

Funny enough, she found the opening for a teaching job in a newspaper advertisement. She applied for the job, got it and loved it. With teaching, she has enjoyed sharing knowledge with hundreds of students over the years.

When she first started at CCC, she was working in the Licensed Vocational Nursing Program and taught within it until it was terminated in 1986. She then taught in the RN program. Teaching in different programs gave her opportunities to learn and gain new skills.

Castillo-Alward became dean of instruction in nursing before finally becoming the director of the nursing program. She worked at CCC from 1982-2007 and then transferred to Los Medanos College (LMC).

She became the director of the nursing program at LMC from 2007-2013 before retiring for the first time. She was happily retired, living a comfortable life until 2015 when she got a call from Dr. Cheri Etheredge, nursing department chairperson and professor.

Dr. Etheredge told her the current director actually had abruptly left and was wondering if Castillo-Alward would come back to help with the program and work parttime. Castillo-Alward promptly decided to come back and was planning to stay for one semester but continued working part-time until 2017. In January 2017, she became the full-time registered nursing program director and came out of retirement until January 2020.

When she first began working at CCC, she didn’t think she would have such a big impact, but she felt fortunate to get the job and was very passionate about it. Castillo-Alward was glad to have prepared her students enough and is ready for them to carry on her legacy of good and efficient nurses. Even though she’s now retired, she still emails interim nursing department co-chairperson and co-director Angela King-Jones.

Interim nursing department co-chairperson and co-director Jacki Wright worked closely with Castillo-Alward and said she has great expertise in the Board of Registered Nursing regulations. Dr. Etheredge has worked at CCC for 39 years and worked with Castillo-Alward for most of that time. Etheredge was elated when CastilloAlward decided to step in, in 2015, and that’s when the two really started working closely together.

“She (Castillo-Alward) was all about doing what was the best thing for the program. That was always first and foremost in her mind,” Etheredge said. Etheredge looked up to her and said she had one of the strongest work ethics she has ever seen. Etheredge also said it’s very admirable she still keeps up with King-Jones and she does it on her own time.

“I feel very fortunate to have worked with her,” Etheredge said. Dr. Castillo-Alward said, “Having spent a good portion of my life at CCC, I feel very blessed to work with such diverse people and I marvel at how many students have been able to continue their education (helped by) my knowledge and become nurses.”