Cupid’s dinner shows the delicious side of love 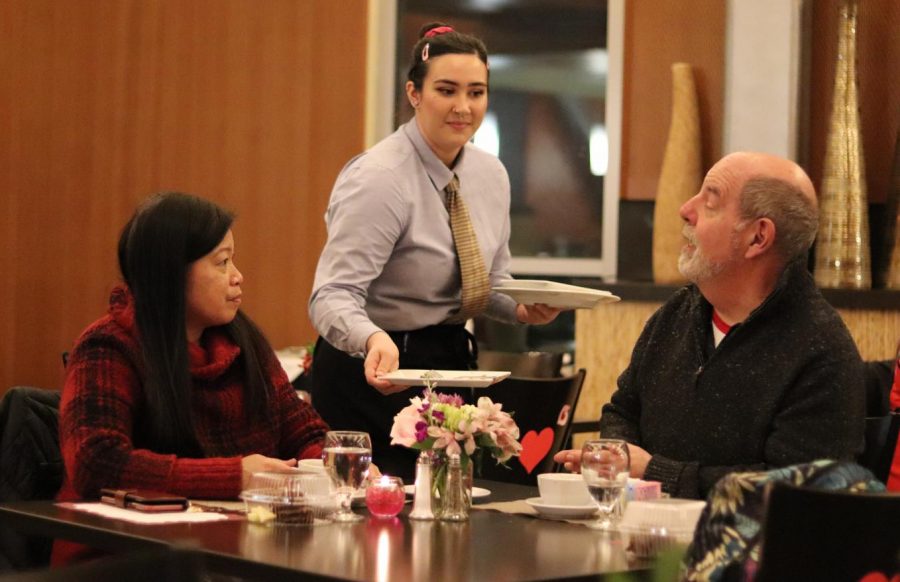 The culinary department held its fifth annual Cupid’s Season Dinner Scholarship Event with the intention of giving students the opportunity to work in a professional restaurant setting while getting to serve their community.

“People have been happy about it because we don’t serve a lot of dinners in the restaurant — it’s mostly lunch,” culinary arts professor Elisabeth Schwarz said. She said the event was probably more affordable for members of the community.

Attendees had to reserve their $40 meal in advance. Upon arriving at their tables, patrons were greeted by an ensemble of waiters who swiftly and gracefully gathered around. The waiters assembled the table arrangements with a candle, place mats, flowers, utensils and menus accordingly to the number of diners.

Two attendees, Madeleine and James Machado agreed that the food was “double amazing” this time. The menu, put together by culinary arts department Chairperson Nader Sharkes, began with the amuse bouche — arugula and crab rangoons with sweet and sour sauce.

Thereafter, scallops seasoned with crushed pepper and a helping of parsnip purée were served as the starter. Next up was the entrée. A plate of braised short rib and medium-well beef tenderloin sat on top of mashed Yukon Gold potatoes and vegetables.

Following was the plate of artisanal cheeses including gouda, cheddar and parmesan with pecans and slices of bread. And finally, the desert round came with a choice of either seven layer chocolate cake or raspberry glazed cheesecake.

“We would go to San Francisco for food like this, but we didn’t since it’s right in our backyard,” attendee Artune Cingoz said. He came to the dinner with Nicole Cruz and they found the event on Facebook and were one of the first to reserve a table.

Cingoz said, “I would say this is better than a professional restaurant. Nice and neat with a very calm atmosphere.” He could hardly tell the wait staff were students due to their professional demeanor.

“Staff were super professional. It’s great to see them on track for their careers,” James Machado said. Culinary arts major and bartender for the event Matthew Gonzales Kelley said the events the department hosts better help him for the professional food industry.

Around two-thirds of the tables were filled with diners. “Every seat in this restaurant should’ve been filled,” Cruz said. Guests gradually arrived which left the wait staff to linger around the bar attentively waiting to serve any table.

In Garcia’s experience being host, she said, “This teaches you how to be more social, how to talk to people and be organized when seating people down. Hosting has been really fun because you get to dress up and be yourself.” Schwarz said the Cupid’s dinner was a success. “I’m really proud we have this beautiful facility and we can work with our students on ideas they wish to explore,” she said.