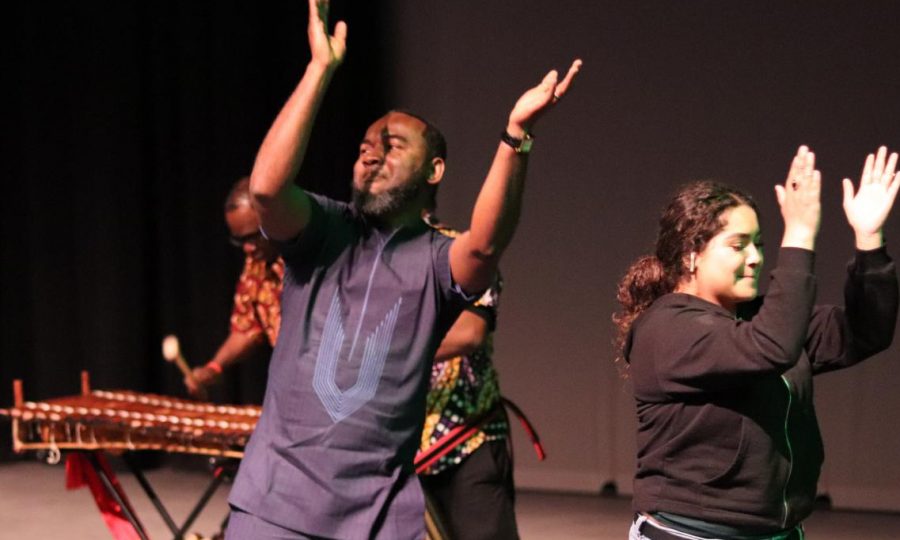 On February 13, 2020, The African American Studies department hosted an African Heritage Month Celebration at the John Jean & Knox Performing Arts Center for an evening of enlighten and entertaining performances.

EOPS/CARE and CalWORKS Manager George Mills, who was in charge of welcoming and introducing guest speakers at the celebration, said it’s a special time for us to come and celebrate the community in its entirety.

Mills has also highlighted other events that are happening during African Heritage Month such as a Movie Screening for Just Mercy at the Century Hilltop 16 Feb. 18 at 6:30 p.m. and a Lecture about the History of African Civilizations by Chair of History, Anthropology, and Geography Department Manu Ampim Feb. 20 at the Richmond Public Library at 6:30 p.m.

There will also be an Essay writing contest on “How Can the Black Vote Influence Local and National Elections” which is due February 24 and Comet comics and poets will be hosted at Fireside Hall from 6-8 p.m. To close the month, a lecture about Vincent Murrell on Black Leadership will be hosted in the General Education Building from 10:00 a.m. to 11:30 on Feb 29.

In February 1926, he first celebrated the black history as “Negro History Week” which was then expanded to Black History Month.

In 1897, he finally entered school as a full-time student after having to support his family.

Finally, in 1912, Woodson received his Ph.D. from Harvard University and became the second African American after W.E.B. Du Bois to receive a doctorate.

After earning his doctorate, Woodson continued to teach in public schools and then joined the faculty at Howard University as a professor in addition to serving there as a Dean of the College of Arts and Sciences.

Film major Brian Wanene presented a student presentation about his life experiences and the History of African Civilization class that he took. Wanene was born in Kenya and he and his family moved to the United States when he was five years old.

Wanene said although he is not an AA Studies major, he chose to take those courses because he felt that it was imperative to understand more about African civilization.

Ampim gave a presentation about The California Connection-From Africa to America and talked about topics such as the Map of Ancient Kush, Kushite Princes, Pyramids of Nurl, Great Pyramid of Giza and the Olmec Civilization.

He said, “The purpose of this event is to celebrate the African culture.”

One of the numbers she performed was a song called “Ghetto to Goddess” and her goal for that song was to inspire the world to rise. She said, “If we don’t stand up for ourselves, who will.” Iminah said her ancestors inspired her to sing.

Chair of African American Studies Department Carolyn Hodge, who did the closing remarks of this event, would normally assign her students to go to the event, take notes on it and document their reaction. If students were unable to attend, they would be required to do an alternate assignment and have it returned to her by the week after the event.

Hodge said she was “happy that the college knows that it’s important for everyone to learn about African culture and experiences.”