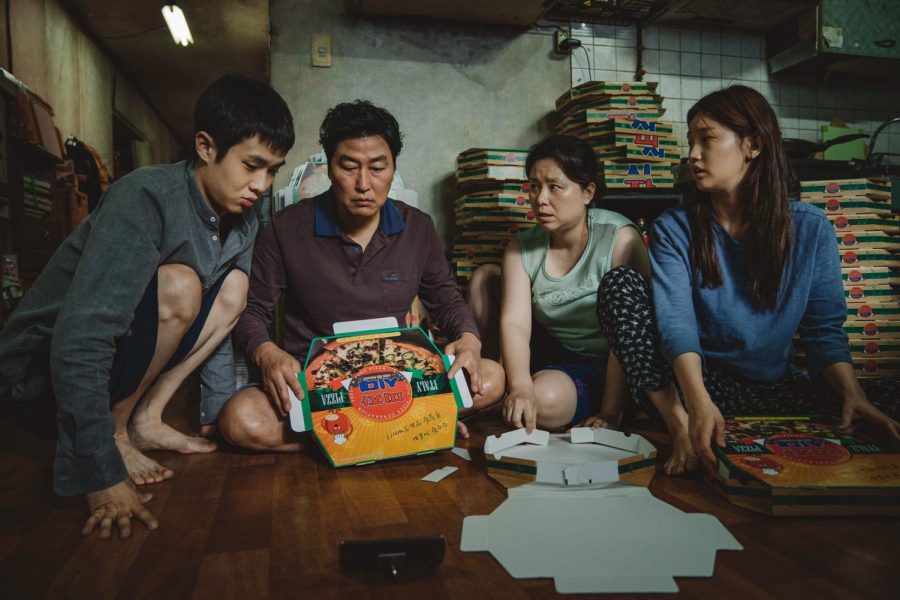 Now that “Parasite” has added a couple Oscars to its name, including Best Picture, it has suddenly become a must-watch film for everybody.

With all the hype comes the creeping feeling that the film can’t possibly be as good as everyone says it is, right?

There have been underwhelming Best Picture winners before.

Well, the hype is justified. “Parasite” is downright incredible.

The opening scene perfectly encapsulates what makes “Parasite” so fun to watch. The Kim family is running around their minuscule basement home trying to find a public Wi-Fi to connect to.

These opening moments show the dire circumstances the Kim family lives in.

Scrounging for Wi-Fi and struggling to get by folding pizza boxes, they are situated in an underclass fighting for survival.

The plot kicks into gear when Kim Ki-woo (Choi Woo-shik) son of the Kim family gets a recommendation from an old classmate to pose as a college student and take his job as a tutor for Park Da-hye (Jeong Ji-so) the teenage daughter in the wealthy Park family.

After a bit of document forgery, he lands an interview with the naive mother of the Park household Chung-sook (Chang Hyae-jin).

After a tense interview he lands the job.

During these first 20-30 minutes of the movie, Bong Joon-ho’s directorial mastery and the stellar acting is on full display. Particularly the effective use of framing to convey emotions accentuate the drama and mood of the scenes.

Additionally, he captures the set-up and payoff formula found in great heist films.

The cluttered tight shots of the Kim’s home life give a sense of claustrophobia that the characters feel as they run over each other to move around their home.

Once Ki-woo enters the Park household, it’s almost a sense of relief as the shots widen in their spacious home.

After Ki-woo is employed, he hatches a plan to get the rest of his family hired by the Park family, first up is his cunning and apathetic sister Kim Ki-jeong (Park So-dam).

“Parasite” takes on its strongest social commentary during this portion of the film from the overarching questions of “who is the real parasite?” It is explained through the commentary of Korean class dynamics that American viewers might not be familiar with.

There are also great relationship dynamics explored using each character. Ki-jeong seems to adapt to the rich life quickly almost seeming like she belongs while her brother Ki-woo struggles with feeling like an outsider in a world teeming with wealth.

Once the plot gets going, there’s no shortage of twists and turns to keep the viewer on their toes. The killer thing about “Parasite” is how it completely plays with expectations.

There are several moments where the viewer starts to think about what will happen next but then the film takes a hard-left turn.

This is exemplified by the reintroduction of the Park family maid Gook Moon-gwang (Lee Jung-eun). After her firing at the hands of the Kim’s scheme, her reintroduction to the film is an unexpected twist in narrative and tone.

The tonal shift in particular is a marvel to watch.

Bong Joo-Ho effortlessly incorporates horror and thriller elements to a film that can almost be considered comedic until that point.

After all the wild twists and meticulously set up scenes, the ending of the film is sobering. It ends on a quiet, beautiful series of scenes that conclude the film in a thought-provoking manner.

“Parasite” is a really good movie and begs to be rewatched several times. Each scene is packed with great moments. “Parasite” is for sure going to be one of those films that comes on HBO in a few years and no matter what point in the movie is up next, there’ll be a scene coming that is too compelling not to sit and watch.