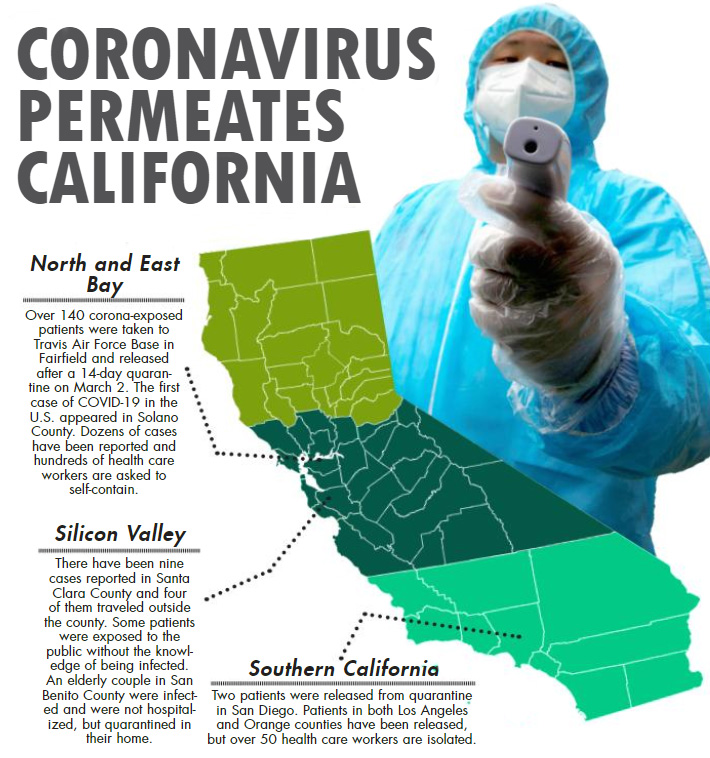 Information that spots that places in California where cases of the novel coronavirus have appeared with information up to date on March 3, 2020. Sourced by the Los Angeles Times.

A new virus is spreading across the globe at such a rapid rate that scientists have hardly had any time to learn about it.

The Coronavirus Disease 2019 (COVID-19) is thought to spread person-to-person and there are a few factors the Centers for Disease Control and Prevention has discovered that play a role in contracting the illness.

They are being in close contact with a carrier — within six feet, the length of time near them, whether they released any respiratory droplets on you and how often you touch your own face.

To help avoid infection, people should follow flu prevention tips such as washing their hands thoroughly for 20 seconds many times a day and avoiding touching their eyes, nose and mouth. They should also be careful touching public surfaces, as a study of other coronaviruses found they survive on metal, glass and plastic for from two hours up to nine days.

While the illness does have a high transmission rate, its mortality rate is low. Researchers from the United Kingdom estimate that between five and 40 coronavirus cases will result in death, with a best guess of nine in 1,000 or about one percent.

The most common symptoms that patients initially show with COVID-19 include fever, dry cough and a shortness of breath. People who believe they may have contracted the illness should call their doctor or local public health department to receive guidance on self-isolation and seeking further treatment. It is important to remember that many of the symptoms are similar to the flu.

This global health crisis has found the United States with a scrambling, yet intensive response. California faces a major shortage of test kits available to diagnose patients with initially only 200 kits for the 8,400 individuals being monitored, California Gov. Gavin Newsom said.

The Governor’s Office also told reporters that most of the state’s stockpile of facemasks has run out leaving only about 20,000 masks for health professionals. Retailers have sold out of N95 respirator masks in recent weeks due to a flurry of public demand because of rising fears and anxieties.

His office has reported that they have made an order of 300,000 masks, but most will be made in China, possibly leaving them on backorder until April due to high demand.

Locally, actions are being taken to help expedite the rate at which cases can be diagnosed. Officials in San Francisco are preparing for the inevitable spread of the disease in the Bay Area.

“As the situation changes rapidly in the Bay Area and on the West Coast, we expect to have confirmed cases in San Francisco and are preparing for community spread of the virus,” Dr. Grant Colfax, San Francisco department of public health director, said to NBC Bay Are.

San Francisco will now be performing its own tests for the coronavirus instead of having to send them out to the CDC in Atlanta.

Local testing results will take one-to-two days instead of waiting four-to-seven days. However, San Francisco only has 250 test kits which limits availability to people who may have been exposed.

“It’s not a matter of if, but when. The health department will prioritize protecting the populations that are most vulnerable to becoming very sick or dying if they get COVID-19. That includes the elderly and people with chronic diseases and underlying health conditions,” Colfax said.

Contra Costa County Health Services announced two weeks ago that they are treating three patients who were recent evacuees from the quarantined Diamond Princess cruise ship anchored in Japan, due to a lack of space of facilities closer to Travis Air Force Base.

In the second case to be confirmed positive in local counties, an individual in Sonoma County contracted the virus while on a cruise that departed from San Francisco to Mexico. This has prompted the city to declare a local emergency as they were in public for 10 days beforehand.

Companies around the Bay Area are giving employees the option to work from home.