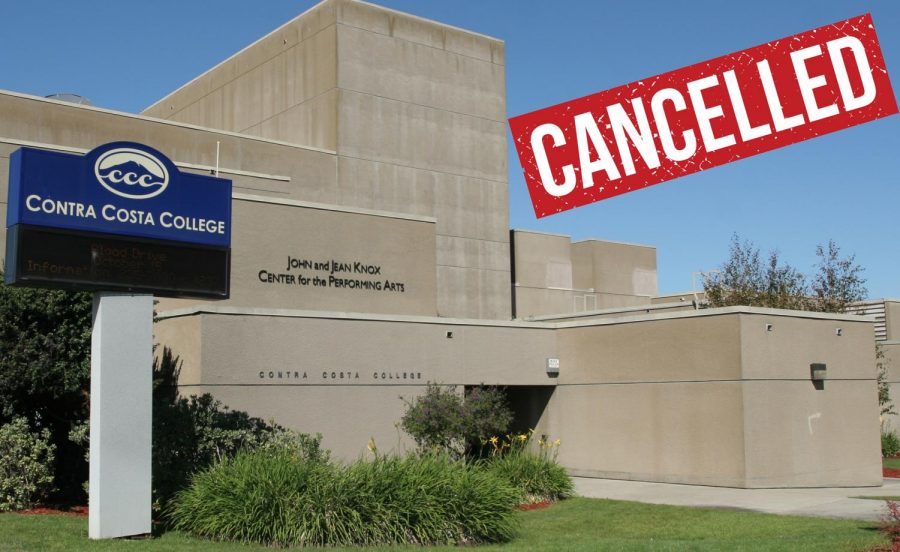 Knox Center events for the spring 2020 semester have been cancelled due to Coronavirus concerns.

Due to the closure of the Contra Costa College as a part of the statewide effort to limit the exponential spread of COVID-19, the drama department canceled its spring productions “We Won’t Pay, We Won’t Pay” and “The House of Bernarda Alba.”

The now shelved performance of “We Won’t Pay” was supposed to open the weekend of March 20, while actors and crew for “The House of Bernarda Alba” were supposed to begin rehearsals for the play on March 23.

According to drama department Chairperson Carlos-Manuel Chavarria, prior to the final cancellations, the plan was to move forward with a recorded, empty Knox Center performance of “We Won’t Pay” on March 20.

The same was slated to happen with “The House of Bernarda Alba” late this month.

The spring cancellations are going to be a steep fiscal hit for the drama department due to the significant financial losses, Chavarria said.

“We have a huge loss within the department, including performance rights, director’s pay, lighting designer’s pay, sound designer’s pay, costume designer’s pay and marketing designs,” he said. “Also, printing, delivery, props that were bought and not used and set construction workers’ pay. On top of that, all the people and students who were getting some sort of pay for working in the shows,” Chavarria said.

For “The House of Bernarda Alba,” which was supposed to open on April 24, there were plans for the performance to be postponed. Director Angelina LaBarre was working on cutting the script to make it more streamlined due to the truncated rehearsal schedule.

However, with the performance being canceled, there’s understandably a sense of disappointment.

LaBarre said, “It’s disappointing because I’ve been wanting to do this production for quite a while. I even gave myself the difficult task of creating a new adaptation of Lorca’s play by weaving together three different translations of it. I know this is the best for everyone though. We have to protect everyone right now, and that’s more important than a play.”

In addition to the spring productions being canceled, the drama department is faced with the difficult task of teaching acting classes online.

For the performance-based Acting 1 and 2 classes that LaBarre teaches, she’s tackling the challenge of creating an engaging class remotely with the help of the broader California theater teaching community. The group has come together to help one another.

“The theater educators in California and across the country have all come together over social media,” she said. “We’re all sharing ideas and resources. It’s been very heartwarming. We’re going to continue to focus on performance through video conferencing and spend time focusing on character development and analyzing a script for performance,” she said.

“Acting 2 will be focusing a lot on the business side of acting. They’ll learn how to self-tape for an audition, build a resumé and all those little tips and tricks that we don’t have time to cover in class,” LaBarre said.

Chavarria made it a point to outline the distinction between online teaching and remote instruction, which many professors are currently navigating.

For Chavarria, the sudden shift to remote instruction is creating a lot of variables for students and teachers in order to create an environment for students to succeed in a rapidly-changing learning environment.

Chavarria said he’s aware of the challenges his students who are more comfortable with a face-to-face learning environment face and has already made changes to his curriculum to help them succeed.

“In general, online teaching is far more challenging than face-to-face,” he said. “You spend more time preparing classes and figuring out all the different challenges you may encounter. You also have to think about having ‘alternative’ assignments in case your main assignment does not work for some reason or another.

“You cannot present a lecture longer than 20 minutes, or you could but students won’t be listening after say, 10 minutes anyway, so we have to get creative. You always have to be aware that students may need help and the only way to help them is through email communication — so yes, I get email 24 hours a day.”

The drama department getting rocked by the COVID-19 is representative of the national theater community, which is currently dealing with performance cancellations, lost jobs and theaters suffering crippling financial challenges.

LaBarre, who has 18 years of experience as a professional actor and director, has never experienced something like this. However, she’s encouraged by how the theater community is handling these difficult circumstances.

She said, “Social media has blown up with solidarity within the community. Broadway stars started a trend for high school and college students to record themselves singing, dancing or acting pieces from their canceled productions.

“The New Play Exchange has tons of new reviews as people are reading the new plays, people are live-streaming video conference play readings and publishing companies are giving free streaming rights, so they can still perform the show for a digital audience,” LaBarre said.

“It sucks, financially, for everyone who pays their bills in an industry that requires live audiences, but it’s been really awesome to see people come together.”