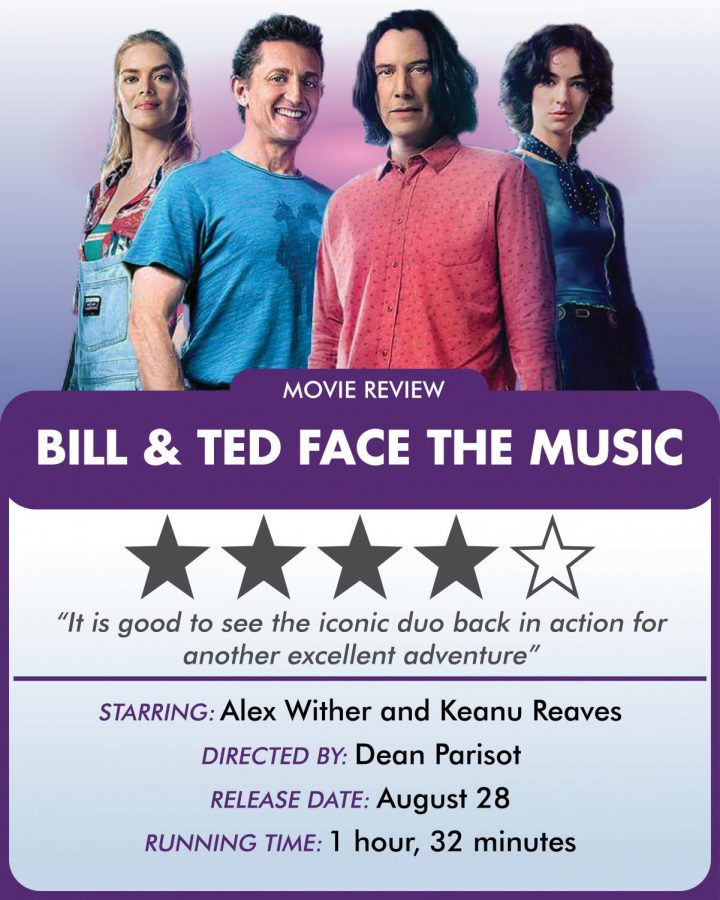 “Bill & Ted Face the Music” made its way to select theaters and streaming sites Aug. 28, with a production budget of $25 million.

“Bill & Ted Face the Music” made its way to select theaters and streaming sites Aug. 28. Although the two have been out of commission for the last three decades, the team proved “The Wyld Stallyns” have the gravitas to span generations.

The film is set thirty years after our introduction to the rocking duo in “Bill and Ted’s Excellent Adventure”, in which the team played the song they believed would save humanity.

This time, after a governing council from the future warns the duo about the end of existence, the two must again race against the clock to create the ultimate song and rescue the universe from certain destruction.

Even with a hefty production budget of $25 million for the franchise’s most recent production, my major concern going into the movie was the fact that Alex Winter (William “Bill” Preston) and Keanu Reeves (Theodore “Ted” Logan) are much older than they were during the film’s first installment in 1989.

As characters, Bill and Ted are notorious for having childish personalities and I was worried that a 30-year break between films would ruin their legacy.

However, I was pleasantly surprised that the two held onto their dimwitted nature – while still being believable as older adults.

This film also introduces some new characters: Bill and Ted’s daughters (Thea and Billie, respectively), both of whom have prevalent roles within the story.

While their fathers travel to the future to find their future selves and learn the song that will thwart impending doom, Thea and Billie must go back in time to gather famous musicians to create a band prophesied to aid Bill and Ted’s band “The Wyld Stallyns”.

The daughters, played by Samara Weaving and Bridgette Lundy-Paine, do great impressions of their dads.

Luckily, since the two have their own separate adventure, it does not feel like they are carbon copies of Bill and Ted. Instead, their introduction served as a way to get a little Bill and Ted in every scene.

The movie is filled with references to the duo’s last two adventures. As someone who has seen both Bill and Ted films many times before, it was important that director Dean Parisot did not ignore the source material.

It was nice to see the special effects used throughout the movie had the same spirit as the films before it, with a 1990s feel; minus the rough special effects.

Usually I’m OK with shorter films (“Face the Music” is about 90 minutes), but this film could have been longer. The story is well done and interesting, but it feels like so much happens in a short amount of time, making certain elements feel rushed. That pace leads to every conflict being easily resolved.

In one scene, a character is mad at the pair because they did not like his style of music. But after a two-minute conversation with the daughters, everything is resolved.

This hurts the film because every time there is a bump in the road it is just quickly brushed aside and the story continues without a hiccup.

It feels like a lot of these clashes either should have been explored further or just left out altogether.

Even though the story is a bit short, it is good to see the iconic duo back in action for another most excellent adventure.