Governing body fails to display leadership after years of turmoil 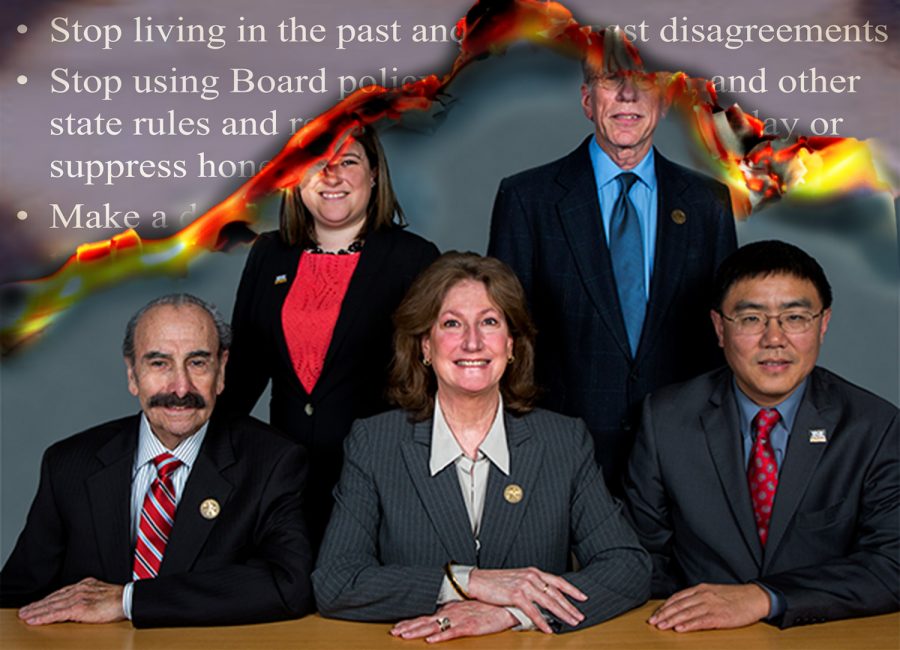 During the Aug. 8 special Governing Board meeting, Dr. Harris shared that the board’s self-evaluation indicated it is facing a crisis.

Findings from its 2019-20 self-evaluation showed the Governing Board of the Contra Costa Community College District (4CD) is often dysfunctional and unwilling to work as a unit.
The Administrative Procedure 1015.01 states that in May of each year the Chancellor’s Office will distribute an evaluation form to all trustees based on criteria developed the previous year. The form shall also include open-ended questions to gather data on accomplishments, strengths, areas for improvement and suggested priorities for the coming year.

The procedure also states the district board will appoint an external evaluator to assist with the evaluation, in consultation with the chancellor and board chair.
Collaborative Brain Trust Consultant Brice Harris was appointed to assist with the self-evaluation.
During the Aug. 8 special Governing Board meeting, Dr. Harris shared that the board’s self-evaluation indicated it is facing a crisis.
The results from that self-evaluation found the board is often dysfunctional and unwilling to make decisions and take action.
The evaluation also showed there is a clear split among district board trustees, resulting in the increasing frustration of each member. According to the evaluation, trustees do not trust one another and are often unwilling to work together.
Another point of contention is the upcoming November board elections. They have caused greater division on the board.
Harris’s findings found the Governing Board had a controversial previous year (2018-19) and is now experiencing new challenges, such as the chancellor’s retirement, the COVID-19 pandemic, reduced revenue and national unrest.
During his review of the board’s self-evaluation, Harris said, “In order to improve, the Governing Board must stop living in the past and forget past disagreements – stop using Governing Board policy, the Brown Act and other state rules and regulations as weapons to delay or suppress honest Governing Board discussion.
“Stop seeking advice on improved Governing Board performance and then ignoring the advice given,” he said.
Trustee Vicki Gordon said the board’s deterioration mostly reflects on the (new board) president and the (interim) chancellor.
“A year ago, when I was president and Fred Wood was chancellor, we did not have this kind of dysfunction,” Gordon said. “Now that we have a new board president and an (interim) chancellor, the district board has been dysfunctional.”
Governing Board President Rebecca Barrett said it is disingenuous of a trustee to pass the blame to her when board dysfunction is the result of ethics violations committed prior to her presidency.
“I believe it is the duty of the (Governing Board) president to sunlight clear ethics violations. It is not my job to cover for my fellow board members,” Barrett said. “That may not earn me friends on the board, but it is what my constituents expect of their representative.
“I would hope all board members would be willing to admit their mistakes, apologize and move on to focus on serving students,” Barrett added.
Board Vice President Andy Li said it is necessary for the board to improve its internal relations.
Harris also compared the self-evaluation results to the Governing Board’s self-evaluation of last year and noted a decline in areas where there was cooperation among trustees.
Board member John Marquez said during this year’s self-evaluation, every member of the district board rated the performance of their work in the Governing Board.
“We based our own rating on what we feel,” Marquez said. “Some of us might rate ourselves low, and some of us might have rated ourselves higher than before. That’s why it’s a self-evaluation.”
Governing Board Trustee Greg Enholm said he is not surprised by the disagreements between members of the board because of the lack of experience of board members Barrett and Li.
“I have been on the district board for 10 years. Trustee Gordon was on the Martinez Unified School District board and trustee Marquez was on the Richmond City Council,” Enholm said.
“(Trustees Barrett and Li) have never been elected officials before. Their only elected experience is their last two years on the board. So, it is not surprising that there would be some issues,” he said.
Vice Chancellor Gene Huff said everyone is entitled to their own opinion – however, the members of the public will ultimately point out the cause of such dysfunction.
Faculty and constituent group leaders are concerned about the ramifications of the Governing Board’s divide amid the accreditation process at district colleges.
Barrett said losing accreditation will be catastrophic for students, and the board must find a solution to fix its issues.
“I do think the only way we get better as a board is if we actually start talking about some of our personality clashes, own it, then commit publicly to being better and moving forward,” she said.
Classified Union President Neal Skapura said the district needs to focus on how the board’s behavior is affecting the institution.
“Having self-serving, short-sighted vindictive officials is disappointing. We need to vote on that,” Skapura said. “(Gordon and Enholm) are up for election, and we can fix the situation by voting them out.”
Former student trustee Shreejal Luitel said the Governing Board’s dysfunction will affect many students in the years to come.
“Folks on the board are more concerned about politics than students,” Luitel said. “We need a change in leadership.”​