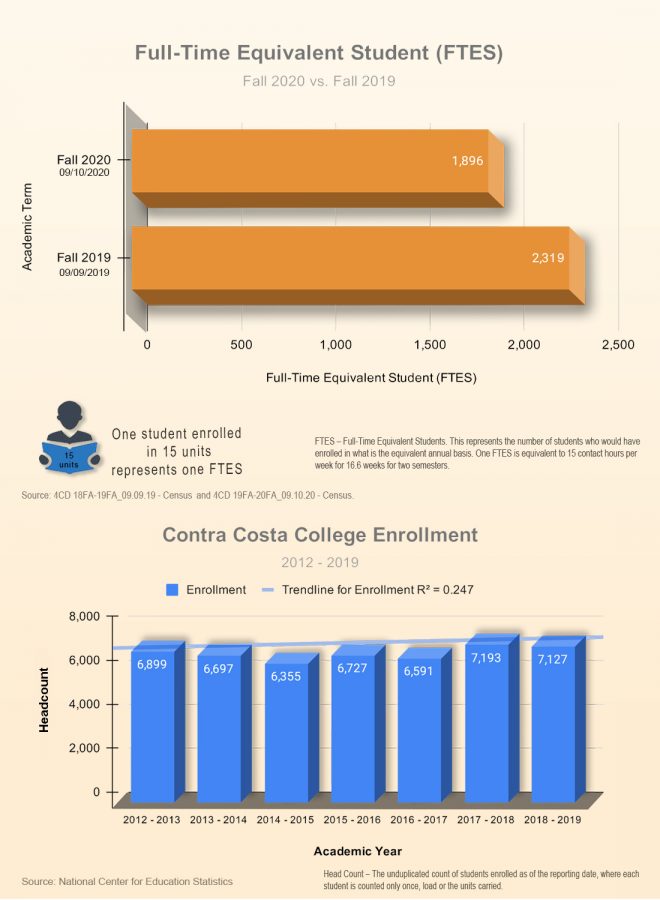 Enrollment at Contra Costa College has suffered a significant drop as well as a decrease in the number of classes during the 2020 fall semester.

As of Sept. 10, the current enrollment figure is 1,896 full-time students, which is an 18.6 percent decrease from fall semester of last year. The number of classes fell 7.6 percent, which is a loss of 53 sections.

According to CCC administration, the sharp declines are likely due to the COVID-19 pandemic, which forced classes to move online in the middle of the 2020 spring semester.

“We are seeing an increased prevalence of COVID-19 in West County combined with rapid change of moving to a remote learning environment,” Dean of enrollment Rodolfo Santos said. “With an increase in income loss, and loss of jobs, it is possible that many in our community are experiencing difficulty in acquiring technology to adapt to the new remote learning environment.”

Santos said CCC is actively looking into ways to offer technological resources to students. One way they have achieved this is offering free internet and loaning Chromebooks to students who need them.

Loss of income and adapting to remote learning are not the only problems students have had to face.

A study conducted by the Student Senate for California Community Colleges found that other challenges faced due to the pandemic were higher levels of anxiety, stress, depression and mental health concerns.

“There have been several challenging fronts for students, and mental health is one of the top ones,” Dean of students Dennis Franco said.

Although many people are uncertain of the future during these times, some are staying optimistic.

Professor and counselor Kelley Cadungug said he finds this semester to be “much more positive” than spring semester.

“By no means is it perfect, but I definitely saw the peak of complaints come during the spring semester,” Cadungug said. “In some cases, now that every GE class or major prep course they need is online, students are saying they are actually loving it.”

According to Cadungug, the abruptness of moving online during spring caused a lot of confusion and frustration, but fall semester is a lot smoother so far.

“I feel like a lot of the preparation that we did over the summer alleviated some of the initial barriers that some students faced,” he said.

“I’ve had these lectures and lesson plans for the past decade,” Cadungug said. “Every moment of free time I had was spent adapting these classes because there are certain parts of a face-to-face lecture that do not translate to online.”

He went on to say he respects his fellow colleagues for moving online because of how much work it has been.

Cadungug has also had less counseling appointments, which gives him “the sense of positivity,” he said.

“Normally I’m booked two-to-three weeks in advance,” he said. “But this semester we’re not as full because less people are coming in.”

However, even with the efforts made to help students with remote learning, the significantly lower enrollment numbers are unheard of.

“During periods of economic recession, the historical trend has been that more people go to school,” Santos said. “What we are facing is different and unprecedented in our lifetimes. COVID-19 has created economic and public health factors that have affected people’s choices to go to school.”