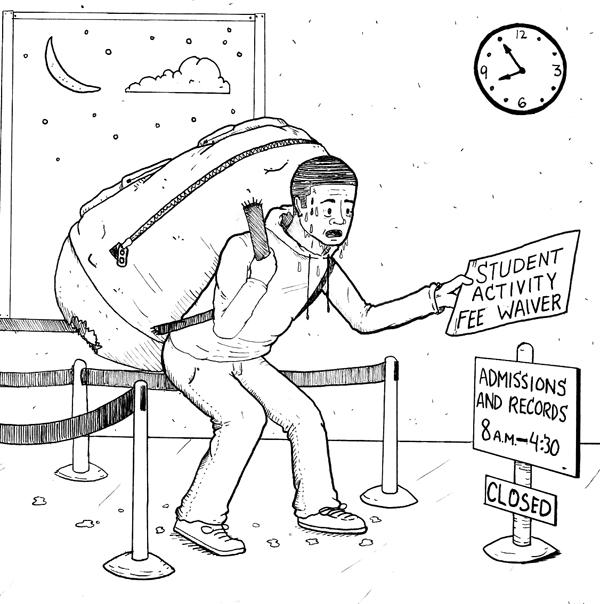 Students at Contra Costa College do not have an effective means of waiving the $5 student activity fee they are charged each term, a fee of which they are hardly informed. The fee has been in place since spring 2012.

In a legal opinion released by the California Community College State Chancellor’s Office, the opinion of the chancellor states, “When optional fees are not properly described, the appearance is that the district may be charging an impermissible mandatory fee.” The opinion also states that the method of waiving the fee cannot be “unduly burdensome.”

This is the case in the Contra Costa Community College District. Students are currently asked to hunt down paperwork, fill it out and then stand in the long lines outside the Cashier’s Office in order to waive the fee. They can only do this during the registration period, when many students are attempting to finalize their class schedules and are not worried about paying for school yet.

The Cashier’s Office also has no evening hours, making it even more difficult for working students to waive the fee.
The current nature of the student activity fee may be illegal, despite the fact that it does not have to be. The people who instituted the fee have never read the chancellor’s legal advice on the fee, by their own admission. In light of this, it should be no surprise that the fee has been implemented illegally.

A “negative check-off method,” where students are simply asked, “Would you like to pay $5 to support student activities at your campus?” while registering for classes would solve almost all of the legal issues surrounding the student activity fee, but multiple members of the district Governing Board have said they will not address the issue until students have brought the issue to the board.

Students across the district should take note of that fact on Nov. 4 when filling out their ballots for the various ward positions up for election.

Students should also bring the issue to the board. The Associated Students Union at CCC is looking for ways to better engage students in regards to the student activity fee, and how to better inform them about what the fee does.

Approaching the Governing Board and demanding a fair system of charging fees be implemented would accomplish all of that. Students would be informed about the fee, their freedom to waive the fee would be preserved and students who wish to take that knowledge and approach the ASU with it will be informed enough to do so. The ASU has an opportunity to take a stance for integrity.