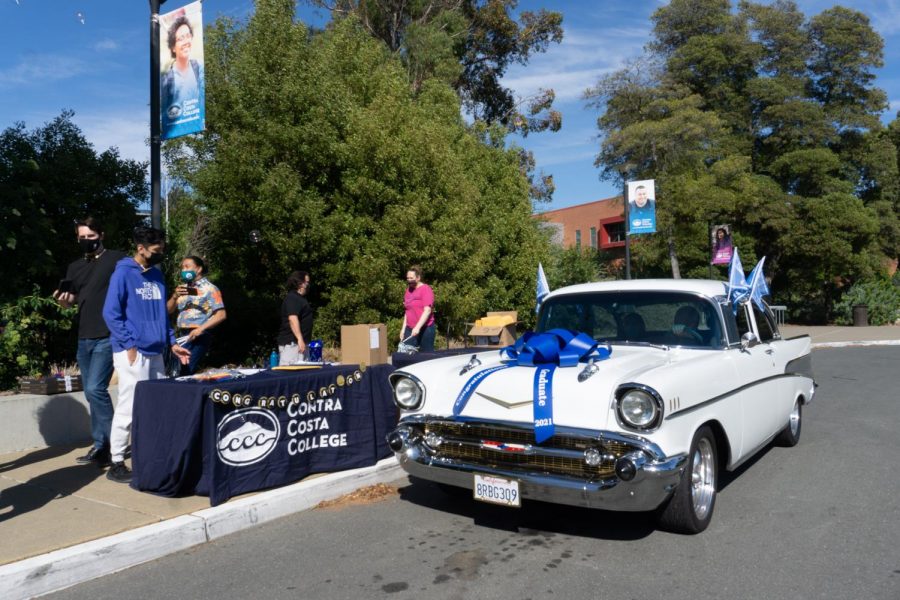 For the second year in a row, Contra Costa College will celebrate the accomplishments of its decorated students with a virtual graduation ceremony.

Links to, and information about, the ceremony can be found at contracosta.edu [link will add when published] and will be hosted on numerous live streaming platforms, such as YouTube Premier. The event takes place Friday evening, with the pre-show starting at 4 p.m. and graduation beginning at 6 p.m.

The project has been in the works since the beginning of the semester and has been thoughtfully pieced together with the large effort of college administrators, marketing coordinators and outside vendors.

“It’s the best day of the year,” Administrative Assistant Elizabeth Bremner said. “It’s the day we celebrate our students and the accomplishments of our students who are the reason we go to work here.”

This ceremony will be the fifth time she has worked on while at CCC. She has been communicating with vendors and students getting the graduation put together this year.

Bremner volunteered to take on several integral roles in the project, including reviewing the graduation slides and ensuring that resources are getting out to graduates.

Larry Womack, CCC director of marketing, he has been working closely with Bremner and Admissions and Records to thoroughly organize the event.

“Traditionally, the Dean of Students Office has handled graduation,” Womack said. “But because it’s been virtual it’s been more of a media event, so marketing has come in to help out.”

He has taken the creative lead of the team, which has led him to build onto the success of last year’s virtual graduation ceremony.

Womack found the positive reception of the previous ceremony to be a good indicator for the potential of this year’s event.

One of his roles on this project has been reaching out to guest speakers to talk during the pre-show, hinting that there will be surprises throughout the presentation — some including celebrities and politicians.

He said he has been working on getting the pre-show together, which included him filming skits with Bremner and Dean of Students Dennis Franco, and reviewing almost 200 video messages that students and families were able to send in.

Several events were organized in leading up to graduation. When the graduation website went live in April, it featured a list of information regarding events and graduation presentation details.

One of the first events was students getting their graduation portraits taken. In April, students were able to make photo appointments though GradImages.

On April 29 and 30, a photo booth was put together by drama professor Courtney Johnson in the theater of the Knox Center for professional photos to be taken. Speeches given by speakers like Interim College President Damon Bell and Associated Student Union President Richardo Sanchez were also filmed by Technology Systems Coordinator Mark Williams in the same space. Their orations will be shown during the graduation ceremony.

Through an agreement between GradImages and Bremner, the college was able to secure free photoshoots for students. Students had the option of paying for their photos, but through the agreement, the high-quality images can be used on their graduation slide for free.

Students were also given the opportunity to customize their graduation slides through a link that was sent to their InSite email. The college teamed up with Envision to allow students to personalize the slides by submitting their own photo, adding in a quote and verifying the enunciation of their names.

On May 6, the college organized a drive-through event on campus where graduates could decorate their cars and pick up “grad packs.” These packets included a diploma cover, the graduation program and tassels. The grad packs were put together and distributed by Bremner and the team at the drop-off center. Tables were set up along the sidewalk, and each time a student drove up, they were met with excited staff that were cheering them on, waving streamers and blowing bubbles.

Despite the constraints already caused pandemic-related restrictions, the graduation team has worked tirelessly to have a memorable ceremony. There have been only but a few challenges that they have come across.

“The biggest challenge is that we are in a remote environment and it’s hard to generate the same kind of enthusiasm,” Bremner said. Staffing is “very lean,” she said, and stretching the work that needs to be done in a timely manner between a small group of people that covers over 700 graduates is a big feat.

Trying to reach students and getting them to engage with their graduation portal was one of the main challenges that Womack and Bremner mentioned. Some students may not check their InSite email and miss out on the event opportunities, may forget to pick up a grad pack or did not show up to their graduation photo appointment.

Another challenge was getting everything together for the presentation in just a few weeks time. Womack and other team members are finalizing the pre-show and graduation a few days before the event, making sure that the presentations are suitable to be broadcast live.

There will be a total of 729 students graduating from CCC Friday. There are to be six student veterans graduating, and 36 Gateway To College students, 13 of those with honors. Numbers for Middle College High School graduates were not available.

“Graduation is the day where we celebrate our students and acknowledge them. And I want them all to know we miss them so much,” Bremner said.