Missing key players and having to regain their form after over two weeks without playing, the men’s basketball team would not be denied 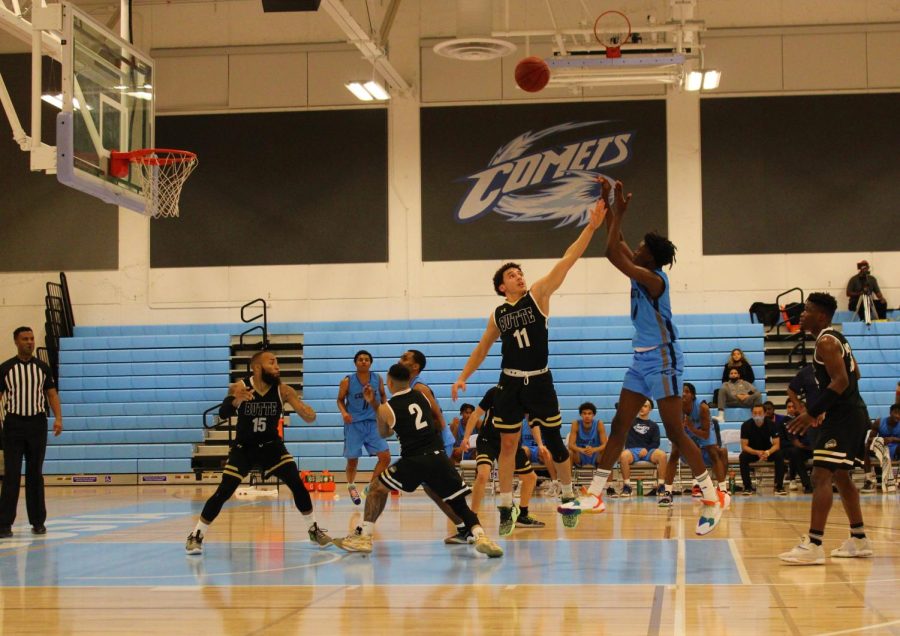 The Comets men’s basketball team got the better of Butte College in San Pablo on Tuesday night after a long sixteen-day stretch without playing a game.

After their victory against Gavilan College on Nov. 21 in the San Mateo Tournament, the Comets had to wait almost three weeks to play again and had exactly three weeks between their last two home games.

“We had a long break so it’s good to come back and win at home”, said Comets’ freshman forward Donovan Sanor.

To start the game, the Comets were sluggish, and the Butte College squad was hot on offense as they built a nine-point lead.

”We had sixteen days off, and it showed”, said Comets’ head coach Miguel Johnson.

Johnson noted that the schedule discrepancy was due to two schools having to reschedule games against the Comets, and they just happened to be back-to-back.

Adding to the adversity the Comets ultimately overcame was playing without two of their starting forwards. Freshman forward Broderick Payne missed the game due to injury and freshman forward Yasin Willock was sitting out on account of being on the COVID-19 reserve list.

Throughout the first half, the Comets used sound fundamentals coupled with solid rebounding to weather the storm.

By halftime, Butte College had a lead of only one point, at 46-45. The Comets still weren’t satisfied.

“We played bad in the first half, that was not us,” said Sanor.

Also in the first half, sophomore forward John Wade ll had an impressive transition dunk, along with a thundering put back slam on a rebound. Wade ll finished the game as the Comets’ leading scorer and rebounder, racking up 24 points and six rebounds, with three steals and three blocks.

Similarly to the Comets’ last home game against Cabrillo College, the team came out in the second half much more aggressive and assertive. Unlike the last home game, though, both teams’ benches were relatively calm and collected throughout.

“I’m glad we came out in the second half and showed our true colors a little bit,” Sanor said.

About midway through the second half, freshman guard Jakarri Lindsey gave the Comets a timely, big boost off the bench. Lindsey ended up with thirteen points and five rebounds for the game.

Willoughby himself chipped in with 15 points and eight assists, to go with freshman guard Myles Lewis accumulating his exact season average in points with 17 and adding seven assists as well.

With roughly five minutes left in the game, the Comets were able to pull ahead by nine points and never looked back.

“Once we were able to pick up the tempo a little bit it was more in our favor,” said Johnson.

Using a 50-37 scoring run in the second half, combined with the team shooting over 43 percent from three-point range for the game, the Comets were able to display their character on the way to a 95-83 victory.

“We showed our toughness and our grit and hopefully sent a message to ourselves that when we lock in nobody can mess with us,” said Sanor.

The Comets now sit in second place of the Bay Valley Conference standings with an overall record of 6-1, behind only undefeated Los Medanos College.

Retired NBA legend and Bay area native Gary Payton was in attendance to watch the Comets’ victory. Payton was at the Contra Costa College basketball gym to scout players that he intends to offer a scholarship to at Lincoln University in Oakland, where he is currently the head coach.

This upcoming Saturday at 1p.m. in San Pablo, the Comets look to stay unbeaten at home and win their third straight game as they take on Sacramento City College, who they defeated by 10 points earlier this season.