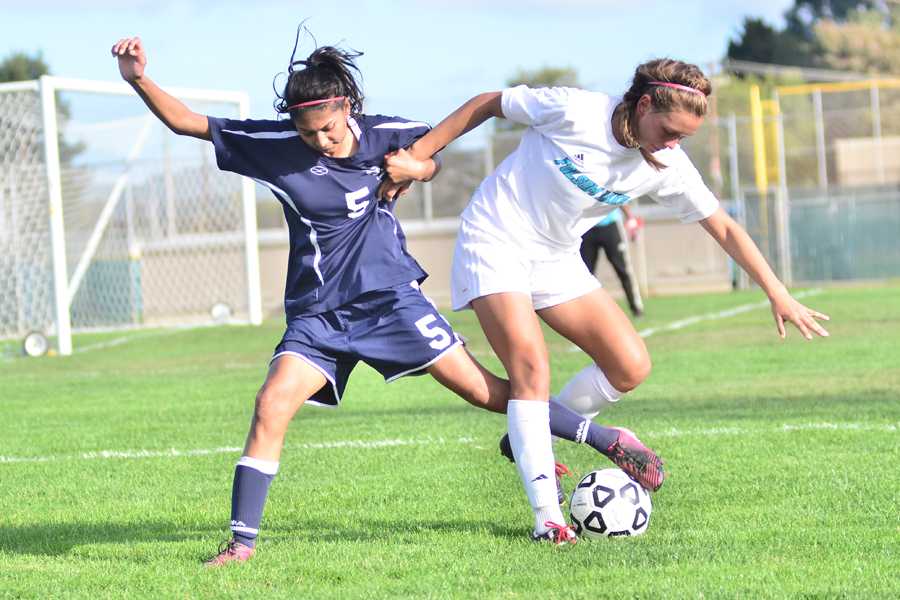 Coach Amanda Beckenhauer took a more hands-on approach to prepare her goalie for the Comets’ second unsuccessful crack at taking out Folsom Lake College’s (13-3 overall, 8-0 in the Bay Valley Conference) women’s soccer team, dropping another contest to the Falcons, 7-0, Friday at the Soccer Field.

Contra Costa College (1-14 overall, 1-7 in the BVC) was pulverized 11-0 in the first meeting after traveling to Folsom short-handed in the squad’s first night game of the season.
It was clear from the opening whistle that the result of the previous meeting shaped both teams’ expectations of what should happen in this contest.

“We know how they play,” CCC defender Mary Salazar said. “We were more confident today because we are more comfortable with each other.”

The Falcons came in prepared for a run-away victory, with attitudes that resembled more of an exhibition rather than a BVC contest. The Comets and their quiet resilience were determined not to let the score get as one-sided as it had before.

Offside calls were a problem early as the overly aggressive Falcons forced the action, looking to put points on the board.

CCC’s defense hunkered down after a quick goal at 80 seconds in, and split the time of possession early in the game. A mental lapse in the ninth minute let a streaking FLC forward Sami Thomas behind the defense for the second goal of the game.

But the home squad jumped right back into the action. An impressive steal by Salazar made way for the Comets first shot on goal of the day. Twenty-two minutes in the Falcons set up a give-and-go for a scoring attempt that was saved by CCC goalie Taheerah Brewer. On the following offensive possession FLC converted a similar set piece for the third goal of the game.

“It’s a different environment playing here,” FLC coach Donny Ribaudo said. “The field is grass and a little smaller. They (CCC) played hard throughout the game, and they’ve improved from the start of the season.”
Another long goal by the Falcons extended the scoring gap to 4-0.

The defensive effort to end the half was inspired by the play of CCC defender Nicole Galvan. On multiple occasions she put her body on the line in an effort to not let the game get any more out of hand.

A free kick for pushing and a goal just before the final whistle set the final score at 7-0.