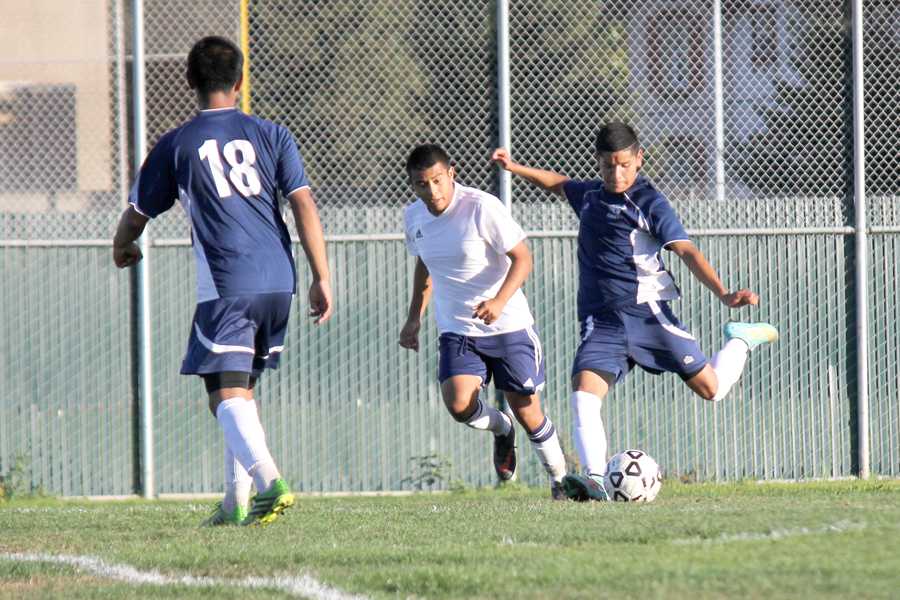 Comet midfielder Jesus Villagrana takes a shot from 30 yards out during CCC’s 3-0 win over Yuba College at the Soccer Field on Oct. 21.

The geese almost instinctively cleared the Soccer Field minutes before play began, as if it were a forgone conclusion that shots would be sprayed from all corners of the field.

Offense was on display as the Yuba College 49ers (1-10 overall, 0-6 in the Bay Valley Conference) made the trek south from Marysville, losing to the Comets 3-0 Oct. 21 in San Pablo.

CCC opened by working the ball up the sideline to center Jesus Villagrana who found center Bryan Santos for a poorly-defended goal on the goalie’s left side.

“We wanted to set the tempo early,” Comet defender Brad Alman said. “We knew we were better than they were. We wanted to get the shutout.”

Alman set the tempo going forward, heading an Alejandro Gonzalez corner kick into the net with 36 minutes remaining in the half.

At the break, CCC was halfway to its shutout leading 2-0.

The Comets returned from the break looking to put the game away early. They failed to convert a good look from the right side, three corner kicks, and a Bryan Vega shot that almost dented the goal post.
“We had good possessions, but we didn’t play with a high level of urgency,” CCC coach Nikki Ferguson said.

The defensive wall of Mendoza, Alman and Nicolas Bob, sensing the shutout was within reach, began to creep into the offensive third.

Alman sprang into action, leaping to intercept a long clear-out pass. Eluding several defenders, he passed to Villagrana, zigged away, then zagged in, to receive an entry pass.
In the midst of Yuba defenders he shot from 10 yards out, past the 49er goalie for his second score, and the third and final of the game.

After the game, the Comet players were aware they let a statement moment get away. Although they achieved a shutout, the mood was a little more subdued than after previous victories.

“There are some games you’re supposed to dominate,” Ferguson said. “We didn’t dominate like we should have.”
The Comets next shot at domination comes on Friday against Napa Valley College.

The 49ers played into the hands of Contra Costa College (8-5-1 overall, 5-2 in the BVC) by attempting to out-finesse CCC by focusing on passing and ball handling to work the ball upfield.

The Comet defensive third thwarted any early attempts to score on goalie Jose Ayala. CCC forwards poked and prodded the 49er defense in an effort to find its weakest link, and minutes in, went on the attack.

“We saw big openings in their defense,” Comet defender Charlie Mendoza said. “When we see openings we connect passes and find the corners — then get the ball inside.”

Comet forward Kevin Navas took advantage of Yuba’s lack of physicality, stealing the ball from 49er wingers at will. The bulk of the visitors’ early frustrations were directed at CCC right-winger Rafael Torres.

The use of his size and footwork earned two early shots on goal. His efforts also irritated Yuba players enough to get them out of their game. Some even turned to pushing each other and complaining to referees.

At 27 minutes, Yuba adjusted its lineup choosing to take a more physical approach.
The adjustment proved to be unsuccessful as the Comets eventually exited the field with their second straight BVC victory.