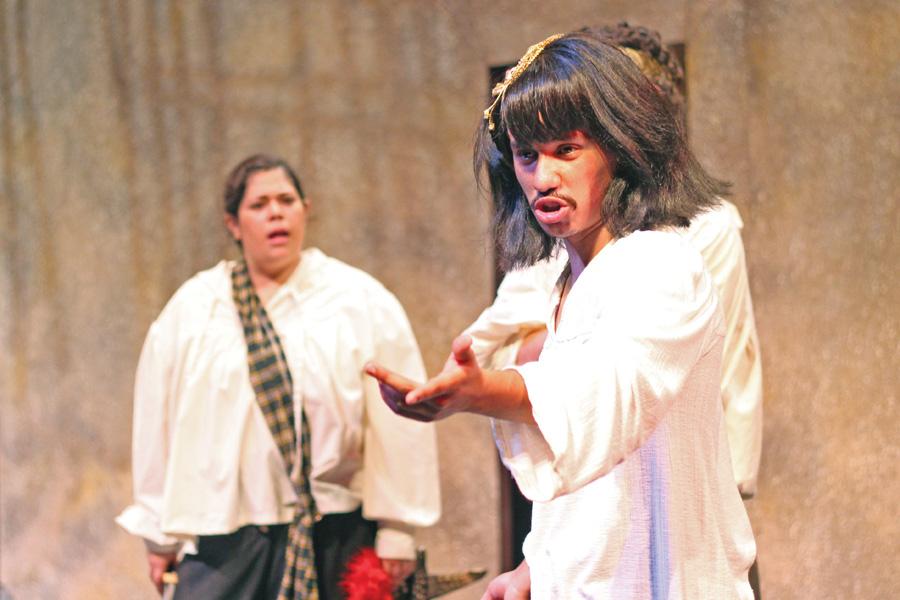 Oz Herrera-Sobal (right) speaks to the audience as Cleopatra while Stephanie Rivas (left) looks on during a dress rehearsal of “The Com-plete Works of William Shakespeare, Abridged” at the Knox Center on Oct. 20.

Improvised acting and crowd participation provided an interesting mix of comedy in “The Complete Works of William Shakespeare, Abridged” during its run at the Knox Center from Oct. 21-25.

Sociology major Nicole Brice said the silly antics and physical comedy of actors Stephanie Rivas, Justin Hernandez and Oz Herrera-Sobal set the plays in context where people could understand what Shakespeare’s featured works are all about.

“They do a good job of driving the point home with analogies that explain what happens in Shakespeare’s plays,” Brice said.

Brice, who learned about the bard’s plays, poems and sonnets in middle school, said that even though the actors were doing a little “too much” with their improvised acting and speaking dialogue, which was a bit hurried at times, the performance was funny and understandable overall.

“The (audience participation) keeps us engaged and that’s what I like about it,” she said.
Hernandez, Rivas and Herrera-Sobal tried to explain to the audience through monologues, one-liners and a virtually non-existent plot, all of Shakespeare’s 37 plays in less than two hours.

This is what makes the play performance abridged and it is also how the hilarity ensues — everything is condensed and the possibilities for comical situations increases.

Written by former founders of the Reduced Shakespeare Company, an acting troupe focusing on fast-paced, improvisational condensations of popular topics, “The Complete Works” serves as the season opener for the drama department and is directed by new adjunct drama professor Angelina LaBarre.

Computer science major Anil Lama said, “The acting was phenomenal. Each person was into the character that he or she was portraying.”

The three actors used their own names for the performance, but imitate different characters using props and go through constant costume changes.

Rivas said, “Usually in a play there aren’t many props that are used throughout, but in this play there has to be props involved in every scene to convey what we’re trying to say.”

Although there are a multitude of characters personified, with Herrera-Sobal playing most of the female characters in cross-dress, some students, like Lama, found the fast dialogue and character change a little befuddling.

“(There are) a lot of characters and each person made it confusing for me when they would switch. But after all of the topics were covered, it was great overall. It was absolutely enjoyable,” Lama said, adding this was his first time attending a live performance at the Knox Center.

Another thing the actors emphasized was crowd participation.

While light at first, the participation grew and grew as the show progressed with two audience members taking part in the play, carrying out a scene where the performers split the crowd into three sections. Each assigned a line of dialogue to an audience member to recite when called upon.

Then while the actors were motioning to the crowd, one volunteer ran across stage and the other screamed once the climax built.

Middle College High School junior Briana Sumler said the crowd involvement got the audience engaged perfectly and made them prone to participation.

Up until that point, Sumler said she and a few others started to feel their attention wane slightly.
Before the concluding performance on Oct. 25, Rivas said the show was well received and was proud of the fact that she and the production crew were able to take a lot of components from Shakespeare’s career and put them together within a two-month period.