Forgery revealed through confession from source 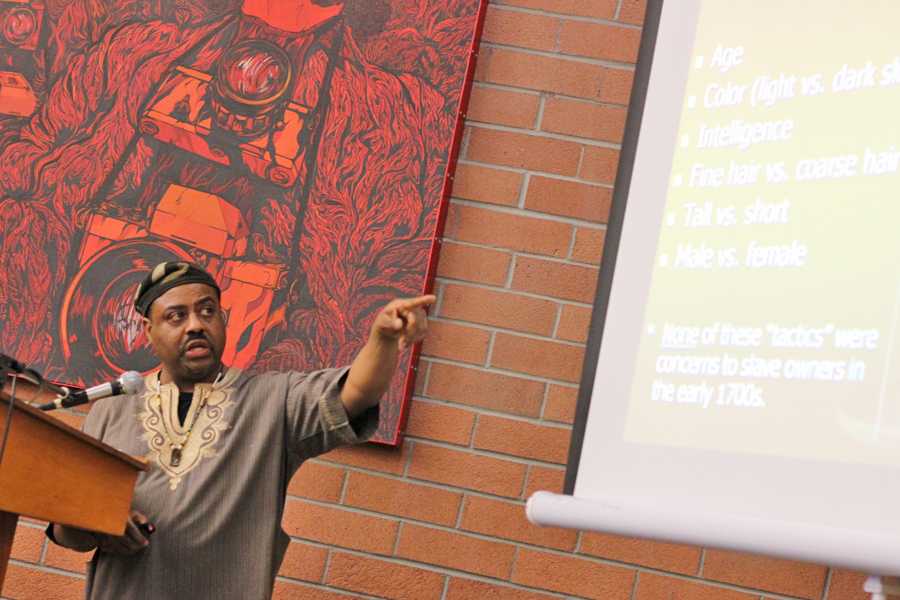 To explain and promote his book “The Death of The Willie Lynch Speech,” history professor Manu Ampim further explained his process of exposing “the myth.”

Students and faculty gathered in the Library on Nov. 5, to get a sense of the importance in professor Ampim’s piece. The book was published in 2013.

The Willie Lynch speech is a document that briefly advises slave masters on how to control black people, Ampim said. “The speech is a myth,” he said.  Through “primary research” — first hand research or going directly to a source for information, Ampim said he had been presented with a confession letter.

The confession of the alleged forger of the Willie Lynch speech, novelist Dr. Kwabena Faheem Ashanti, was all Ampim needed to fully support the finding in his research.

In order to further convey his point, he brought out other findings. There had been no evidence of the speech until the 20th century, he said

In the process of presenting his case, he wrote an essay explaining the reasons why the speech was a myth. The arising questions for clarification and feedback he received enabled him to write a second response essay, which lead to a third.

The speech first became known in 1993, after St. Louis, Missouri librarian Anne Taylor received a document from an anonymous source, Ampin said. The document was then published in the “St. Louis Black Page’s,” ninth edition.

“Documents do not just appear that way,” he said.

One good reason why the document made no sense was because of references that were made and not made, Ampim said.

He pointed out that there had been no specific country mentioned in the document. There had also been no region, during 1712, referred to as “The South,” he said. All colonies had been linked at that time.

An even greater remark had been the term, “black,” when referring to people of color. No one used “black,” because that is a 20th century term, he said, not only using the term itself, but also the capitalization of the word. There were other terms he said that were, “fool-proof or re-fueling.”

If all findings had not evidently been enough, Ampim said the chronology had been the biggest issue. He said there had been no evidence of a Willie Lynch owned plantation or had there been any physical evidence of his existence.

Half of the country’s history is based on slavery, which is bad enough he said. He then criticized the fact that the writer of the document also failed to give an outline of action for control.

Sociology major Tumyia Moore could not agree more with professor Ampim. Moore said she loved the professor’s speech, and thought it was good to have people hear his story.

The speech was thorough and clear, Aminta Mickles, human services department chairperson, said. She said some of her students had made comments about what they learned. They agreed the eagerness Ampim displayed was wonderful.

After the event, students lined up to purchase Ampim’s book.

“I don’t believe in deception,” he said. “The idea was disrespectful and unnecessary.”