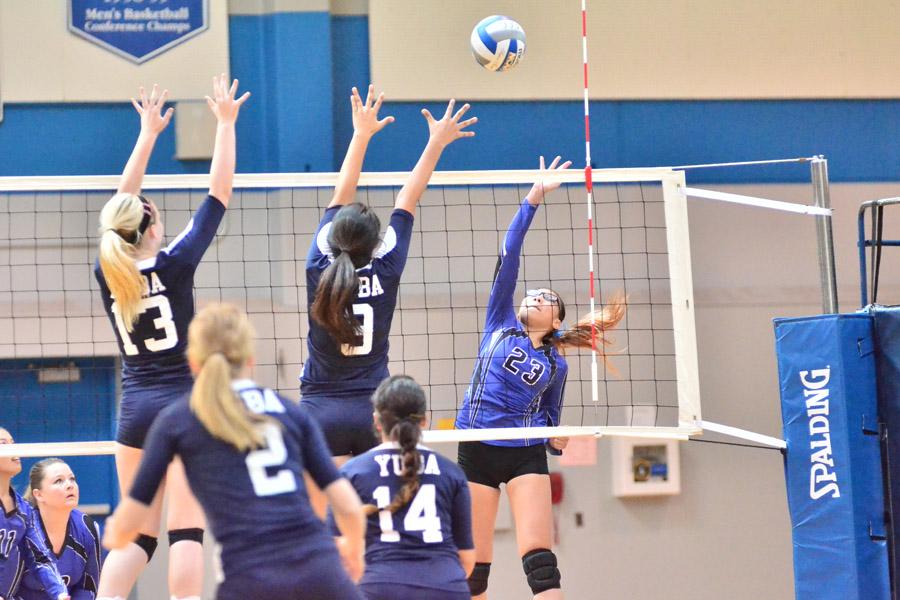 Comet outside hitter Rachelle Cuevas (right) attempts to loft the ball over the net toward 49er outside hitter Victoria Helm during CCC's loss to Yuba College in the Gymnasium on Friday.

The long practices and before-the-game jitters are now over because the volleyball season has ended for the Comets. The Comets (4-15 overall and 2-12 in BVC) ended their season on a sour note but they were still optimistic about the outcome of their season.

The Comets may have played the best game of the season when they played the College of Marin on their Sophomore Night. CCC forced the game into five sets but narrowly missed the win. That may have been the most intense and determined game the team had played all year. There were vast improvements in their play on the court as they had made great improvements to their game all season.

CCC started their season off strong but was faced with obstacle after obstacle as the season progressed. Coach Zachary Shrieve isn’t measuring his season off of wins and losses but he is basing his season off improvement. “We improved from our first game until the end,” coach Shrieve said. The Comets were lacking in the player department making every other player on the team have to step up and produce at all times.

Sometimes during the Comet games the team would come out sluggish and get better as the game progressed. That became one of the team’s bad habits that would hinder them from winning some sets throughout the season. CCC was not always consistent with its team play that would fluctuate up and down at times of the season.

Battling through injuries and going against tough competition each night, the Comets gave there all on the court each night.

Outside hitter Valeria Avila said, “Although we had obstacles, like losing our players midseason, we were still able to fight as a team.”

To top the lack of depth on the team, the Comets were hit with the injury bug throughout the season. The team lost a player after she sprained her ankle and that left the team vulnerable because they would be playing without any reserves.

CCC was the underdog all season long. Lacking in height and depth they had to rely on speed and quick striking offense to win their games. The Comets played each team with the same effort and energy. Coach Shrieve said he made sure he prepared the team for all of their matches. Avila said she wishes the team had not been too tense and nervous at times during the season.

Coach Shrieve chose not to measure his team by wins and losses because he said his team continued to improve in all parts of the game throughout the year.