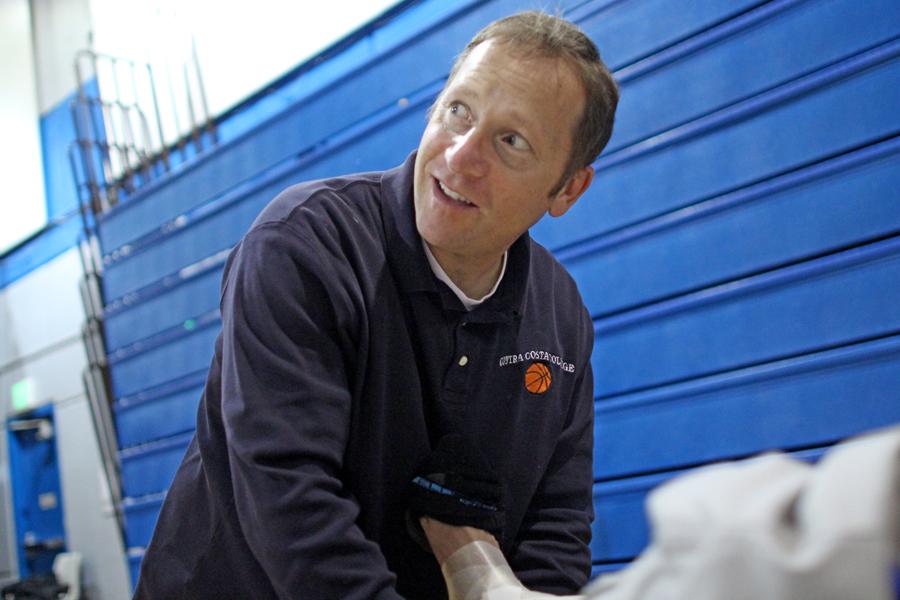 The Comet athletic department is losing a person who some say is the glue that holds the whole thing together.

Brian Powelson is the mild mannered, overly modest athletic trainer who has been the healing hands of the Contra Costa College athletic department since spring of 1994.

It only takes spending a day in Powelson’s training room to understand what makes him one of the best at what he does.

Powelson, or “B,” as everyone calls him, is leaving to train for sister school Los Medanos College in Pittsburg beginning in the spring 2015 semester. As the longest tenured trainer in the district, if any job become available, Powelson gets first choice.

“I have a wife and three kids,” Powelson said. “It (LMC) is 45 minutes closer to my house, that means 45 minutes back to my life. I can spend that time with my family. My wife commutes, we juggle kids just like everybody else — if you can find a way to make some of that easier, you do it.”

As if through a revolving door, athletes fill his training room (or lounge, depending on who you ask). He offers the same professional attention to a mix of different attitudes and body types, regardless of how major or minor the injury.

Powelson makes them feel important. Some of the athletes come from bad situations and have never had someone who cares, no strings attached. They know he will not treat them differently whether they win or lose.

They trust him — many of them confide in him.

He knows all of the athletes that he treats by name. He remembers their injuries, he knows how they like to be taped. Two-year college athletics is a turnstile of bodies, and for all of these athletes to feel a personal connection to one man, year after year, is an incredible feat.

“The reason I do this is for the athletes,” Powelson said. “My job isn’t tied to the wins and losses. After 20 years you see all kinds of ups and downs. For me it’s always been about the athletes.”

Powelson, a former high school football player, attended Serra High School and went on to graduate from Sacramento State University. After college he worked as a trainer at two Sacramento area high schools.

He was also assistant trainer for the Sacramento Gold Miners of the Canadian Football League.

Catching a diamond in the rough was a stroke of luck for the Comets. Powelson only arrived at the San Pablo campus to fill in for a friend who was going out on maternity leave.

He was only supposed to cover for her for a semester, but she never came back.

Powelson was hired soon after, but it wasn’t until 2002 that Athletic Director John Wade made the athletic trainer a full-time position.

“Losing Powelson is a tough blow for us,” Wade said. “He’s a great guy with a big heart. He puts in a lot of extra effort to make things work.”

Powelson said, “Hopefully someone comes in and does as good or better job than I have. And just do right by the kids.”

The trainer garnered statewide recognition in 2009 when he worked to save a player’s life after an incident on the football field. On the first play of the game against Los Medanos College, Comet safety Wali Wright sustained a life-threatening neck injury while attempting to make a tackle.

Powelson helped stabilize the student and performed emergency response breathing techniques that stabilized the young man until the paramedics could take over. It was later discovered that the immediate action on the field saved the athlete’s life.

That year Powelson was recognized as co-trainer of the year, and received the California Community College Athletic Trainers Association award.

The search for Powelson’s replacement has yet to yield any successful candidates.

“Ideally you want to find someone local,” Wade said. “We want a trainer who knows, has some understanding of the area’s medical facilities and some knowledge of the local doctors.”

Because of the way the budget is set up Wade cannot hire another trainer until Powelson is off of the payroll.

As Powelson’s workload shows, training is a full-time job. Athletic rainers don’t just tape ankles before a game. They administer treatment for nagging injuries like back spasms that can linger on long after a grueling season is over.

“I’m looking forward to the fresh start,” Powelson said. “The saddest thing is leaving the freshmen kids that I’ve made relationships with — they expected me to be here next year.”