When life is bigger than the game

Husband, father of two, MVP on and off the field 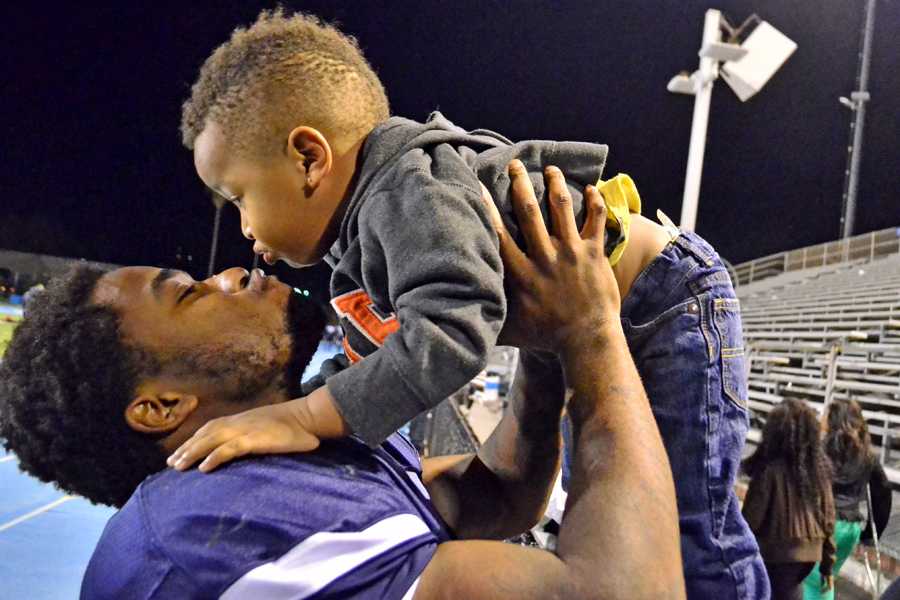 What is it that truly creates a man?

Is it when he stands in the face of adversity, courageous in pursuit of a righteous goal? Is it a man who sacrifices for his family, his children and all of the familiar things that make the road of life less burdensome?

If these tests define men then Harold Halcombe III has already accomplished these goals on a path in academia and life that has yet to reach its destination.

After leading his McClymonds High School team to a bowl victory, and tallying more than 1,700 yards rushing with 18 touchdowns, the all-league running back set his sights on Grand View University in Des Moines, Iowa.

The 1,800 miles between he and his family offered more in the way of adversity than the simple homesickness suffered by the average college freshman facing new surroundings. He returned fueled by the experience, a bigger, stronger football player and a better man.

Born in Oakland in 1994, Halcombe is the second oldest of three brothers. Since he was 8 years old, he showed a special knack for football, his mother said.

Halcombe remembers it a bit differently.

“I quit. I walked off of the field,” he said. “I was playing against my older cousins and my dad told me if I quit I couldn’t come home — I went back out there and made my mark.”

Constant match-ups versus older, larger players, and hands on training with his father, (including specialized workouts every Sunday) molded Halcombe into a champion running back and recipient of a full scholarship.

After a successful senior season and maintaining a 3.3 grade point average, the running back and expecting father chose to attend Grand View University in Iowa. The decision was effectively breaking his own heart because of what it meant for him in the short term.

“It was hard for me to hear him over the phone like that,” Halcombe’s mother, Lenisha Halcombe,  said. “I told him to look at it like a business trip; you’re not running away from your responsibilities, you are working to give them a better life.”

Halcombe is the first man on his father’s side of the family to attend college.

“Harold has always given his all in anything he does — he’s an all or nothing kind of person,” Halcombe’s mother said. “If it’s football, he plays hard; he loves hard, whether good or bad. I give him pep talks to keep him from taking things so tough.”

Halcombe suffered emotionally while away at college, as do the majority of freshmen who have never lived out of state. Add to that the inevitability of parenthood; schoolwork and the politics of collegiate football; on top of that, no familiar faces for miles.

The two players that arrived from Oakland with Halcombe were dismissed from the team, leaving him truly alone.

He flourished in practice, but seniority left the freshman hovering near the bottom of the depth chart.

With loftier responsibilities in mind, and for the greater good of the team, the freshman accepted his lesser duties without conflict. A battle raged inside of him as he weighed the positives of his decision, with the endless flood of negative feelings he had about his circumstances.

Halcombe reached his breaking point when he missed the birth of his son, Havier, while attending a school that did not have his best interest in mind.

“I’ve known Harold for a long time. I knew with the right opportunity he could shine,” Carter said. “I always told him that I would give him the opportunity to play on the next level if I had the chance.”

Halcombe made the most of his opportunity.

In his first year with the Comets, the running back garnered all-conference recognition while being named MVP of the Living Breath Foundation Bowl.

Upon arrival at CCC, Halcombe realized he was not the person he was when he left for school the first time. He was now a man.

Now married and a father of two, (his daughter Hunter was born Dec. 5) his re-unification with his family brings all of the ups and downs that living near relatives entails.

While struggling to get through a mid-season spat with his father, Halcombe used the fuel from that anger to put together his two best performances of the season.

A 27-carry, 165-yard, three touchdown showing against San Jose City College and a 25-carry 136-yard, one touchdown performance versus Hartnell College cemented his already solid chances of being named to the all conference team.

Because of the time Halcombe spent in Iowa he only has one more year of football left. He hasn’t decided where he wants to attend college next year but has had contact with several schools.