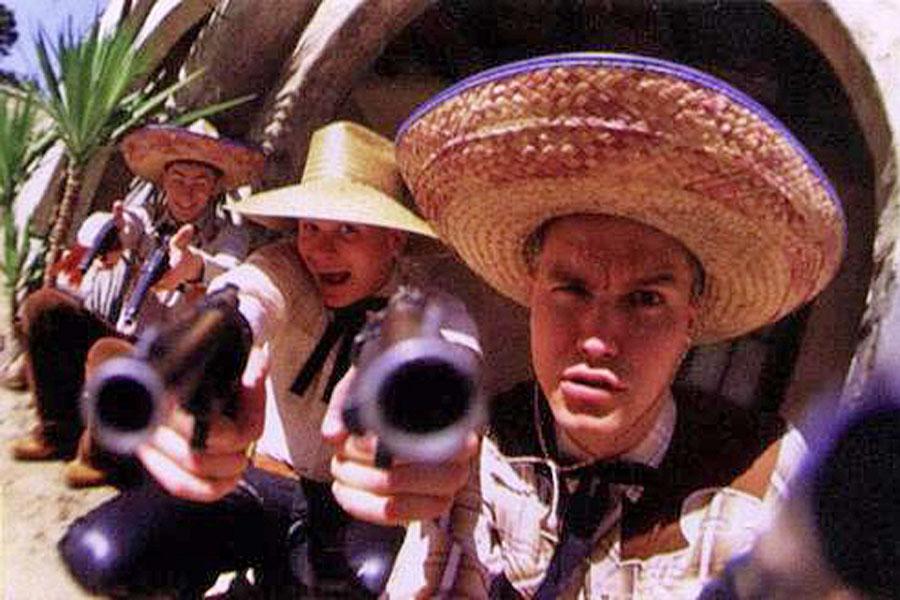 Very few musicians I listened to during my childhood and in high school, besides the classics imparted to me by my parents, have had staying power enough to make my present day playlists.

Though their later albums won’t be found among my favorites, pop-punk trio Blink-182’s 1997 sophomore studio release “Dude Ranch” will stay with me forever.

Since I first bought the album at age 10, when the pop-punk trio’s bathroom humor, disdain for authority and songs about heartbreak appealed to me most, I have come to appreciate the full depth of “Dude Ranch” in adulthood. An album that encapsulates growing up, “Dude Ranch” tackles themes of self-worth and self-loathing, pursuing non-conventional careers in the arts despite parents’ objections, how growing up in many cases means growing apart and the importance of being yourself during these trying, transitional times.

The album’s first track, “Pathetic,” is a testament to the significance of these themes and how, by taking their own advice, Blink-182 overcame adversity to become successful.

Guitarist and vocalist Tom DeLonge wrote the song after doing poorly in high school and dropping out of junior college to pursue music. His mom, who wanted him to get a “real job,” attempted to dissuade him by saying such a goal was pathetic and he was doomed to be a loser. The lyrics describe how DeLonge begins to doubt his dream and believe his mom’s harsh criticisms: “Don’t pull me down, this is where I belong/ I think I’m different, but I’m the same and I’m wrong.”

In fact, DeLonge and his band mates were different. “Dude Ranch” went on to be Blink-182’s first platinum album and the band’s following three studio releases shared the same fate.

Each of the 15 songs on “Dude Ranch” is worth a listen — for both musical and lyrical content. Simple drumming and catchy melodies make the album an easy listen and nostalgia is likely to have some effect on millennials.

The lack of politics is refreshing of a band that derives some influence from punk rock, and the songs about relationships and heartbreak are surprisingly few on this album.

Track nine, titled “Apple Shampoo,” is a song about a failed relationship. Though heartbreak is a common theme in music, Blink-182 avoids gushing here and makes an aptly worded observation that the honeymoon phase is over: “It isn’t exciting reciting the stories/ Of kind words turned hurting when routine gets boring.”

Of course, “Dude Ranch” is not lacking in the juvenile content that made Blink-182 popular with youth. Track two, titled “Voyeur,” is a cleverly worded and comedic account of a peeping Tom, likely at the expense of DeLonge for his first name.

The raunchy 13th track, “Degenerate,” depicts the awkward and indecent acts of an aging addict. I didn’t get it at first, but this song is less of a personal reflection and more of a worst-case example, effectually saying, “I know I’ve messed up, but I could have done a lot worse.”

Though I’ve had this album since elementary school, the last two tracks make more sense and relate more to my life now than they ever did before.

The responsibilities of adult life curtail the freedoms one gets accustomed to in youth, namely all the free time spent with friends. The 14th track “Lemmings” describes the author’s frustration with a friend who hasn’t seemed to change much in adulthood and expects his friends to be their old high school selves as well.

While the author attempts to show this friend the error of living in the past, he does so with empathy: “Laughing at the bands we hate, all the spots we used to skate/ They’re still there, but we’ve gone our own ways/ I know it’s for the best but sometimes I wonder/ Will I ever have friends like you again?”

The final track, “I’m Sorry,” acts as a second part to “Lemmings” in a way, depicting the author in a position to give sympathy and advice to a friend depressed because he or she is growing older. With this song, Blink-182 offers the simple but effective advice I’ve used when I’ve felt down about aging.

“You gotta get up on your feet/ ‘Cause the only way, I gotta say/ Is to move on through the week.”