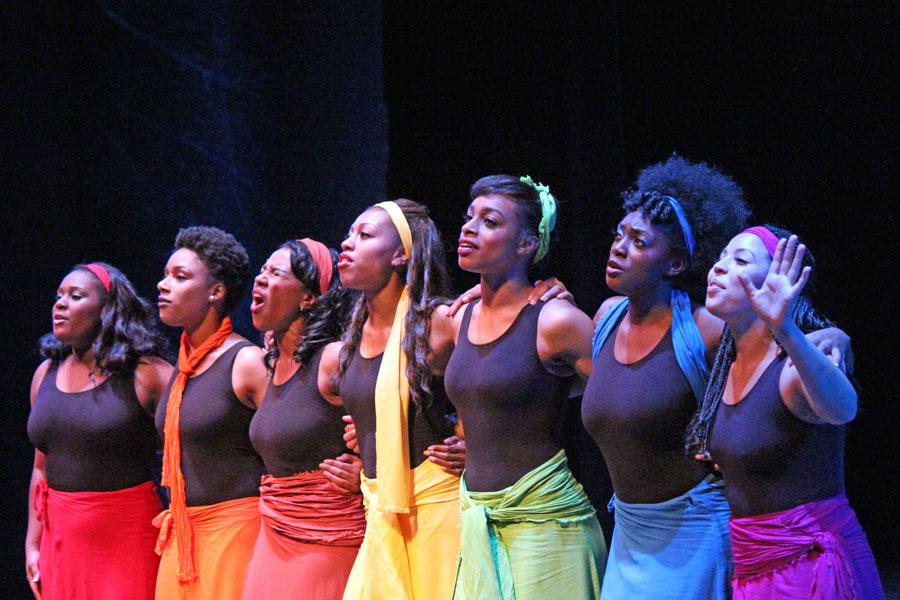 Seven African American women created a rainbow with emotional performances of the hardships and struggles faced by women on Dec. 2 to Dec. 6 at the Knox Center.

The women performed a play by Ntozanke Shange called “For Colored Girls who Have Considered Suicide/ When the Rainbow is Enuf.”

It was a stellar and emotion-evoking performance that captivated the audience.

The play depicted the hardships and struggles that African American women, and women in general, go through.

Each individual performer dressed in a different color that signified the rainbow and the strength of African American Women.

The lighting of the event also made use of color, changing the backdrop for the different speakers to provide a different feel for every performer.

All seven performers had their own side story that was expressed throughout as each took the stage to recite their lines with pure emotion.

“The rainbow symbolizes an end of a storm of the hardships women go through,” professional dancer Angelica Foster said. “It pushes women to have strength in the storm, so they can get to the rainbow.”

The play started with a smoking mist around the stage with seven African American women entering one by one, and the Lady in Brown came forward singing.

After the performers danced and discussed their sexual encounters, the Lady in Yellow gave her romanticized background story about her first time being with a man.

“This play expresses the different emotions and trials that black women go through,” theater student Brittany Turner said. “This issue is never addressed to the public.”

The play had some memorable moments by performers Lott and Hughes.

In one scene Lott got into character and expressed feelings about her experience of being with an unfaithful man who left her.

She also played the abusive boyfriend to Lady in Blue toward the end of the conclusion.

Domestic violence was discussed when Lott, who was impersonating the way a macho man would act, beat up the Lady in Blue and threw their two children out of the window.

“It gave me a different perspective because I was playing one of the women in color,” Lott said about the domestic scene.

“It was painful for me to get into character, and pretend to throw those kids out (of the window).”

Touching on sensitive issues faced by women on a daily basis added that emotional connection with the audience.

Organization was kept throughout the play and the performers knew their lines well.

The women brought life into the characters in the play, and the dancing was excellent.

They motivated each other throughout the play by maintaining unity and strong emotions.

“It’s all about unity and sisterhood,” Lott said.

The performers rehearsed for two months straight for the event.

Turner said it took a lot of practice and the help of God. The rehearsals were from 6-10 p.m.

“When everyone is there it’s complete, and that is what makes it easier for us,” Hughes said.

“The main thing is to feed off each other energy and when we go hard we motivate each other to go hard.”