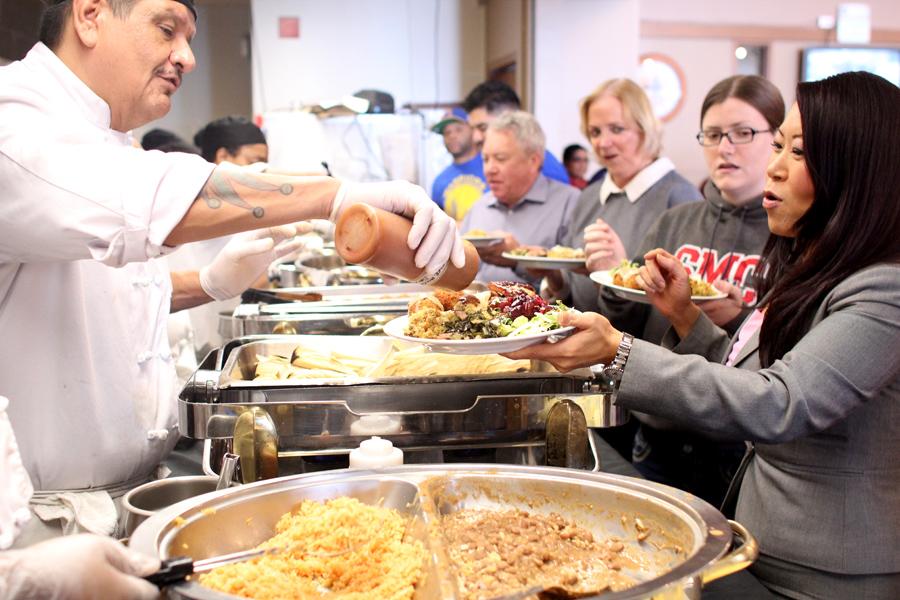 As part of a practical midterm, students from the culinary arts department greeted and served hungry customers of the Three Seasons Restaurant at the Thanksgiving lunch buffet.

The smell of traditional Thanksgiving food could be smelled past the entrance of the restaurant. Once inside, student chefs stood ready to serve the lines of people.

The place had been quickly filled with people ready to taste the variety of holiday dishes.

“I didn’t expect it to be this packed,” Lisa Ramos, business major, said.

As part of her daily routine, Ramos enjoys going in to the restaurant every morning, but dislikes the limited space when events are held.

Ramos said the food was great, so she would attend both days of the buffet event, but would have a to-go plate instead of dining in.

Though the restaurant was packed, Eugenia Sura, culinary arts major and server, said everything had been running smoothly and that there had been no major problems or complaints.

However, Majeedah Rahman, social sciences professor, said that the food looked appealing, but that everything seemed to have meat.

Culinary arts department Chairperson Nader Sharkes said there had been consideration of vegetarian options. He said they served salads and mushroom ragu with potatoes. Sharkes said the second day they had Greek lasagna, which had eggplant, tomatoes and cheese.

He said he was also aware of the limited space of the restaurant and that some were served in the cold on the patio.

“It’s just too cold. We do not have outside heaters, nor do we have the space,” he said.

Tamara Gideon, culinary arts major, had been in the department’s kitchen preparing for the event the day before the event.

“We have so much to do,” she said while prepping her dish.

Gideon said she was prepping tamales, refried beans with mole and rice and a turkey dish, which used turkey, tomatoes and salsa verde. She made sure there was enough food to serve 100 people.

The groups consisted of two per group, with a total of 11, one being a one-person-group. The first day five of the 10 would present and the other half presented on the second day.

Keeping in mind that they had to serve 100 people, Mariela Guzman and Carissa Garcia, both culinary arts majors, said they had already finished their prior day preparation. Guzman said they had been working on a balsamic lamb roast with parchment mash wit baby red tomatoes.

Alisha Lee, culinary arts major, prepared mentally by practicing before the day. “I made sure I practiced the dishes I wanted to create at home.”

She said she worked on making yam soufflé, green beans citrus salad and cheddar corn biscuit. There had been a lot to prepare, but she was confident, she said.

Though there were only minor complaints, no one complained about bad food.

Chef Sharkes said the full house for both days gave him no reasons to complain.

He said the student chefs will be evaluated on the taste and presentation of the dishes.

“The students showed outstanding work, and it will be well-reflected on their midterm (grades),” Sharkes said.