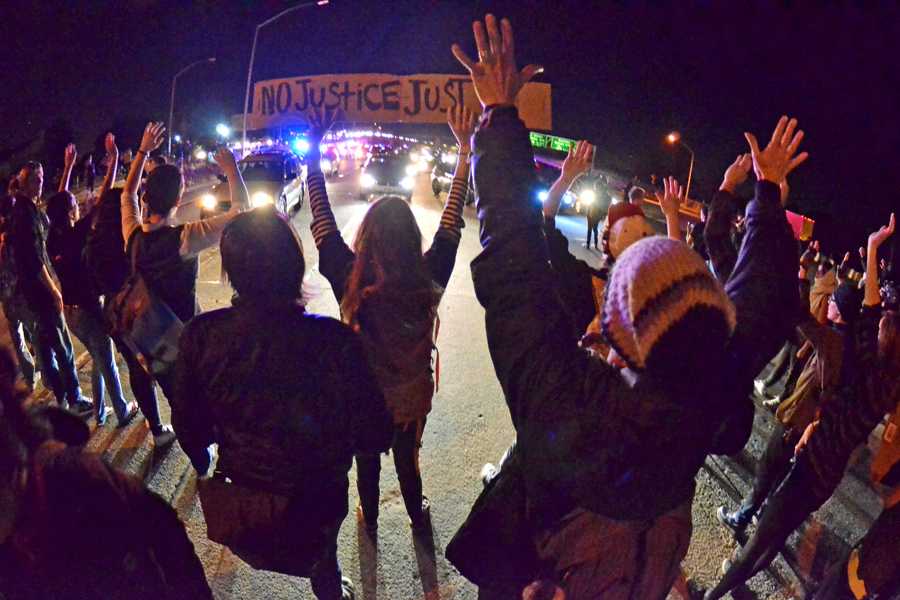 Protesters stand their ground on the i-580 highway during a protest in Oakland, Calif., on Tuesday, Nov. 25, 2014. a day after a Missouri grand jury decided not to indict white police officer Darren Wilson in the fatal shooting of black teenager Michael Brown in Ferguson, Mo.

OAKLAND — Within a week of the St. Louis, Missouri Grand Jury ruling regarding the Michael Brown case on Nov. 25, a second wave of protests swept the U.S. following a similar grand jury ruling.

The graphic video depicts Gardner repeatedly saying, “I can’t breath,” as Pantaleo sucks the life from his face. The clip went viral on social media sites and YouTube.

On Dec. 2, the Staten Island Grand Jury ruled that there was not enough evidence to move forward with charges against Pantaleo for killing Gardner.

People protesting in cities across the U.S. are outraged that another case of police brutality escaped thorough examination within the judicial system.

Contra Costa College political sciences professor Leonard McNeil said this civil unrest has escalated quickly because the issue is not isolated to a single African-American death by a Caucasian police officer.

Within four months, the five encounters between Caucasian officers and African-American men and children in which lethal force was used have gained national attention because of protests.

“I don’t see this civil unrest as rioting,” McNeil said. “They are uprisings against injustices. These people are responding to their poor social and economic situation with righteous anger.”

Akai Gurley, 28, was shot and killed in a dark stairwell of a Brooklyn apartment complex by New York Police officer Peter Liang on Nov. 20.

These encounters were not caught on tape. The following incidents in which lethal force was used were recorded.

John Crawford, 22, was shot and killed for carrying an airsoft gun at a Wal-Mart in Beavercreek, Ohio on Aug. 5.

Twelve-year-old Tamir Rice was shot by officer Timothy Leohmann for walking around a park with a BB gun that resembled a handgun in Cleveland, Ohio on Nov. 22.

Both of these events where caught by nearby surveillance cameras.

Contra Costa College District Police Services Lt. Jose Oliveira said, while there is no way to prove that these officers used lethal force because of racial biases, it can be argued that excessive force was used.

“But officers do have other ways to detain suspects beside using their firearm,” he said.

The California Department of Justice requires that all officers complete the Police Officer Standards and Training.

Part of those requirements is that officers must complete the Force Options Simulator (FOS) course, a four-hour-long course that tests an officer’s ability to react to potentially life threatening situations with reasonable use of force.

Oliveira provided The Advocate with the lesson plan listing the course goals and objectives.

The FOS is intended to increase awareness of current laws and department policies regarding use of force through a lecture and power point.

Using an LCD projector, a screen and speakers, the officers stand opposite the screen and are required to discern whether the person on screen was a threat appropriate to lethal force.

He said, “There is a scenario where a suspect reaches into his back pocket and seems to be reaching for a gun but pulls out a wallet instead.”

The officers are being tested for their split second reactions to either use lethal or non-lethal force.  The course also trains officers on how to use each weapon and where they are located on their person.

When asked if these recent lack of indictments are justified, Oliveira said that it is difficult to determine because the laws that govern reasonable force are different in some states.

McNeil argues that officers across the country should be given extensive mental health screenings and proper firearm training before being given protection from the law.

Oliveira said that many news groups such as CNN and Fox News relay “slanted” information regarding the protests that only focuses on property damage while avoiding the larger issues surrounding the use of force and grand jury rulings.

McNeil said, “People are responding to being subjugated to sustained oppression and exploitation and when they finally revolt to contest injustice they are vilified by large media groups. It makes me angry. I’m so angry, but the more I think about it, it saddens me.”

These demonstrations managed to bring freeway automobile traffic to a halt in cities across the U.S. to bring attention to police brutality that goes unpunished.

The Advocate reporters and photographers were in Oakland the night after Wilson was not indicted and followed the protesters until they shut down Interstate-580 on Nov. 26.

Oakland resident Obi Santos yelled, “Indict, convict, send those killer cops to jail,” through a megaphone from within a mass of protesters headed south along Broadway from Frank H. Ogawa Plaza.

Protesters responded, “The whole damn system is guilty as hell,” which resonated over the sound of drums, breaking glass, sirens and helicopters circling overhead.

McNeil said, “Courts have to deal with police violence the same way they do with gang violence. How can they call for law and order on the streets without having order in the law?”

Caucasian Ronald Langford was part of the crowd of protesters that was halted within 50 feet of his house on Franklin Street as they attempted to reach nearby freeway on and off ramps.

On the front steps of his house overlooking a sea of protesters, Langford said, “I feel so positive about all of this. I’m glad to see my fellow Oakland residents speaking out and fighting against this injustice. I’m very proud of my city.”

African-American San Francisco resident Olivia Cotton said she was marching in protest of Wilson not being indicted of the use of excessive force.

“It doesn’t matter if you’re black or white,” Cotton said. “If you shot an unarmed person six times you should face justice.”

The peaceful demonstration, however, dissolved into violent acts of vandalism as the night got older.

The police declared the demonstration an unlawful assembly when fire lines were created with trash cans minutes after protesters tore down a fence on Telegraph and 34th Street to trudge up the hill onto the freeway.

Oakland, California had the largest number of arrests in Ferguson-related arrests in the U.S last week as a result of the Brown verdict.