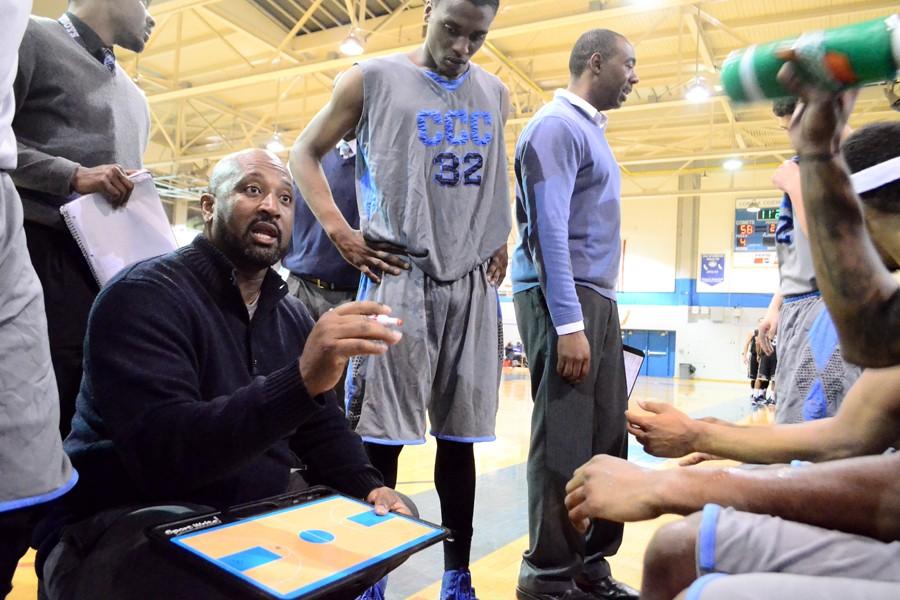 The Comets returned to the comfortable confines of home, where they have only one conference loss this season, and fought back the surging Storm to escape with a 63-55 victory on Jan. 22 in the Gymnasium.

A strong defensive play mentality was stressed by Contra Costa College’s (9-9 overall 6-2 in the Bay Valley Conference) sophomore leaders coming into the game.

Napa Valley College’s (7-12 overall 2-6 in the BVC) conference play has not been so generous. Having lost three of its last four, the team still shows signs of life and has formidable weapons on its roster.

“They have some big guys on their team and they can shoot,” CCC coach Miguel Johnson said. “We have to close out on shooters, and play at our tempo.”

The Comets started slow, as some of the team’s usual sparkplugs were missing open shot attempts.

The Comets fought their way out of an early deficit to pull within 1-point on a Pekelo McKenzie 3-point dagger with two minutes remaining in the first half.

The first half was filled with solid runs fueled by neither teams’ ability to fully shut down the dribble-drive. At halftime the Storm led 24-28.

Before the game, CCC assistant coach DeAngelo Mack said, “The best thing about this team is that they don’t quit. There are some noticeable differences on the team now compared to what we were when the season started. Its good to know that when things get tough you have guys that want to be there.”

The Comets amped up the defensive intensity after halftime to convert two shots in the paint early. Yet, mental mistakes (like not grabbing rebounds with two hands) led to turnovers and granted the Storm with the same 4-point lead they had at halftime.

Throughout the second half CCC failed to find its offensive continuity. As minutes ticked on, the undersized squad seemed drained by the constant banging with the Storm centers and forwards.

Johnson single handedly ignited the Comets’ offensive fire by sparking a run with a break away two-handed dunk to tie the game at 50.

The dunk was followed by a Tajai Johnson (16 points 8 rebounds) 3-point play that gave the Comets the lead.

CCC fought through adversity on a night that saw its usual big shot makers have off shooting nights. It was timely rebounding, good defense and a never say die attitude that allowed the squad to capture victory.

They will need to maintain that mentality if they want to continue their winning ways Saturday in Oakland against Merritt College at 1 p.m.