Gallery provides first step into a life of artistry 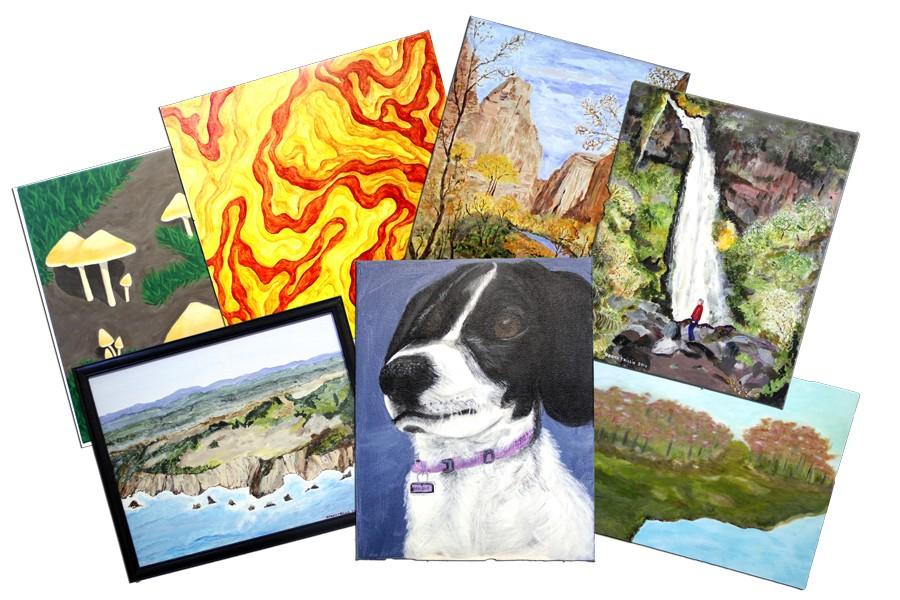 An all-student art exhibit is on display in the Eddie Rhodes Gallery now through Feb. 26.

A reception was held for the student artists on Jan. 20 and garnered a pleasant, albeit small, turnout of friends, family and college employees. Though slim attendance at artist receptions has been somewhat common at CCC, art students and professors remain optimistic to share what the department has to offer.

“Giving students the chance to hang their work in the gallery shows what people here (in the art department) are doing,” Bloom said. “We’re not professionals. If any student comes in here and really works at it, they can do it too. You don’t have to be a pro.”

“(The gallery) shows what types of artistic opportunities are on campus. It’s a way to bring new talent to the department,” she said.

Owens played a large role in getting “New Art for a New Year” set up, acting as liaison between the student artists and the acting gallery curator, adjunct fine art professor Dana Davis.

Davis, who personally hung every piece in the gallery, shares in the pride felt by the featured artists who all believe the exhibit bears a strong sense of balance and composition. Despite differences in style and medium among the pieces, the exhibit does well as a whole without allowing any individual piece to be detracted.

“If everyone comes out looking the same, if you ask me, you’ve got a problem. And I have to say no one looks the same,” Davis said. “Every artist has an individuality to their work and I’m really happy to see that.”

“You bring the knowledge that you have and everyday you look for a new challenge,” she said. “You can do the same thing over and over again, but you end up with copies. We don’t want copies — we’re painters, not producers.”

Callardo has five pieces hanging in the gallery, all of which are acrylic on canvas, but are strikingly different between subjects. Each of the pieces has a different inspiration, reflecting situational motivations and challenges that change from day to day, she said.

Owens works primarily in graphite on paper, but also paints with acrylics and pastels.

She said for most of the pieces she has in the gallery, her inspiration came from the many unique dog breeds she encounters as an owner of six and a regular at Point Isabel Dog Park in Richmond.

Owens said she is very appreciative of the creative opportunity provided by this gallery and encourages students to peruse the works on display.

Callardo said she would have liked to see more students at the reception. Just by attending a reception, students from outside the department get a chance to appreciate artwork, talk with artists, get a feel for the department and consider learning a new art form, she said.

Owens said, “We could have had a few more people come out, but it was a nice turnout. The new college president came by and so did the department dean — that was really exciting.”

Davis said, “This gallery came hot on the heels of winter break, so it was difficult getting the word out in time.”

Students and contributing artists should feel safe to display their works in the Rhodes Gallery as the gallery and its contents are insured, Davis said.

“If something is damaged or stolen, we are covered. It sounds scary, but we haven’t had any problems yet,” he said. “That’s why it’s insurance — it’s there just in case.”