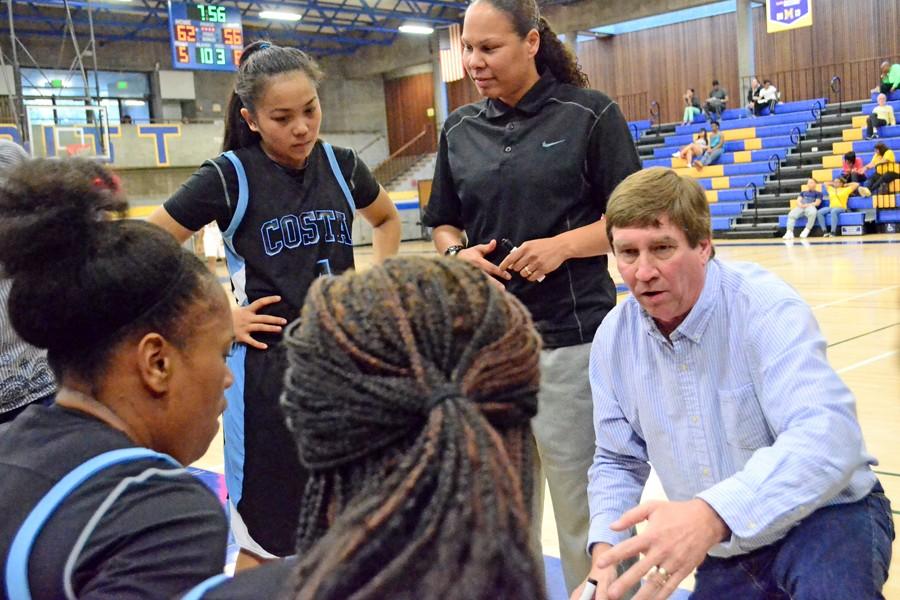 OAKLAND — The women’s basketball team (9-10 overall, and 6-3 in the Bay Valley Conference) entered the teeth of its conference schedule as teams jockey for their playoff lives, facing Merritt College (12-9 overall, and 7-2 in the BVC) and coming away with a 82-69 loss Jan. 24 in Oakland.

With three teams gridlocked at 6-2 coming into Saturday, this game had a heightened sense of importance for both teams. Solano and Laney both won their games and sit atop the BVC standings at 7-2.

After losing the first in its last five games, CCC  plays against the College of Marin in the Gymnasium at 7:30 tonight.

These teams are no strangers to each other, having met in the Comet BVC opener in San Pablo on Jan. 3. In that contest CCC downed the Thunderbirds 88-77.

Jacqie Moody was impressive as usual tallying 17 points and 10 rebounds in the loss. Yet, it was the backcourt of Ahjahna Coleman 11 points, 10 rebounds, six assists and Lenzie Chao 15 points, two rebounds, and three assists that sparked a scoring surge that brought this game from the verge of a blowout to a contest CCC was capable of winning.

“They handled our pressure better than before and we gave up a lot of good looks,” CCC coach Paul DeBolt said.

Merritt controlled the paint and the tempo of the game early, jumping out in front and taking a 36-24 lead at halftime.

Although 12 points is not an insurmountable obstacle for the Comets to overcome, the squad couldn’t find a comfortable offensive rhythm early, which left the team settling for 3-pointers and long jump shots.

Finishing with nine points, T-Bird guard Gabby Gaines found her way into the paint often. With two true centers on the roster Merritt was able to get second chance opportunities, using its space eaters to gain crucial rebounding position against CCC.

In the second half, the Comets came out with a renewed vigor that was noticeably absent from Saturday’s contest.

The zone rotations and ability to recover after ball rotation was less than stellar for CCC, allowing the T-Birds to come away with a lot of open shots.

Coleman continued her assault on would-be defenders, yet the contact she incurs went un-noticed by the refs. The guard finished 4 for 6 from the free throw line, a stat that should have easily measured 10 attempts.

“There is a lot of double teaming going on so I get used to the contact,” Coleman said. “If the refs aren’t going to call fouls I can still penetrate and kick it out to an open shooter.”

The final 12-point margin of Victory for Merritt may be indicative of the bout, but in no way reflects the efforts the Comets displayed in attempts of stealing this game away in its final minutes.

Chao continued her inspired play earning three steals in the previous match against Napa College. Two of them were momentum-changing plays when Napa seemed poised to go on a run.

Against Merritt, the diminutive Chao again made her presence known igniting the Comet comeback push, nailing five timely second half 3-pointers in the process.

“I didn’t force any of the shots. I was patient and let the ball come to me out of the double teams,” Chao said. “Hopefully I can build on this and it will carry throughout the rest of the season.”

Finishing with 19 turnovers and 18 assists in the game, it is clear to see why the CCC offensive output was so herky-jerky. For every Comet possession that saw a good pass lead to points, just as many opportunities led to turnovers or bad shots.

“It has been something we have been addressing all year,” DeBolt said. “It’s nothing they’re doing physically wrong, it’s all mental — it’s power of the mind.”

After cutting the lead to six with nearly two minutes remaining, the T-Birds hit two 3-pointers late to seal the win.