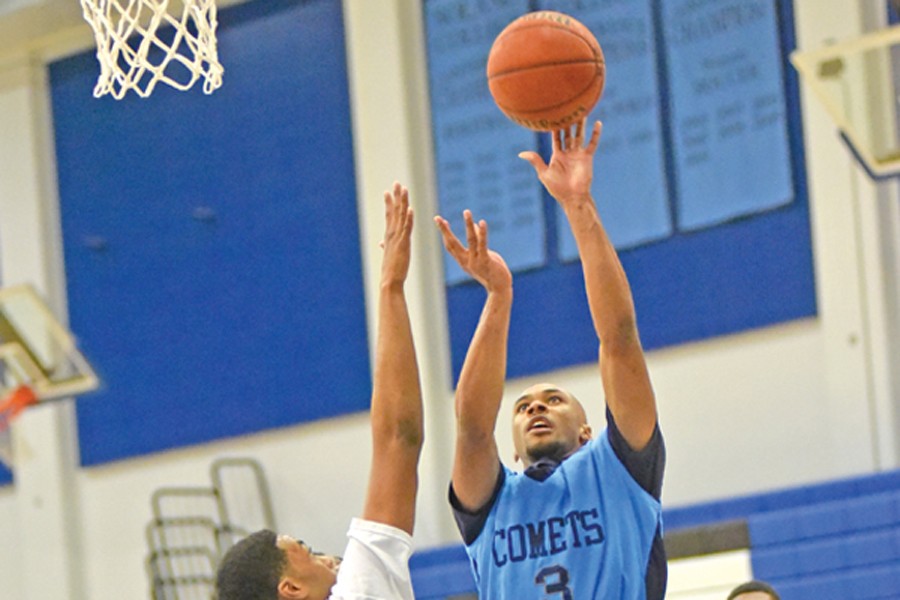 FAIRFIELD — The men’s basketball team established its lead early and never looked back in its 68-54 win at Solano Community College to keep its playoff push going strong on Friday.

Contra Costa College’s (10-11 overall, 7-4 in the Bay Valley Conference) sophomore players vowed to make a concerted effort not to let this season slip away.

With partial control of its post-season in hand it will take defensive communication and a collective offensive output to keep things moving toward its collective playoff goal by winning its five remaining games, starting tonight at the College of Alameda at 5 p.m.

“We felt like we had everything on the line and they had nothing to lose,” Comet forward Trenton Smith said. “Once we had them down, we couldn’t take our boot off of their necks.”

Midway through the second half Comet point guard Dawson Johnson found himself in the paint on a stalled fast break. But because he gave up on his dribble, his only option was to pass the ball off of the backboard to himself to complete the lay up over the much taller Falcon defender.

Neither team was able to make its mark and exchanged baskets through the opening minutes of the first half.

With 11 minutes remaining in the first half, Comet coach Miguel Johnson substituted in his usual performer when they were trailing by two points.

Comet sophomore guard Tajai Johnson got the action started first and finished with two strong driving back-to-back layups, which swung the momentum in the Comets’ direction.

“We want to use this win as a stepping stone toward getting into the postseason,” Tajai Johnson said. “I watched a lot of film before this game. I wanted to see what we could do to get better as a team.”

Two more conversions extended CCC’s lead to six. With about four minutes left the first half the Comets were nursing an eight-point lead and a heads-up steal by forward Phillip Seacrease led to another hustle score by forward De Andre Russell.

Another Johnson jump shot gave the Comets another opportunity to challenge the Falcon ball handlers with a full-court press and make SC work to maintain possession. The Solano guards dominated the ball for most of the game and never sought to establish a low post presence.

The strategy left the fledgling Falcons to live, or in this case die, by the jump shot.

With 1:50 remaining in the half and a 25-11 Comet lead, Solano continued to settle for long 3-pointers and dribble drive and kick outs. Both were ineffective as the Comets held onto their lead by closing out on shooters, which was paramount in their game plan.

Coach Johnson said that he has seen this crop of Falcon guards shoot themselves out of big deficits at home earlier this season.

In the closing seconds of the half, Dawson Johnson anticipated a Falcon pass and intercepted and layup to put the squad up 16 points just before the break.

With a firm 15-point lead 10 minutes into the second half, coach Johnson rotated the entire team in a mass substitution pattern. The squad held onto its lead but after two unforced errors it dropped to five.

The Comet lead was cut to 12 as the Solano shooters finally began to find their mark.

The Falcons started to run a zone defense to keep Comet players out of the paint and to settle for outside shots.

With spot-up shooter Byron Buckley having a lukewarm January, and other Comet guards more comfortable driving into the lane, the responsibility of keeping a defense honest by respecting the outside shot usually falls on the shoulders of sophomore floor general Dawson Johnson.

The Falcon guards have a history of wiggling their way back into games at home, but any scoring runs made by the home team were quickly squashed by a big shot or timely pass by Johnson.

With 4:44 remaining in the game, the Falcons found their touch and cut the lead to 12. They could never get consistent stops on defense.

In the end they fouled on every possession to stop the clock. The Comets made their free throws and left with a much-needed 68-54 road win.