Comets climb to third in conference standings, above .500 in Mendocino rout 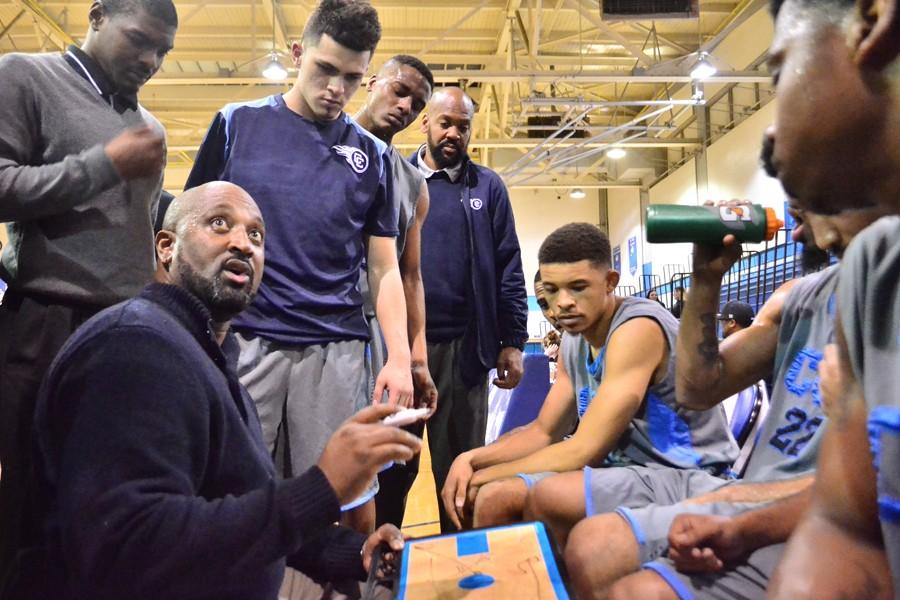 The men’s basketball team won its third game in a row to climb back over .500 for the season with a 95-80 win over Mendocino College Friday in the Gymnasium.

With only three conference games remaining, the streaky Comets (12-11 overall, 9-4 in the Bay Valley Conference) will face their biggest test of the season against second place Yuba College tonight at 5:30 in Marysville.

“We want to ride the momentum but approach each game separately,” Johnson said. “In preparation, it’s about knowing the personnel — who will be the drivers who will be the shooters.”

Sophomore Tajai Johnson led the squad with 28 points and six rebounds against Mendocino. He highlighted his performance with a breakaway left hand dunk that capped a 9-2 CCC scoring run in the second half.

The jump shot heavy Eagles (9-13 overall, 5-7 in the BVC) got out to an early lead making two quick 3-pointers. The Comets responded with a driving layup and foul to give the home team the early lead.

An up-tempo contest throughout, MC’s reliance on outside shooting left many rebounding opportunities for the Comets. Phil Secrease and Lowell Hall crashed the boards at every opportunity and extended the lead with numerous second chance put backs.

Secrease showed flashes of the defensive prowess he exhibited during non-conference games, using his length to alter shots and deter dribble drive opportunities by opposing guards.

“We had a lot of carry over from the last game,” Secrease said. “When we got up we didn’t let up — we want to keep it going against Yuba.”

Holding a six-point lead at 19-13 with 12 minutes remaining in the first half, the Comets chose to play to the Eagles strength. They began to match Mendocino by forcing jumper after jumper.

Over the short run CCC had quietly extended its lead to double digits.

“It’s important for all three Johnsons to get it going early in games,” Justin Johnson said. “Every game is important — we know the situation we are in.”

An exciting block by Secrease off of the back of the Eagle shooter’s neck brought a rise out of the home crowd and ignited a fast break.

But the team could not capitalize on the energy. It instead opted for a half-court pass for an alley-oop attempt resulting in a dazzling turnover.

In the second half the Comets seemed confident they had the game won, but knew there were some areas that needed tightening up in order to make a successful playoff run.

Inconsistencies that were apparent in the first half, like a lack of defensive communication, forced coach Johnson to implore his sophomores to become vocal leaders on the court.

Newkirk used a bump and grind style offensively to wear down defenders. He then used his frame to limit clear lanes for driving to the hoop on the other end.

Brown used his length and effort to stay with his man. The guard even pinned a would-be layup to the glass drawing late game gasps from the crowd.