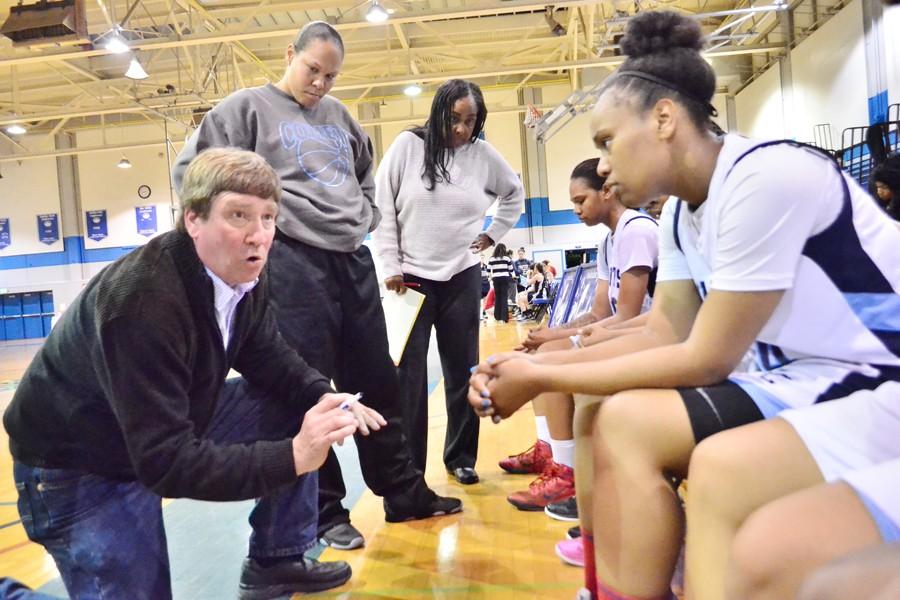 The Comets put together consecutive blowout wins for the second time this season beating hapless Mendocino College 64-30 Friday in the Gymnasium.

Contra Costa College (11-12 overall, 8-5 in the Bay Valley Conference) looked to capitalize on the positives from a 90-62 spanking of Laney College and not underestimate a lesser-ranked opponent.

Sitting in fourth place in the BVC standings, percentage points behind Merritt College, it is not mathematically impossible for the Comets to squirm their way through the back door into the playoffs if the top three teams are selected.

This was the second time the teams have met this season. Jacqie Moody scorched the Eagles for 29 points Jan 13 at Mendocino College (0-20 overall, 0-2 in the BVC).

“I scored more from the high post in the first game,” Moody said. “In this game I took advantage of the smaller defenders they had guarding me and got more shots on the low block. They kept fouling and I came through from the free throw line.”

Moody made 12 of 15 attempts from the free throw line.

Early in the second half, Mendocino’s defeat was already imminent. Instead of yielding to the Comets, the Eagles chose to foul hard in attempts of baiting the home team into earning technical fouls or ejections.

“If they are going to play like that and we don’t match their aggression that’s when people get hurt,” Comet coach Paul DeBolt said. “Emotions get out of hand. That kind of stuff can lead to fights.”

DeBolt rallied his troops and after a series of excessively rough fouls went uncalled by officials, he told them not to fall into the Mendocino trap and take it out on them on the court.

“We pressed them hard and got some good shots over about a four minute span. After that it was basically over.” DeBolt said.

The Comets took a four-point lead early but MC quickly knotted the score at 8. A rare early 3-pointer by Sydney Vidal ignited the Comet offense, propelling the squad to a 17-11 lead with eight minutes remaining in the first half.

Comet guard Carol Oldan kept her shooting touch from the Laney game finishing 5-10 from behind the 3-point line and totaling 19-points.

Coleman continued to find crafty ways to get onto the score sheet. As the focal point for most opponents’ defenses, she routinely gets double-teamed. Scoring 39 point in the last two games, she always finds some way to be productive for the team.

Another Oldan dagger boosted the CCC lead to 27-18 with a minute to go before halftime. At the intermission the Comets led 33-18.

Oldan and Moody continued their assault on Mendocino defenders after play resumed.

An Oldan 3-pointer on which she turned and walked away from the basket before the ball had reached the rim, gave the squad its largest lead of the night at 48-25 with about 11 minutes left to play.

Moody and Lenzie Chao closed the game out for the Comets. Moody continued her strong inside play, which was highlighted by a 3-point play following a three-quarter court length touchdown strike from Oldan, that fell into Moody’s hands in stride, allowing her to make the layup and go to the line after she was fouled on the way up.

Chao ended the torturous night for the Eagles by draining a right-wing 3-pointer with 35 seconds remaining in the game, sealing a 64-30 triumph for the Comets.